IF THERE is one type of cuisine that really hits home for me, it is BBQ. I grew up in a small town outside of Atlanta where barbecue joints were as concentrated as the traffic on I-85 every afternoon at 5 p.m.

So when I relocated to the Lowcountry a few short years ago, I was disappointed at the relative lack of available barbecue restaurants.

Thankfully, our city finally wised up and passed ordinances allowing food trucks to begin operation within Savannah. With the change, one of Savannah’s most popular food trucks and barbecue stops, Roy’s Nutz & Buttz, was born. 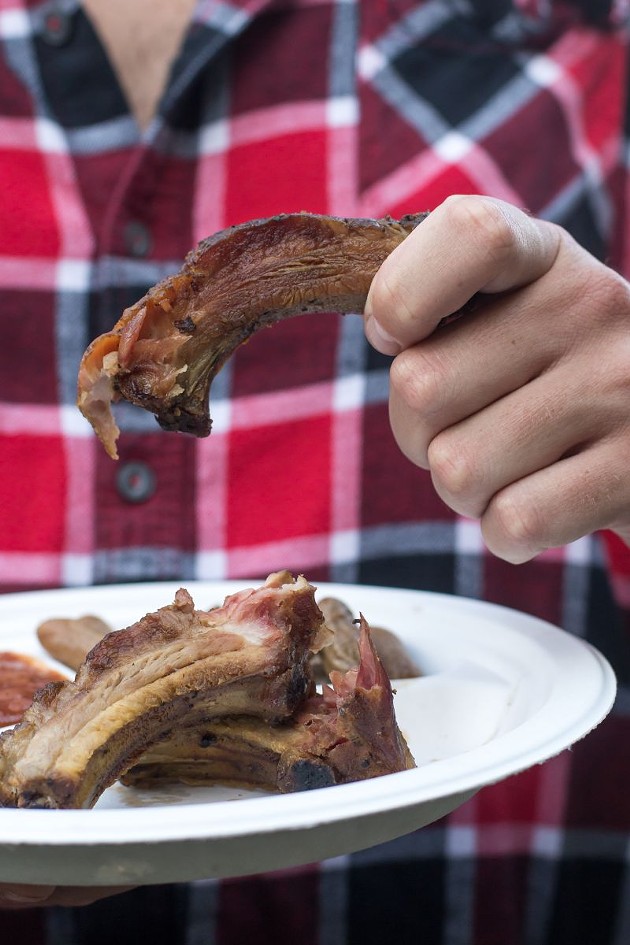 Owners Roy and Mandy Chambliss both had nine-to-five jobs before they took the leap to crank up their wheeled walk-up. Just as much experience as they both have in the business world, they have even more when it comes to barbecue.

The story of this American dream truly began when Roy learned to barbecue about 20 years ago, while coaching his son’s travel baseball games. According to Roy, the barbecue was an effort “to raise money” for the team, and he learned by purchasing “a little grill from Sam’s and burning a lot of meat”. Now he has a professional smoking rig that can feed at least two-thousand people per day.

Roy’s choice in wood is pecan and red oak because “[the oak smokes] hotter while [the pecan] gives the meat a sweet taste,” he explained as I peppered him with questions while attempting to learn the process.

Roy went on to explain that for the pork, he cooks it “for at least twelve hours per butt,” and he smokes the protein for four hours before wrapping it to prevent oversmoking. 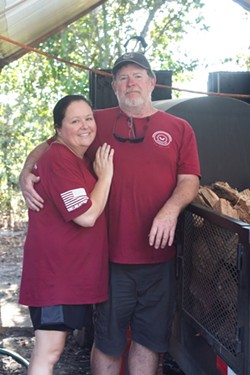 Roy and Mandy in front of their beloved smoker.

Let’s start with the Chicken Bomb, a chicken sandwich like no other. Dishes like this are the reason I love to visit and review more relatable restaurants. Though popular in many newer places, it is special to see a mom-and-pop that offers new and unique takes on classic dishes.

The base of this sandwich is a slow smoked piece of chicken coated in buffalo sauce and layered with a mound of gooey house-smoked (obviously) buffalo chicken dip, smoked crispy thick cut bacon, and a torrential downpour of creamy ranch.

Commonly buffalo chicken sandwiches feature fried chicken, but I prefer the smoked chicken because it retains much more moisture and flavor. The bacon acts as the crunchy element, in lieu of breading. And if crunchy bacon is your thing, this smoked bacon is colossally crispy.

Another extremely unique offering is the Gonzo dog. Though of course smoked (I would expect nothing less from Pitmaster Roy), the dog’s twist comes with a stuffing of cheese before being encased in bacon.

Yes, the same crispy crunchy bacon described above. Smoking the hotdog allows the bacon to properly render its fat and crisp up, which often doesn’t happen with bacon wrapped meat. After your teeth pierce the guarding layer of bacon and through the juicy meat itself, your mouth is flooded with melted creamy sharp cheese.

The burger is smoked as well, and be warned once you taste a smoked hamburger you will never want it cooked any other way. Smoking the beef allows the burger to be cooked through without becoming dry or making the meat tough. You get the flavor of a traditional American cheeseburger alongside a whisper of smoked meat.

As for the side items, every single one of them are so delicious they could be featured as main. Roy’s Brunswick Stew is award winning; it placed second in the professional category and third for the People’s’ Choice award of the 2018 Brunswick Stewbilee competition. 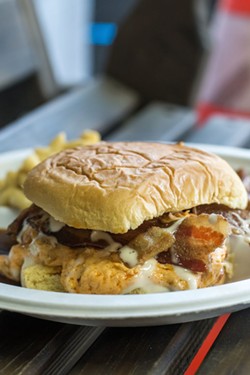 Want to know why? Roy’s is the only restaurant around town using brisket in their stew. Traditionally the stew includes pork and sometimes chicken, but Roy included all three smoked meats. The recipe also excludes potatoes, a filler for the stew traditionally used to stretch the amount it will serve.

The baked beans are not overly sweet. Instead they are balanced by Mandy’s addition of chili sauce. Cooked down with the beans you will find green peppers, which add a touch of brightness to the Southern staple. The combination of the two additions give these beans an overall peppery flavor with the finish of a hint of the traditional sweetness.

The Macaroni and Cheese is made the way that I prefer, creamy and not baked with an egg like many southern versions of the side. The flavor of cheese is deep, due to the use of sharp American, Monterey Jack, and Colby. Distributed about you will find a sea of cracked black pepper, a perfect touch to cut through the richness of three cheeses.

Let’s not forget about the barbecue sauce. Besides the actual smoked meat this may be the most important offering.  The idea for Roy’s signature sauce, a Honey Jalapeño Barbecue Sauce, surfaced when he was sampling barbecue at a local joint in Arizona.

After returning to Savannah, he spent a little bit of  time attempting to recreate the sauce before perfecting his own. The sauce “is probably their most popular” and is made with a purée of fresh jalapeños.

For the people that think it the honey jalapeno barbecue sauce is too spicy, Roy, made a hickory salve and as he was doing a lot of jobs in South Carolina, “everybody asked [them] for a mustard based one, so that is what I did,” Roy explained as he told me about his other two barbecue sauce creations.

The mustard version is reminiscent of a smokey spicy honey mustard, while the hickory is closer to a traditional barbecue sauce without so much sweetness.

The menu is only going to get larger, and Roy and Mandy have been working on a brick-and-mortar sit-down featuring a large menu and new creations. Their quick success is due to love of the food, each other, and serving people.

As Mandy put it, she “has the most amazing job in the world.”