Exhibit at Beetnix spotlights the good in the world

WHAT IF random acts of kindness were a little less random?

“Gesture Studies” is Rubi McGrory’s newest artistic venture, one that came about after her trip to the Women’s March on Washington this past January.

“So many things about it were really moving,” McGrory remembers.

“A lot of things were just simple little acts of kindness, like letting a woman and child to the front of the line. So that, combined with all the divisive rhetoric we’ve been experiencing and people holding signs demanding kindness, compassion and empathy, all came together and I realized, maybe it’s time we start sharing stories of the little things or the big things or anything.”

That’s when McGrory set up her website, All the Good Humans, complete with a submission box for people to tell their stories. After collecting plenty of tales of good deeds, she painted them onto pieces of cardboard, accompanied by images done in bright paint.

“I have a lot more stories, but sometimes it’s hard to figure out the imagery that will immediately translate,” she says. “It’s almost like I’m creating icons for these stories. Sometimes it totally jumps out at me, where others I really had to work at to figure out, how do I tell this story so it will be visually interesting so you’ll want to go read this story?”

Once you read the story, though, you’ll certainly be inspired.

The stories are short, anonymous, and describe a range of kind acts, from buying a homeless person coffee to lending a stranger a GoPro camera to removing swastikas scrawled in the subway. Not all of her stories have been submitted—she also scoured the Internet for stories of kindness and took some of her friends’ tales from Facebook.

“I thought it’d be easier to find stories—I’m not getting people telling me as many stories as I wanted, which is weird because I’ve been actively asking for them,” McGrory says.

However, the ones that she does receive have packed a huge punch.

“There were a couple people crying the other night,” McGrory says of the opening reception. 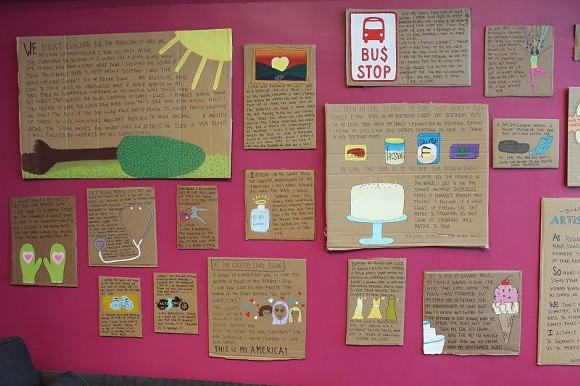 One tear jerker details a woman’s kind-hearted neighbor, Mike, helping clean up the aftermath of Hurricane Matthew, then passing away from a heart attack just a month later.

Some are simple and just a few sentences long: “Someone left a 5-pound note in a book for us to buy a ‘cuppa’ tea. We bought sandwiches for a homeless couple.”

However, some of the acts she’s received totally miss the mark.

Even the acts of simple politeness are included in the collection. When making the signs, McGrory only stayed away from the stories that were inherently political.

“I clearly have political leanings, but I thought it wouldn’t have as much impact if it was political,” she says.

Whether they’re stories of kindness or politeness, McGrory hopes the acts inspire the viewers to perform their own good deeds and take credit for them.

“A lot of us have been taught that we’re not supposed to brag about the good things we do, but maybe we have to start doing that. Maybe if people start doing these things just so they can brag about it?” McGrory wonders.

The persistence of McDonald's