The critically acclaimed tribute band, also known as Rumours - A Fleetwood Mac Tribute, has garnered a reputation for being pretty much the next best thing to Stevie Nicks and company.

They cover a lot of musical ground in their show, but they naturally focus on the Nicks/Lindsey Buckingham years — the band’s most commercially successful.

Rumours ATL’s first ever Savannah performance is set for Fri., Nov. 22 at Victory North, and we chatted with the band’s Mekenzie Jackson — their own Stevie Nicks — who ahead of the show to chat about the legacy of the band, the set list, and why the Bob Welch years matter. 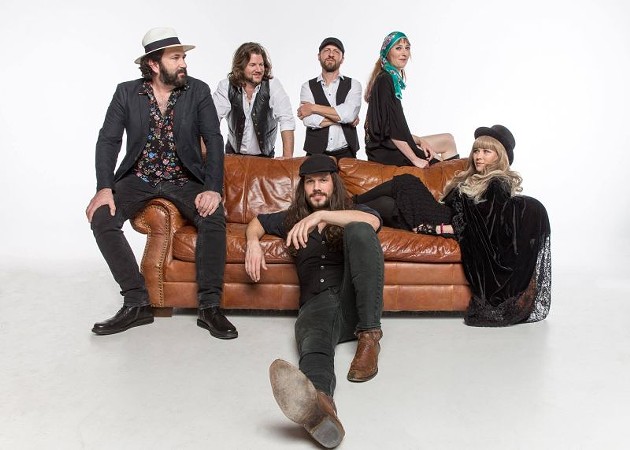 Fleetwood Mac is truly the band that keeps on going. I count myself as a legitimate fan, who owns the records and has followed them for years. How did y’all end up starting this project? Are you lifelong fans?

I think that I may be the only one who is! Everybody else either became fans when they were a little older, like when The Dance came out, or they've kind of become fans through playing the songs. And hearing them every night—not just hearing them, but knowing them.

It’s kind of like immersion therapy, where you’re around something so much that you end up doing it. I’ve watched people in the band have Fleetwood Mac grow on them because they’re around it so much.

I started listening to Fleetwood Mac when I was about five, and really got into them when I was 10—which is when The Dance came out. I’d heard it on the radio when I was younger, and when I got a little bit older my mom bought The Dance. My parents would play it in the car in the mornings.

My same story! My mom would play it on car rides when I was seven or eight.

It always kind of reminds me of driving to school. I went to a private school in fourth or fifth grade, and that’s when it came out. It came out in the fall, and so every time I think of dreary weather, that’s what I think of.

It’s a little easier to get into them in the fall or winter. It’s a bit strange to play Fleetwood Mac in the summer on the beach [laughs]. You’re singing about white witches and stuff!

But it’s cool—being able to do Fleetwood Mac is a town like Savannah is great because it’s a really artsy community. We’re really excited about coming down and playing.

The younger generations really seem to be gravitating towards them, especially over the last few years. And Stevie seems to be becoming more of a cultural icon as time goes by.

Yeah, that American Horror Story thing kind of gave her a resurgence for sure. I'd never heard "Seven Wonders" before, but when that came out and they did "Seven Wonders," I was like, "Oh my god! What is this song?" Now, especially when there's a younger crowd, there's always some girl [requesting it]. It's so interesting to see!

Meme culture has really embraced them as well.

It's hilarious! You'd never imagine people who are five, six, seven years younger than you listening to Fleetwood Mac. It's so funny how that works.

When it comes to picking songs, I imagine you play all the hits. But do you take from all eras of the band as well?

When we started this band, we had no idea that there were tribute bands. We didn't know that you could make money doing this, so we kind of put our set together almost based on their greatest hits album and then started adding stuff from there.

We’d learned all of Rumours as well, because some venues asked us to do it front to back—which is really hard to do!

But yes, we do “Dreams” and “Go Your Own Way” and all of those songs. For 2020, we’re going to start incorporating more Peter Green and Bob Welch-era songs. I think it’s necessary to kind of flirt with that. The more we play out, the more people come up and say, “You guys really should try to do Peter Green.”

We hear that a lot. The one that’s really heartwarming to hear, though, is “Hey, you guys should do some Bob Welch.”

“Hypnotized” would be amazing.

Oh, yeah! We were listening to the Bob Welch stuff and were like, “Oh my god, this guy is incredible.” His voice and his guitar playing, it really is amazing. And then you read his story, and it’s so heartbreaking.

We really should honor his music, because he was a huge part of Fleetwood Mac.

Victory North looks ahead to the future with ‘Nights’ event