It's early afternoon on a Friday, and Troy Allen is itching for the school bell to ring.

“I have so much to do this weekend,” says the Savannah Arts Academy junior, ticking off tasks on one hand.

“I have to order some more leather pieces, I have a shift at the restaurant and I still need to finish a few pieces for the pop-up shop.”

Like most 18-year-olds, Allen is driven by the generational catalysts FOMO (“fear of missing out”) and YOLO (“you only live once”). But instead of bingeing on Red Bulls or clubbing ‘til dawn, he channels that energy into his ambitions: When he’s not in class or manning the host station at SOHO Café, the burgeoning fashion designer spends every spare minute working on his new clothing collection, gracing the runway Thursday, May 1 during Savannah Fashion Week.

Allen is the youngest in a distinguished line-up that includes the established brands of April Johnston, Brooke Atwood, Mamie Ruth’s Emily Bargeron, Cate Lyon, Faith Thornberg and other professional designers for SFW’s fifth year and its first official local showcase. In addition to contributing five different looks for the catwalk in Forsyth Park, he’ll contribute garments in various sizes for the racks of the event’s pop-up shop on May 2.

If that weren’t recognition enough of his style skills, the young sartorialist is also the first scholarship recipient of the Savannah Style Fund, SFW’s newly created charity arm.

“We always partner with a charity for Fashion Week, and we wanted to create a way to inspire and encourage students to pursue careers in the creative arts,” explains Heather Burge, SFW president and owner of BleuBelle boutique. “Proceeds from the runway show will go towards scholarships and supporting the fashion program at Savannah Arts.”

After seeing his dramatic designs this year’s Junk 2 Funk show at the arts high school, Burge and the rest of the scholarship committee awarded Allen $1,500 towards college tuition (as well as another $500 award to model Sophie Lichtman.) Burge was already familiar with Allen’s wild knitwear collection from last year’s Savannah Independent Designers showcase and saw great potential in his growing body of work.

“He truly did personify everything we were looking for,” says Burge. “We wanted to see his look on the runway.”

“I’m inspired by sportswear, even though I don’t like to play sports,” he laughs. “I’m all about accessibility. I want people to be able to go from the grocery store to Chive Sea Bar in my clothes.”

Raised in Savannah “by a very fashionable mom,” Allen first experimented with needles and thread making his own costumes at SAA. (To almost everyone’s confusion and surprise, he’s actually a dance major.) While his knit pieces wowed audiences at the Savannah Independent Designers show last year, it wasn’t until he met Johnston that he really learned to sew.

“Mostly I tore apart garments to copy them, and with Junk 2 Funk, we’re really just repurposing materials with duct tape and glue,” he shrugs.

“April is the one who showed me about pattern-making and helped me understand the foundations.”

He still counts her as a mentor, though the former Project Runway contestant now runs her Mangled Courtesan line from Pennsylvania. (Johnston returns to Savannah for Fashion Week with the promise of mixing up red and white looks into her signature black.)

Allen has also found instruction in designer and stylist Brooke Atwood, who readily shares her business acumen and occasionally her studio space with its industrial machinery and surplus materials. He used Atwood’s favorite purveyor for the oversized white lambskin jacket for SFW, calling it his “most challenging project ever.”

“Sewing leather is such a huge task,” he moans with self-deprecating theatrics.

But it’s not technical details that he seeks from his vestiary guides: “Spending time with Brooke has helped me get my own point of view on fashion. She’s also taught me to look like a big business even if it’s just you.”

Allen has also learned that it’s never too early to cultivate that professional demeanor: His designs have already caught the eye of influencers in New York, and he’s been able to line up several internship opportunities in Brooklyn and Manhattan. That means he’ll finish up his senior year of high school online while navigating the beginning stages of his big city career.

His family and teachers wholly support the leap.

“Troy is a real piece of work,” offers SAA principal Gif Lockley with obvious affection. “He’s got charisma, and he can combine creativity with technique. He’ll be fine.”

College figures somewhere in the plan, and Allen has set his sights on NYC’s Parsons School of Design, where he plans to study not just craft but marketing and management. As soon as Fashion Week is over, he’ll begin a new collection, funded by his earnings at his restaurant job.

It’s a hectic dance, but Allen is determined to maneuver it with grace. As the kids say, you only live once.

“I have this intense fear of running out of time,” he grins, pushing a fringe of hair out of his eyes. “There’s just so much I want to do.” 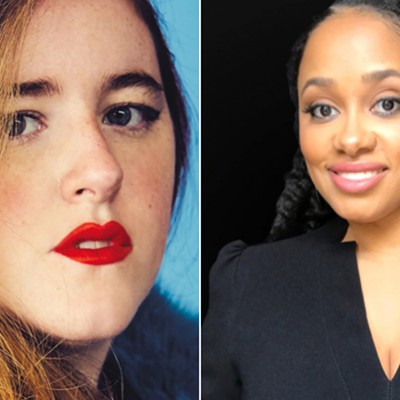