Same As It Ever Was, Birdlips 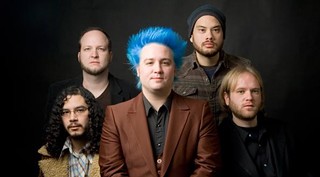 Heads up: Same As it Ever Was, Live Wire Music Hall, June 3

SAME AS IT EVER WAS

This is a part-time project for Curtis and Grant Geren, Knoxville-based musician brothers who have an original music band, Shortwave Society, on which they focus most of their energy. Same As It Ever Was is - you guessed it! - a tribute to Talking Heads (that's right, the moniker comes from the classic Heads tune "Once in a Lifetime").

The band, which has developed a considerable following in southern college towns, hits the road for perhaps one weekend a month. "That's a way to keep it fresh," says Curtis, who plays keyboards and percussion, and handles the David Byne-like lead vocals. "We're not one of these tribute bands that goes out for 30 or 60 days and just beats it into the ground.

The tuneage will be familiar and welcomed - everything from "Psycho Killer" to "I Zimbra" to "Life During Wartime" to "Burning Down the House."

"We pay homage to the music, but at the same time do it in our own way and keep it fun," explains Geren, a trained jazz musician. "He have some improvised sections that weren't there on the recordings - but we try to do it in the same spirit as the Talking Heads' live recordings. Because they made changes to their own tunes when they did them live."

Heads heads can expect material from all phases of the Rhode Island band's career, from the psychotic early, punky stuff to the poly-rhythmic, African-inspired funk and quirky electronica of the middle-era material, to the straight-ahead pop and left-turn lyrical rock of the final years.

"What originally caught me was this universe that David Byrne painted lyrically, and how funny and tongue-in-cheek it was," Geren says. "I heard him describe it as how an alien race would come to earth and view humanity. And while thinking our behavior is completely silly, loving us completely.

"The thing I liked about it was how intelligent the music was, and how it was pop "and dance-able at the same time. Pop music doesn't have to be just drivel that means nothing - it can be dancy and smart at the same time, and people can have a great time listening to it.

"That's why I think they're so important, and they've affected so many bands, and American musical history as a whole." See myspace.com/sameasiteverwasmusic

With Dare Dukes and the Blackstock Collection, General Oglethorpe & the Panhandlers

Fans of quirky pop music can get their weekly fix-in-one at this special Thursday night gig, at which two of Savannah's finest and funkiest quasi-acoustic popsters are joined by Birdlips, a "psychedelic folk" duo from the Washington, D.C. area. Clifford John and Lindsay Pitts play an assortment of oddly-combined instruments, sing incredibly tight harmonies, and create the sort of hazy, gauzy songs that might result from a union of She & Him and Mazzy Star.

There's a touch of the South American on these birds' lips as well. Favorite quote, from Yours Truly: "It's what bossa nova would sound like if it originated in Laurel Canyon rather than Rio. With its hint of Brazilian day-dreaming and spicy dashes of funk and psychedelia, it sounds like The Girl From Ipanema taking a beach walk in the moonlight, on the prowl for something exciting." See birdlipsmusic.com