“Culture, Currency and Continuity: The Significance of Cowrie Shells in African Art,” will officially open to the public on February 2 at the nonprofit museum, 201 East 37th St.

“Our exhibits rotate out and start up every February with the launch of Black History Month,” said Billie Stulz, Executive Director and Chief Curator of the SAAM.

SAAM reserves a gallery for annual rotating exhibits that allow for a more in-depth display of a specific aspect of African history and culture. The rotating exhibits are curated by Stultz along with a SAAM intern choosing a curatorial track for the semester. SCAD student Tiva Baloi was the intern who assisted with this exhibit.

“This last exhibit was ROOTS: Hair-Culture-History, Exploring the Hair & Cultures of West & Central Africa, where we focused on the importance of hair in African culture. This new exhibit is focusing on cowrie shells because they are connected to many things in African art and culture,” said Stultz.

The new exhibit corresponds with SAAM’s participation in the 2022 Savannah Black Heritage Festival, which runs from February 1-20, 2022. As part of the festivities, SAAM is presenting a workshop that ties into the new exhibit, “Creating Wearable Art” on Feb. 12 from 11 a.m.-12:30 p.m. on the second floor of the museum’s Upbeat Village Terracotta Gallery.

“Cowrie shells have come to represent the African continent globally. They have taken root in pop culture, coming a long way since the startled looks and comments received by Venus and Serena Williams when they adorned their braided hair with them as a connection to their African roots during tennis competitions in the early days of their careers,” said SAAM Education Coordinator Lisa Jackson.

Though cowrie shells are not indigenous to Africa, they are mostly associated with African culture.

The shiny, small shells were more than just stylish, they had economic value in Ancient African societies. For centuries, the beige shells were a representation of wealth and were used as a form of currency due to their sturdy and lightweight character.

Apart from their economic value, the shells were also distinguished for their power to bring prosperity, fertility, healing, and spiritual connection to ancestors.

“These shells were completely intertwined with the culture spiritually, emotionally, and financially. They were an important part of African life. We want our visitors to walk away with more knowledge about these popular shells than what they walked in with and share it with others,” said Jackson.

In addition to learning about the history of the shells participants in the workshop will have the opportunity to create wearable art out of cowrie shells and other materials. Also on Feb. 12, participants can have their photographs taken for posting and downloading on the SAAM website. Each photo will have a border placed around it displaying the SAAM and SBHF logos and the date, making them great keepsakes of the SBHF and SAAM Experience.

“I hope this exhibit brings an interest and a curiosity for people to start doing their own research into the shells and have this be a jumping off point to start the conversation about different forms of material that have a strong importance in Africa,” said Stultz.

For more information about the new exhibit, visitsavannahafricanartmuseum.org.

For more information about the workshop, visit savannahafricanart.org/workshops. 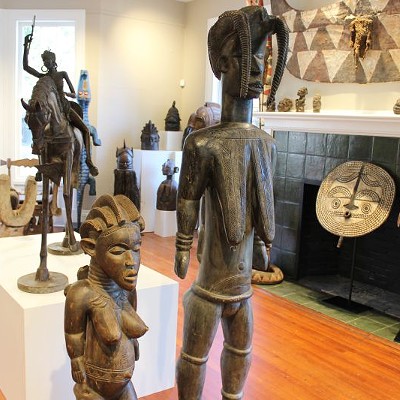