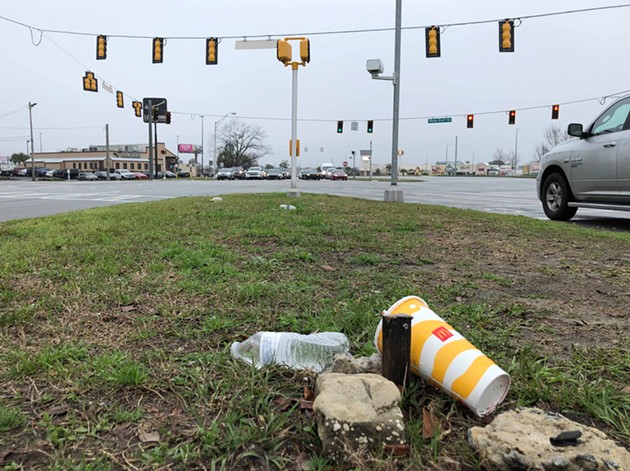 Nick Robertson/Connect Savannah
Litter was cited as a major reason for Savannah's City Council to ban pedestrians from roadway medians.
Savannah’s City Council adopted an ordinance on Feb. 12 prohibiting pedestrians from obstructing the flow of traffic by soliciting from vehicles while standing in roadway medians. The traffic-ordinance amendment bans pedestrians from standing in city-owned medians; soliciting business, money, or employment from the occupant of any vehicle; and from impeding traffic in any other way in city right-of-ways for motor vehicles. The ordinance also bans citizens from sitting, lying, or sleeping on any public street or highway, except when temporarily physically disabled. Alderman Nick Palumbo said the ordinance will improve safety at the city’s median crossings. “We’ve received reports of a number of pedestrian-related fatalities and accidents,” Palumbo said. The council said they had been working on the amendment for quite some time. “I am glad,” Alderwoman Estella Shabazz said. “It’s been a long time coming.” Council members stated that the ordinance will keep citizens safe, but Alderwoman Alicia Blakely mentioned that effort must be made to inform citizens of the new rules. “It is imperative that we give this information to the citizens,” said Blakely. “A lot of times things happen in our city government and the constituents don’t even know about it.” According to Alderwoman Kesha Gibson-Carter, the ordinance does more than keep citizens safe. “Less than the fatalities and less than the traffic accidents that have occurred as a result of our medians being populated, I am pleased to announce to the many citizens that have reached out to me who are concerned with the amount of litter at the corridors of Victory Drive and Abercorn, Victory Drive and Truman, of Abercorn and DeRenne,” said Gibson-Carter. “This ordinance will also help us to keep our streets clean and free of litter.” Gibson-Carter also announced that the city will launch a campaign encouraging Savannah citizens to keep public roadways clean.