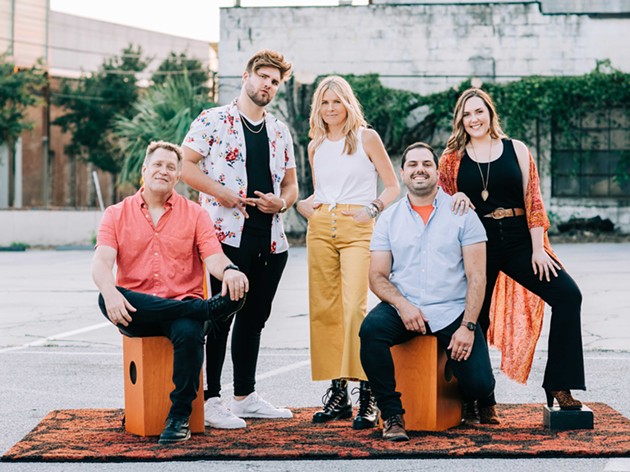 Courtesy of Tell Scarlet
The (family) members of Tell Scarlet, from left: Jeff Davis, Will Davis, Mary Davis, Cory Shuman, and Julia Shuman.
The title track of Accelerate – the new EP of three original songs released by Savannah-based pop group Tell Scarlet in late November – seems born of these wearying times, yet captures the yearning that so many now feel to build momentum toward greater things to come. Beginning with a spare piano solo and the lyrics, “Let it go, waking up from a dream state,” the song gathers speed with a rising tempo and modern reverb effects that reveal Tell Scarlet’s growing studio-production savvy. “Accelerate” goes on to encourage listeners to pursue their goals with a genre-bending rap segment stating “you were made for more, a higher dream, a higher name, a higher score.” Similar upbeat messages of persevering through hard times to discover personal potential also permeate the other two tracks on Accelerate, “I Know She’s Out There (I.K.S.O.T.)” and “Something Good.” But according to the members of Tell Scarlet – who also happen to be family members – their new EP’s spirit of overcoming melancholy to seize the future was merely a continuation of providential events that has allowed the group to flourish for almost a decade now, after starting out with humble intentions as a cover band in 2012. “The songwriting really kind of happened along the way,” says Tell Scarlet vocalist and guitarist Mary Davis, the wife of bassist Jeff Davis; their kids Julia and Will take turns on lead vocals, while Julia’s husband Cory Shuman plays drums and produces to round out an accomplished group of musicians whose talent truly runs in the family. “We really consider ourselves more of an artist now.” Along with their growing creative sophistication, Tell Scarlet is enjoying increasingly prominent exposure with regular gigs at high-profile venues. This weekend they play two Savannah-area shows on two consecutive nights, headlining the Plant Riverside District’s Riverside Pavilion Tent on Friday, Feb. 26 , followed by a show at Pooler’s Wild Wing Cafe on Saturday, Feb. 27. Both concerts will feature performances of their Accelerate songs, as well as some tracks from their previous EP, Clean Slate, and a few of their favorite covers. Accelerate definitely feels more introspective than the more rock-tinged Clean Slate, but its hopeful messages came through with a shared desire for “welcoming the future and being open to anything,” according to Julia Shuman. Work on Accelerate started in earnest in 2018, and while it took some time to get the EP up to speed, it was an organic process of blending influences. “Everyone in the band was so good at saying, ‘You know what, this is going to come out when it’s supposed to come out,” Julia said.
click to enlarge 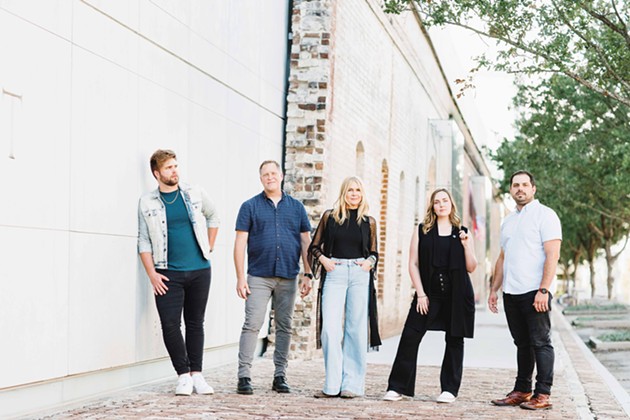 Courtesy of Tell Scarlet
The (family) members of Tell Scarlet, from left: Will Davis, Jeff Davis, Mary Davis, Julia Shuman, and Cory Shuman.
During the songwriting process, “the world went nuts,” Mary said – yet this seemed to only intensify their willingness to share intimate thoughts of inspiration with their fans. In “Something Good,” Mary performs lead vocals to share her past dreams of sailing the world, while addressing the fallout from her time as a “party girl,” something many moms wouldn’t feel comfortable sharing with their kids at home, let alone singing about with them onstage. However, this openness yields refreshingly honest music that resonates with listeners because of the relatable emotions expressed. “We do work really well together, and we enjoy playing together,” Mary says. “We feel very grateful that we get to do what we do, and we don’t take it for granted.” Of course, the tensions inherent to being bandmates and family members can sometimes spill over, but with a sense of unity, the members of Tell Scarlet always come around to support each other. “It’s interesting having the dynamic of a family in the band,” Will says. “It is harder, sometimes, because we all want what’s best for Tell Scarlet.” From Julia’s perspective, the music of Tell Scarlet and the family’s close relationships are inextricable. “We’re family first, and the music, it comes naturally,” Julia said. “The pieces fell into place.” As for the future, while Will is considering branching out with some solo efforts someday, Tell Scarlet is happy to continue performing together as opportunities to play festivals and larger events are expected to materialize in the upcoming months. For Mary, the chance to be living out a modern-day version of The Partridge Family – a series she loved in her youth – is already a dream come true, minus one element that would really get their show on the road. “I would love to have a psychedelic bus,” Mary says with a laugh. Tell Scarlet plays the Plant Riverside District (400 W. River St., Savannah) at 7 p.m. on Feb. 26 and Wild Wing Cafe (417 Pooler Pkwy., Pooler) at 9 p.m. on Feb. 27. Visit tellscarlet.com to hear tracks from Accelerate and for more information on the band.