Duo brings ‘The Last Negroes at Harvard’ to Savannah

Kent Garrett and Jeanne Ellsworth at the Savannah Book Festival

Festival Saturday is free and open to the public with books available for purchase in Telfair Square. For more information, visit savannahbookfestival.org.

BEFORE affirmative action, there was Kent Garrett’s class at Harvard University. He was one of 18 black men admitted to Harvard’s freshman class in 1959, the largest amount ever at that time.

Years later, Garrett, who had worked as a news producer for years, had the idea to get in touch with his classmates and create a documentary project. He pitched the idea to Jeanne Ellsworth on their first date, and the partnership worked out—in both ways.

That project ended up taking the form of a book, “The Last Negroes at Harvard: The Class of 1963 and the 18 Young Men Who Changed Harvard Forever,” published by Houghton Mifflin Harcourt. The book tells the story of Garrett and his history-making classmates, and Ellsworth lent her background in the history of U.S. education to assist in the story.

Based in Roxbury, New York, Garrett and Ellsworth will appear at the Savannah Book Festival this Saturday. We caught up with them last week. 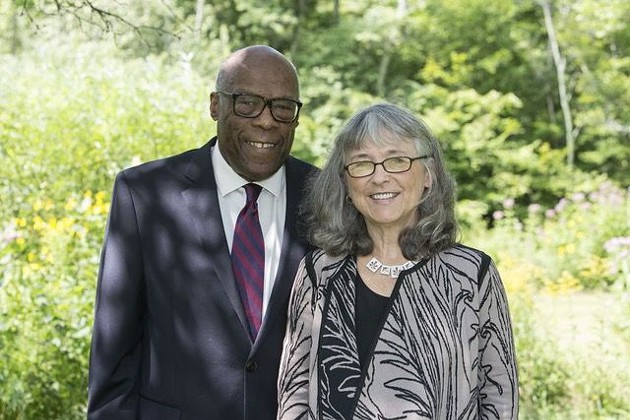 How did you begin to tell this story?

Garrett: It started out about eight years ago as a video project. I had just finished about ten years of farming and trying to figure out what to do next. I’d pretty much finished a career in TV news producing; I worked at CBS News for ten years and then NBC Nightly News for ten years. Then I got out and did farming in upstate New York.

Garrett: So when you graduate from Harvard, they send every domestic graduate a Harvard magazine, and as you get older, everyone just runs to look at the obituary when you get it to see which people in your class are still around. I got mine and saw a black friend of mine who had been a couple classes ahead of us had died. I got to thinking about what had happened to the members of my class.

There were 18 of us, the largest number of blacks ever admitted to Harvard at that time. I was thinking about who had done what, who had been happy, who had been sad, where they were, and I thought it might make for a good documentary project.

Jeanne and I got a grant from the Mass Humanities Foundation, and they gave us enough money to travel and do a trailer that we’d later use to raise a larger amount of money to do a documentary.

The guys were in about ten different cities or so—one in St. Thomas and one in Austria—and the idea was to see what they had to say, which guys were still articulate and what they had turned out to be and how Harvard had affected them. We ended up producing a 23 minute trailer sampler and with that, we were going to raise money to make a longer documentary, but we ended up deciding it would make good sense as a book. We went on to some other projects, but came back to it and took a year to do a proposal and find an agent, then took another year to write the book, and here we are.

What was it like to be in that inaugural class?

Garrett: Of the 18, we were from all different aspects of the black Negro society. Some of us were poor, some of us were middle class, some were from the black aristocracy—a whole mix of people. My experience was that I had gone to public schools in New York City and for me, it was really an eye-opening experienced. As we say in the book, it was like landing on the moon, to deal with the different cultural aspects and the fact that I had not been around whites that much. I grew up in Brooklyn in the housing projects and had never been around whites that much except some kids and teachers at school.

Did you experience any racism while you were there?

Garrett: It was a different kind of racism. At that time, the North was very different than the South and the racism was much more subtle and not as overt. So we felt that we were kind of considered curiosities. You kept getting the question, “What’s it like to be a Negro?” You get tired of it pretty fast. There were people there who had never talked to a black before, never been around blacks at all, but the racism wasn’t that overt—there was no picketing or that sort of thing.

Through research, did you find any evidence that Harvard was making a conscious choice to diversify admissions?

Ellsworth: Right from the very early point in the book I was wondering, could this have been an attempt by Harvard to do just that? There was no affirmative action at that time; that phrase wouldn’t be used for quite some years yet. But interestingly enough, we realized the boys thought something was up. They talked about it at the time and had theories about what Harvard was trying to do.

In 2006, Jerome Karabel wrote a book [“The Chosen: The Hidden History of Admission and Exclusion at Harvard, Yale, and Princeton”] which we read not too long thereafter, and he found documents that suggested, yes, Harvard was reaching out. It was not everybody by any means, but two of the main movers and shakers in admissions made a conscious decision.

As we talked to the guys more, some of them remembered being specifically recruited by various people. There was also an organization called the National Scholarship Fund for Negro Students, set up in the early 1950s that provided scholarships and scholarship counseling and looked around for boys they thought might do well, not just at Harvard but predominantly white colleges. If they needed an extra year to prepare for that, they would send them off to a prep school, and several of the guys in Kent’s class were recruited by those guys. It was basically Harvard’s first step into affirmative action.

We got to talk to one of the two men who’s most responsible for this; he was still alive when we started, and he told us a lot of things, but basically he said that the feeling was among some of the people at Harvard was it was the right thing to do. Others weren’t so sure.

Garrett: I think diversity has always been an issue at Harvard and many colleges. Before we came in ’59, Harvard had been admitting two or three Negroes a year, especially if you had the money to pay for yourself. The two or three people that got into each class would just do their studies and keep their head down and graduate and leave Cambridge. Whereas with 18, that was a large enough number that we could have an individual racial identity as well as a group identity. In that freshman class, we were the first to set up the black table—a lot of times we’d all eat together. In our junior/senior year we set up the first black student organization. We were the last class to not have a black faculty or black studies.

This seems like a very timely read. Would you agree?

Ellsworth: When I’d ask Kent, “What do you think this book says to young people?” one of the things he says is, “Things come full circle.” So many issues that we deal with in the book are not yet resolved, really. So we keep spiraling back to these questions about who we are as a country and who gets access to what resources, especially places like Harvard.