TENA CLARK never set out to be an author.

The songwriter and CEO/CCO of her own company, DMI Music & Media Solutions, Clark came of age in a tiny Mississippi town in the 1960s.

Her family ascribed to the typical Southern royalty archetype: wealthy beauty queen marries one of the richest men in the state and lives on a sprawling farm.

However, amidst alcohol abuse and infidelity problems, Clark’s parents separated, leaving her and her three sisters in the care of Virgie, her black nanny.

Clark learned about unconditional love from Virgie, especially as she came to realize she was attracted to women, a taboo in the South at that time.

“Southern Discomfort” is Clark’s story of strength, love, and acceptance in the Civil Rights-era South.

We spoke with Clark last week.

What was your impetus for finally telling your story?

I wrote about a hundred pages [of a draft] a long time ago, and I showed it to her and I asked her what she thought. She said, “I want you to do this. I think it’d be cathartic for you. Just wait until I’ve passed.”

My mom had been passed away for 16 years, my dad for 20, so obviously I waited a long time. I never thought much about it until my oldest sister passed away about three years ago. I started seeing history repeat itself in the South, and in Mississippi, and I felt like I was tired of, when I’d go home, pretending things were a way that they weren’t.

Even though my family was close, and as dysfunctional as it was, I couldn’t pretend anymore. I thought I needed to tell my story. I had not longed to write a book, I had never intended to. It just seemed like the right time and right place. Hopefully through me telling my story of so many factors of coming of age during that era would help someone.

What’s crazy, though, is since I’ve written this book, I would say 80 percent of the people who come up to me or email my publisher or messages me through Facebook have all these similar stories. There are twists and turns in different ways. 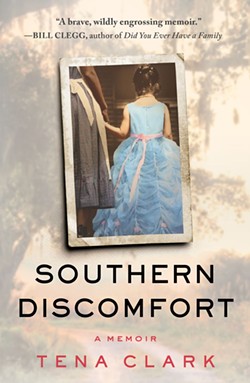 It’s funny, because Sela Ward—the actress from Mississippi, we grew up close to each other and we’ve been friends for a while—when I told her how I think there’s some people in my family in that town that are not happy about the book, she said, “Baby, women from the South don’t like their petticoats pulled up.” [laughs]

Tell me more about your relationship with Virgie.

Virgie probably didn’t even know what the word “gay” was. I think she always knew that I was, as my mom would say, “special.” We never discussed everything, but she taught me unconditional love and I would say simplicity, coming from a wealthy family and learning very quickly that money does not buy happiness, safety, or security. Watching her life and her being my buoy in the storm so many times, she taught me unconditional love. And I think when she did find out [I was a lesbian], of course later on, she would never have blinked. It was a non-starter.

I just cannot imagine what would have happened to me if I had not had Virgie. None of us are born with discrimination or hate. We are taught that, or we emulate that, or see that, or are around that. For whatever reason, thank God that I did not connect with that [hatred]. The only thing I knew was that black people were people that I loved. They were sweet and kind and took care of me, and there was no pretense. What I saw there, it was so foreign to me. What shaped me was trying to figure out and never wavering that why everybody around me had the visceral reactions to and treatment of these people. Why was that there? Why was I a bad person for not feeling the same way they all do?

What do you hope people take from reading “Southern Discomfort?”

If there was one thing I would want someone to walk away with, it would be the courage to live your truth, whatever that truth may be. Not only do I feel, but I know, if you don’t live your truth, it will live it for you. Whether that’s through illness or addiction, whatever it may be, you will not be fulfilled, nor will you ever find that true joy that I think God expects us all to have. People settle for something they’re not. That’s one thing about me—I never settle. I was never confused. I marched for what I believed.