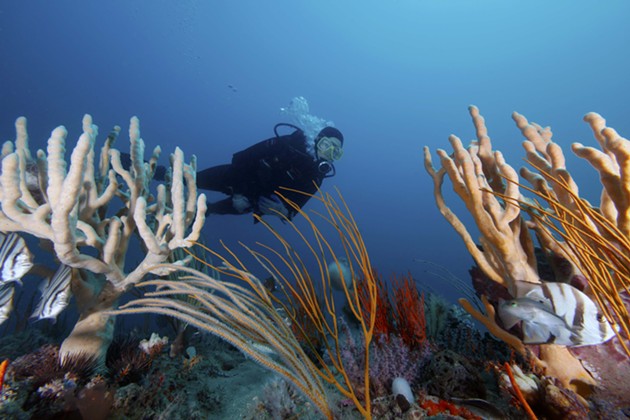 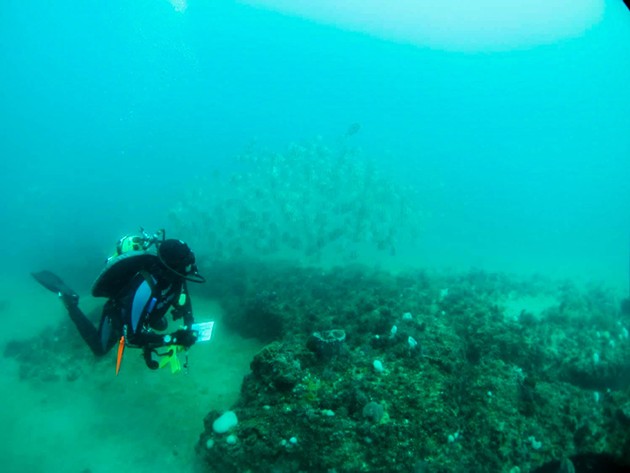 Courtesy of Gray’s Reef National Marine Sanctuary
A diver examines fish and sponges at Gray’s Reef National Marine Sanctuary.
Gray’s Reef National Marine Sanctuary is the only natural protected reef off the coast of Georgia, and it is one of the largest near-shore “live bottom” reefs of the southeastern U.S. It is one of only 14 protected marine areas that make up the National Marine Sanctuary System. The approximately 22-square-mile sanctuary of Gray's Reef is just a small part of the U.S. territorial Atlantic Ocean, yet its value as a natural marine habitat is recognized nationally and internationally. “Gray’s Reef is 19 miles off the coast. It requires a boat and/or the ability to scuba dive to actually see the reef, so we do a lot to interpret that to bring that to the people so that they can experience it virtually even if they can’t go out to the sanctuary,” said Rogers. Since most people will never get to visit the reef in person, staffers have been working to bring the experience of its bountiful maritime life on land. Rogers says that some prospective plans include the incorporation of free educational classes taught by National Oceanic and Atmospheric Administration scientists, as well as volunteer opportunities and public Advisory Council meetings to engage the community. The visitor center experience may include digital multimedia galleries equipped with touch-tables and virtual-reality headsets that simulate an actual reef visit. The site will feature appropriate materials for the education and enjoyment of all ages. Rogers anticipates opening the center by fall of 2021. In November 2020, former President Carter wrote a special letter to the director of the Office of National Marine Sanctuaries, John Armor, honoring the reef’s 40th anniversary. In the letter, he also acknowledged the other three marine sanctuaries that he designated on that day: Channel Islands, Looe Key, and Point Reyes - Farallon Islands. “What we want is to engage more people and get more people involved by letting them know how they can be involved and support the sanctuary,” Rogers said. “Everyone holds value in Georgia’s coast and all of the great resources it provides. Whether they visit the coast or not, everyone benefits from it and its resources.” Gray’s Reef staffers are enthused about engaging the community in future endeavors. “We are super-excited, because most people will never go to Gray's Reef, so it’s our job to bring the wonders of Gray’s Reef to them on land,” said Michelle Riley, the sanctuary’s communications and public outreach coordinator. “After all, the sanctuary belongs to all Americans!” Visit graysreef.noaa.gov to learn more about the Gray’s Reef National Marine Sanctuary.