Be a guest of Savannah Children’s Theatre at a spectacular spring show. From May 12 to June 3, a cast of talented youth and adults will capture the timeless magic of Beauty and the Beast live onstage.

With sumptuous costumes, dazzling sets, and memorable musical numbers, it’s sure to be an unforgettable experience for the whole family.

Katie James, rising senior at Savannah Arts Academy, takes on the lead role as Belle. James has been performing at the Savannah Children’s Theatre since she was six years old. Most recently, she starred in Bonnie and Clyde as Blanche, Clyde’s sister-in-law. 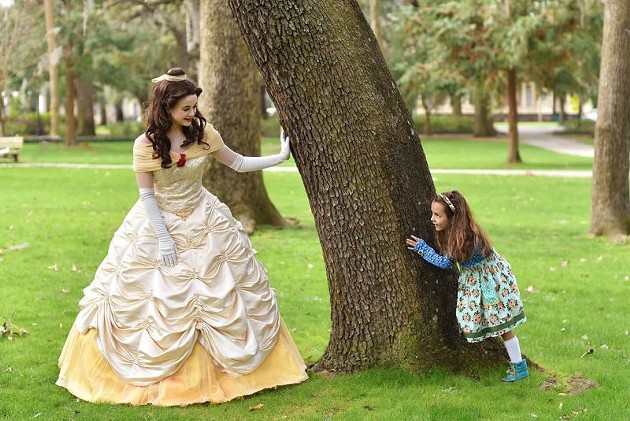 Shannon Zaller
The magic of Disney comes to life at Savannah Children's Theatre.

“Actually, the first show I saw at the theatre was Beauty and the Beast,” she recalls. “So this is a very full circle thing!”

Acting was a natural choice for the vivacious teen.

“I was always a very fun and dramatic type of kid,” she says. “I tried acting when I was little and fell in love with it and haven’t stopped since.”

Becoming Belle has been a dream for James, who finds the character very relatable.

“I’ve always liked reading and I enjoy her story—how she craves adventure and goes out and finds it,” she says.

Shannon Zaller
Katie James, a Children's Theatre actress since she was small, stars as Belle.

The cast includes a handful of familiar faces from the Savannah Children’s Theatre scene as well as adults and SCAD students. James’s own father is playing Cogsworth, the loveable clock.

“He started out in theatre with me awhile back,” James explains. “We’ve done a lot of mainstages together, and it’s always so much fun.”

As a Chorus student at Savannah Arts Academy, James will bring her vocal abilities to the stage and explore Belle’s musical side. The production features two songs that are not included in the classic Disney feature film.

“[The songs] come at really pivotal moments,” James explains. “There’s one when she first arrives at the castle and another when she goes back to save her father. It talks about how much she’s been changed, and it really shows her growth in these two amazing numbers.”

After years onstage, James likes to fully embody a character’s little quirks and tics, immersing herself in the character completely.

“Once I get started in a show, I try to become the character and leave Katie behind,” she explains. “It doesn’t really hit me that I have to focus on singing and acting; it comes out naturally as it does for the character.”

Though she’s deeply inspired by the Belle audiences know and love from Disney’s film, James brings refreshing originality to the role.

“I did consider Belle in the film and how she originally was,” she shares. “But I also like to take my own spin on her, make her more natural, and try to relate to her. It’s kind of my own version of Belle.”

James looks forward to taking the stage with her cast mates and donning that iconic yellow ball gown at the Savannah Children’s Theatre.

“Be ready to laugh, smile and enjoy this beautiful tale as old as time,” she says.

Speaking of Beauty And The Beast , Savannah Children's

Beauty & The Beast, in dance