ON paper, The Diary of a Teenage Girl is the racy stuff of indie film festival dreams: a 15-year-old girl, Minnie, has an affair with her mother’s 35-year-old boyfriend. We’re promised plenty of nudity, lots of drug use, and lots of sex. The line to get into the theatre was, expectedly, out the door and down the block. 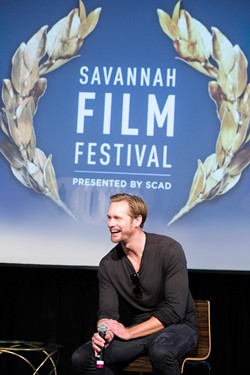 Image courtesy of SCAD.
Alexander Skarsgård in discussion after a screening of “The Diary of a Teenage Girl” at SCAD Museum of Art

While it seems like a prime opportunity to revel in two of Hollywood’s favorite things—adolescent sexuality and affairs (read: instances of statutory rape) between minors and adults—Diary is not the romanticized, Nabokovian, American Beauty type. The sex is ugly, uncomfortable. Instead of a love story or a rape story, it’s a surprisingly fresh look at a sexual awakening and independence.

Minnie is in charge of her narrative and records all her experiences in a cassette diary. She’s also an incredibly talented cartoonist (the book the film’s based on is a graphic novel). Bel Powley is absolutely compelling in the role, boasting the perfect blend of surliness, excitement, jadedness and obsession—like if My So-Called Life’s Angela Chase was written for HBO. Alexander Skarsgård is perfect in his role of slobbish man-child Monroe. He’s infuriating and challenging; Minnie wants to have sex—not necessarily with Monroe, though she’s got a crush and he’s been vastly inappropriate toward her in subtle ways (after throwing his arm around her whiling watching TV, hand just resting on her chest, Minnie ponders, “Even if he meant to touch my tit, it’s alright, because he knows how these things go and I don’t”). When Minnie directly asks Monroe to sleep with her, Monroe goes along with it more than pushes it; the lines are cringingly blurred, and Skarsgård brings an incredible, painful complexity to the role.

Kristin Wiig, Minnie’s mother Charlotte, is fantastic as an almost-always drinking, chain-smoking ‘70s single mom with a penchant for beginning sentences with, “Not to sound anti-feminist...” The den in which she’s often lazing about is a gorgeous setting rich in browns, oranges, and reds; Minnie’s room, down the hall, is a haven from it all, obsessively covered in cutouts and Iggy Pop posters and draped in twinkle lights.

Knowing what we knew of the film, my friend and I took guesses on what we’d see. We placed our bets on three to four exposed rears, one to no instances of underage female nudity, perhaps one slightly obscured view of male genitalia, one instance of marijuana use, and an obscured view of cocaine use.

Man, were we off: in the final tally, I noted seven instances of marijuana use, six of cocaine, five butts, five scenes with bare-chested women, one acid incident, references to Quaaludes, references to heroin, and an uncountable amount of drawn genitalia and drugs (Minnie’s cartoons are incorporated into the story through animation).

Several attendees hustled out of the theatre as it continued to escalate.

The real surprise is how none of it felt gratuitous. As we left the theatre, I heard many women lamenting that a film that didn’t vilify youthful sexuality or objectify its lead didn’t exist when they were teens.

One noted that hearing Minnie’s story may have allowed her to find control in her relationships and do things for herself rather than for the men with whom she formed those relationships.

In the end, there aren’t really heroes and villains, predators and prey here. Diary shows that sex isn’t always pretty, but it doesn’t have always be tragic, either; it shows that the most devastating (even on paper) moments in your life don’t have to define you. It’s not a love story; in Minnie’s hands, it’s a chronicle of female agency and a young woman discovering her own power, and, in turn, freedom. – Anna Chandler