A few highlights of this year's expanded event

THE SAVANNAH Food and Wine Festival, happening through this weekend, is outdoing itself with an extravagant series of events sure to please foodies of all types. It features not only the brightest local culinary lights, but an amazing array of visiting chefs from all over the country.

It’s so big an event that writing about every single event would in fact take up more space than we have. But here are a few tidbits to get your tastebuds tantalized.

Self-described “gourmet cowboy chef” Lenny McNab, who recently won “The Next Food Network Star” competition, will bring his big personality and even bigger talent to town.

McNab, whose new Food Network series will debut next spring, will give festival participants a taste of his “creative cowboy cuisine” at several events during the Savannah Food and Wine Festival.

On Thursday, November 13 at 7 p.m., McNab will partner with Raymond Winery at Rocks on the River at the Bohemian Hotel for the Festival’s nightly Savannah’s Connoisseur Wine Dinners.

McNab will participate in the Taste of Savannah on Saturday, November 15 on the Jet Blue Chefs & Sommeliers Stage with a cooking demo.

The handcrafted 80-proof Charleston-based spirit is part of a tasty line created by Chef David Szlam.

‘Le Grand Cochon’ is a heritage hog roasting and barbecue on the riverfront at the Westin Savannah Harbor, following the Grand Reserve Tasting on Thursday, November 13, at 8 pm.

Savannah’s own Chris Nason of Sapphire Grill and Wiley McCrary of Wiley’s Championship BBQ will be creating some local big pig favorites.

• And.... Savannah Art Association will have en Plein Air artists painting the scene throughout the Taste of Savannah.

Savannah Food and Wine Festival has a lot on the menu 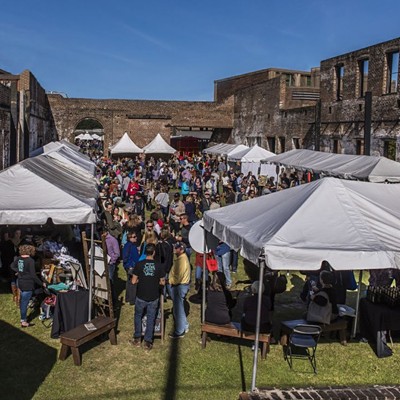