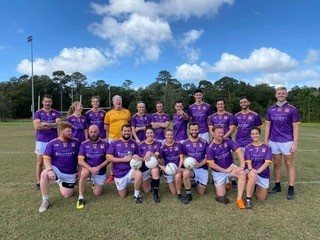 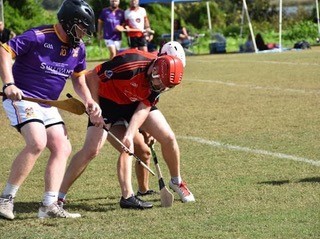 Players' heads are in the game.
Savannah’s ties to Ireland run long and deep, highlighted annually by the massive parade and related events that consume the city for St. Patrick’s Day. However, the appreciation for all things Gaelic took on another form during the Savannah Irish Fest just before the pandemic hit the country last year. A group of eight people enjoying Irish music began talking about Irish culture, and specifically sports. A few days later, the Savannah Gaelic Athletic Association sprang to life. Not surprisingly, the octet has grown to more than 30 men and women ranging in age from 13 to 50 who practice and play two of the five “native” Gaelic sports: football and hurling. And after a little more than a year of playing, the co-ed group plans to head to the home of them all: Ireland. The group plans to fly to Dublin June 4, 2022, then travel to Wexford, a coastal city on the country’s southeastern coast — and Savannah’s sister city. The 10-day trip will see the group not only tour parts of that area and Dublin, but also spend some time competing against local teams, providing Savannah’s team a chance to prove its mettle. “I’m very confident,” said Caleb Harkleroad, Savannah GAA chairman. “I will be very confident in putting our footballers against just about anybody. They play well with each other. They can read what each other is going to do. They’ve learned each other’s playing style.” Harkleroad’s confidence is inspiring, especially since the group has played fewer than a dozen matches against clubs from North Carolina, South Carolina and Florida, losing just one time. “I’m always impressed with how well we fare for how little time we’ve been doing it,” he added. “I’d say 95% of our players had never picked up a Gaelic football or a hurley before. So, I’m confident in their ability to even beat our native-born friends.” In addition to training with and playing against Wexford and other local clubs, the group will tour several cities, a castle, a brewery and even potentially head over to Georgia Southern University’s remote campus in Wexford. The trip will wrap up back in Dublin with additional training, a tour of the Irish Parliament given by GSU alumni as well as taking in a match at Croke Park, the GAA flagship stadium and its headquarters. Traveling to Ireland isn’t cheap, the cost is $2,000 per person, which doesn’t include the airfare. To that end, the Savannah GAA is looking for sponsors to help defray the costs of the journey. So far, they’ve secured a few small ones, but they’re looking for some help from local companies that could see the trip as a way to also strengthen links to Savannah’s sister city. Additionally, the club is also trying to raise funds by selling the broken hurleys from matches already played, autographing them and getting local bars to put them on display, said Tara Reese, the group’s public relations guru. A 50/50 raffle is also in the works. The teams are co-ed, but the action is still rough and tumble. Harkleroad suggested the toughest player on Savannah’s team may be a former ballerina, who put that on display by going for a high ball during a match, coming down bloodied and battered. Yet, she still made it on time for the team’s post-match celebration. Gaelic football isn’t soccer nor is it what Americans would consider football; it’s really a rugby hybrid. The most notable difference is the round ball used in Gaelic football and the oblong ball for rugby. Hurling is most closely aligned with lacrosse, although the rules are different and the sticks — called a hurley in hurling — used to advance the ball are dramatically different. The Savannah GAA doesn’t participate in the other original sports: camogie, handball and rounders. For those interested in joining the Savannah GAA, which is as much a social organization as it is an athletic association, the annual dues are $95. They practice twice a week at Benedictine Military School and meet regularly at O’Connell’s Irish Pub to enjoy all forms of Irish culture. Visit the group’s website at savannahgaa.com or email them at savannahgaa@gmail.com for information on the team or to inquire about ways to sponsor their trip.