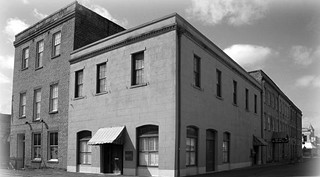 The building at 19 Barnard St. is an example of the city's surviving antebellum architecture. Photo courtesy of Cindy Wallace.

In a city whose history appears so well–preserved, it would be easy to assume that all the stories had been told, particularly of life in the Hostess City during the Civil War.

“It was suggested to us that there wasn’t much to find,” says Barry Sheehy, a local businessman–turned–historian. “The big, big shock was just how much there was to find.”

For nearly six years, Sheehy has been working with photographer Cindy Wallace, Vaughnette Goode–Walker, the Director of Cultural Diversity and Access with the Telfair, and a team of dozens of volunteers compiling research and writing what will become a four–volume history of Savannah spanning the period from 1850–1865. Their work is perhaps one of the most comprehensive and compelling assessments of any time in the city’s rich history.

The series is more than just a rehashing of warmed–over Civil War factoids, it is a social history of the city during one the most tumultuous times in its history – from the peak of its bustle and boom – when judges lived across the street from brothels and you could buy goods from around the world on Broughton Street – to the closing days of the war, when the city came “within a hair’s breath” of being burned to the ground, according to Sheehy.

The first volume of the series, Savannah: Immortal City, debuted in February, and the second installment, Brokers, Bankers and Bay Lane, which delves into the business of slavery in Savannah, will be available later this spring.

“As we got into the material, it became clear there was too much for one book,” says Sheehy, who explains that the original plan was to write a single tome over the course of a year or so. The second book began as a chapter, but the group uncovered so much new information that they soon expanded their scope. “It became a book.,” he says. “You can’t have a 200 page chapter within a 500 page book.”

Although Sheehy, Goode–Walker and Wallace have their names on the cover, the extensive research was an effort of nearly 60 volunteers from across the spectrum of academia, including indexers, archeologists, historians, cartographers and others. Many donated their time because the series will be a non–profit project whose proceeds benefit local preservation efforts.

At a reception last week, the group was able to present a check for $5,000 to the Historic Savannah Foundation, what Sheehy describes as “the first of many,” if book sales continue to be strong across the series.

While the antebellum buildings in the Historic District are protected, many of the battlefields and other sites in the surrounding area are not.

“Many of the sites that we have photographed are gone now,” says Sheehy. “The buildings are protected, but other sites, including sites in Savannah, are not protected and we’re losing them.”

It was a shared interest in preservation that introduced Sheehy and Goode–Walker. He was making a presentation to the Chatham County Preservation Commission; she heads the Commission.

Sheehy has spent the better part of a decade researching Civil War sites near his home in Effingham County, including writing extensively about Monteith and helping to secure a marker for a site near Savannah Christian.

“We started by documenting the sites that were outside Savannah that were threatened,” Sheehy says. “Those sites are directly tied to the defense of Savannah.”

That research kept drawing back toward the city itself, a seemingly separate history that became increasingly tangled up with his work in the surrounding area.

There are numerous sites within the city as well that are unrecognized. There were several Confederate hospitals in the city that remain largely undocumented, and there is almost no recognition of the surviving historical sites and structures that once had ties to slavery.

“There are dozens of sites in the city with ties to slavery – slave marts, the offices of brokers, houses of brokers, sites of large sales. None of it is documented,” explains Sheehy. “The city has almost washed its hands of it.”

Goode–Walker offers walking tours that explore various facets of urban slavery in Savannah, and much of her research with Sheehy is being incorporated into those tours now.

One thing that surprises those who take the tour is how little recognition is given to something that was such a large part of city life for long.

“The County Courthouse on Wright Square is another example,” she adds, while discussing buildings that remain unmarked. “For 75 years you had slaves sold on the steps on the first Tuesday of every month. That’s the oldest slave site in the city. No marker.”

While they faced some opposition to their research into the local slavery business, Goode–Walker points out that their pursuit of historical truth was about understanding, not digging skeletons out of closets.

“People don’t want to talk about it because it might embarrass someone,” she says. “150 years later, it’s not about embarrassment, it’s about truth and knowing our past.”

Reminiscent of the oft–repeated line by George Santayana, “those who cannot remember the past are condemned to repeat it,” while the series focuses on life 150 years ago, there are implications for the present and the future – an idea Sheehy hopes to convey through the title, Immortal City.

“We have a chapter on who saved Savannah, and the number of times providence seemed to nudge the city, or people in it, to make the right choices,” says Sheehy, who traces a line from the end of the war to the Magnificent Seven (the women whose preservation efforts in the 1950s created the momentum for the Historic Savannah Foundation).

The city has survived “enormous adversity,” but every time it’s come to the brink of disaster, there has been a person (or persons) ready to do what needs to be done – whether that was preventing Union torches or real estate developers.

“There are no guarantees that will happen tomorrow unless we’re alert to the need,” says Sheehy. “It’s as much a reflection on the past as it is a hope for the future.”

Juneteenth at the Jepson: 12 years strong

‘Tis the season for Jubilee