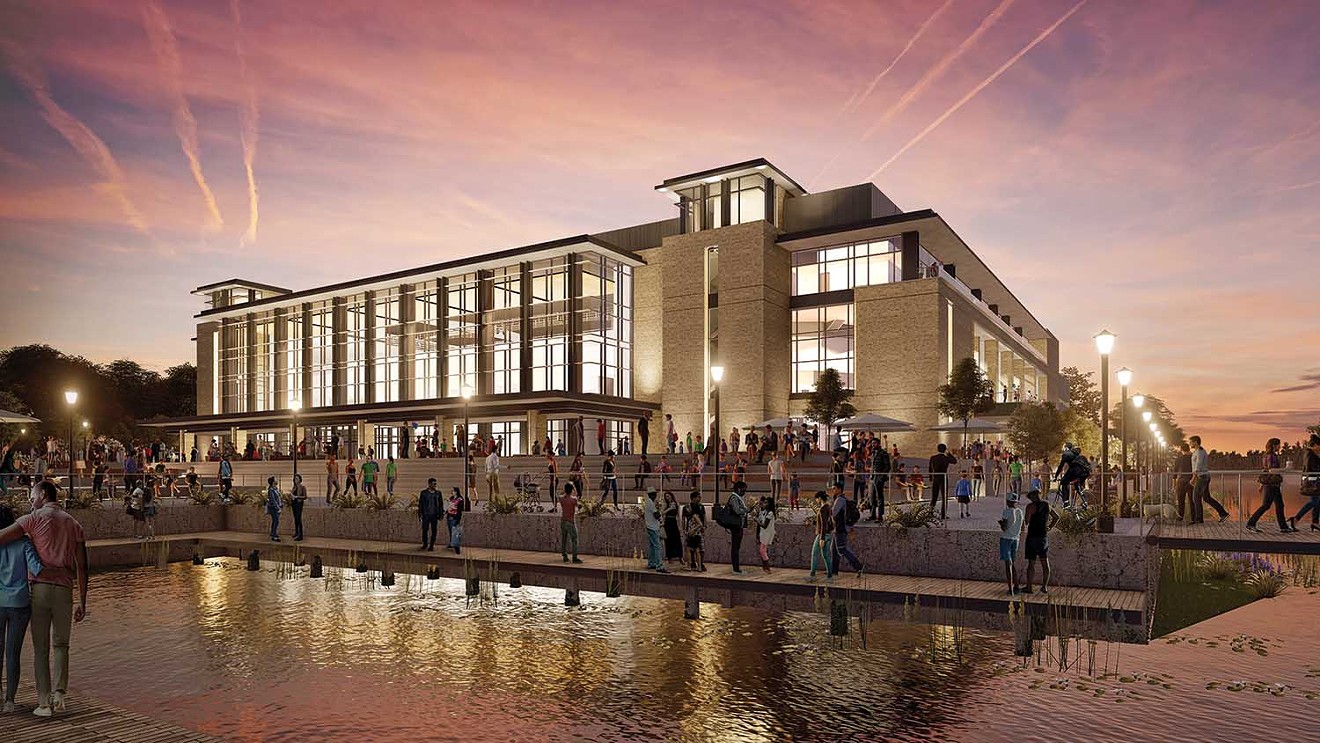 Image courtesy of Oak View Group
A rendering of the new Oak View Group-Savannah Arena shows details of the structure to be built in the Canal District.
Businesses in Savannah often aim to cater to tourists, but Monty Jones, operations manager for the Oak View Group, made a point to say, “We want Savannah to know this is their arena.” The Savannah Arena will be the perfect stopover spot for big names in entertainment, hosting concerts, comedy shows, family shows, sporting events and more, Jones said.

“This is biggest investment as a whole for the City of Savannah. We want to make a grand juncture for that, make it as just as big as what Savannahians put into this.”- Monty Jones, Operations Manager

The arena is set to open for Savannah’s entertainment purposes in the first part of 2022, Jones said, and it will be fully enclosed within the next month. The Savannah Arena will have a lot of premium spaces – about 17 suites, 700 club seats and loge boxes in the upper level. The arena will feature numerous grand opening events: first country concert, first pop concert, first R&B concert, the list goes on and on. “You’re going to get your pop, you’re going to get your hip-hop R&B, you’re going to get your country, you’re going to get your rock, your comedy – you’re going to get some of everything within the first of couple months,” Jones said “That’s the plan, to get a taste of everything.” The yet-to-be-named hockey team will be begin playing in the fall of 2022, Jones said. They will play approximately 40 games throughout their season, adding to the total 50 sporting events to be held in the arena and more than 150 projected annual events. The new arena will sit less than one mile from the Savannah Civic Center. The site presents the opportunity to redevelop the Canal District to the west of W. Boundary St., creating a vibrant new center of activity in Savannah’s core, according to the City. “The canal district is something that they’re trying to build up and having a big anchor like this down there will certainly help build that area up,” said Chip Wade, marketing director of Koger Center for the Arts in Columbia, South Carolina, who worked for the Carolina Colosseum – the old arena at the University of South Carolina. As Savannah is a destination for more than approximately 14.5 million annual visitors, the city is going to love to have more people come in just for the new and exciting things Savannah is going to do, as well, Jones said. The design assistance contract was awarded to Oak View Group Facilities and Live Nation for the new arena in spring of 2019. The Oak View Group has several world-class arenas around the world, including the Moody Center in Austin, Texas; the soon-to-be Coachella Valley Arena in Southern California; and the Santa Giulia Area in Milan, Italy where the 2026 Winter Olympics will take place. As part of the agreement, Oak View Group Facilities and Live Nation provided pre-opening consulting on both design and development of the new arena. The two companies work closely with the city and the construction team on providing recommendations on the impact of architectural design and the selection and procurement of furniture, fixtures and equipment. “Live Nation is the biggest concert promoter in the world, so the fact that they’re tied into that will be good for Savannah because that means they can get some really good quality traveling tours,” Wade said. The awarding also included a future lease for the new arena where OVG Facilities and Live Nation could provide management and operations. “We’re fortunate that they will be guiding us through the pre-opening and design phases of our new arena in Savannah,” said Rob Hernandez, previous city manager, City of Savannah, on the savannahga.gov website. “With an experienced team, extensive resources, contacts and knowledge of our industry Oak View Group Facilities and Live Nation will provide tremendous insight to our team which ultimately will bring great pride to our region.” The two anchor tenants of the arena will be music and sports, according to Jones, but additionally, the terraces will be an optimal spot for company parties. “What we’re looking to do with this arena is provide a new way to do business here in Savannah,” Jones said, noting he’s experienced some frustration handling business on the golf course. “You know they say everybody says business is done on the golf course. We want them to be able to say ‘My business is done at the Savannah arena.’” Wade said the arena really will be an economic boost to the community, not only through the tourism it will bring in, but the business locals will feed into it, too. “A lot of people when they think of Savannah, they think of a place that you travel for vacation or as a destination city, but there are a lot of people that live in Savannah and in the outside areas,” Wade said. “So, I feel like while you may have people that come there for concerts, from as far away as Columbia. The truth is, I feel like this arena is being designed and built to accommodate the people of Savannah. “I see that as a good thing because there are a lot of people in Savannah that want to go to concerts without having to drive to Florida or Charleston or wherever. I feel like this will definitely help add to the nightlife and the entertainment options for locals as well as bringing people in from out of town.” “I’m really excited about getting this open and just seeing the excitement from the local people of what this is and what this will truly mean,” Jones said. “The biggest joy for us, like for me is when you get to a show and you just look out over and you just see everybody just having a great time. That’s always been a huge plus for me is seeing people have a good time at a show. There’s some happiness brought to someone. That’s a huge joy that I get when I see the smiles on their faces and people just having a good time.”