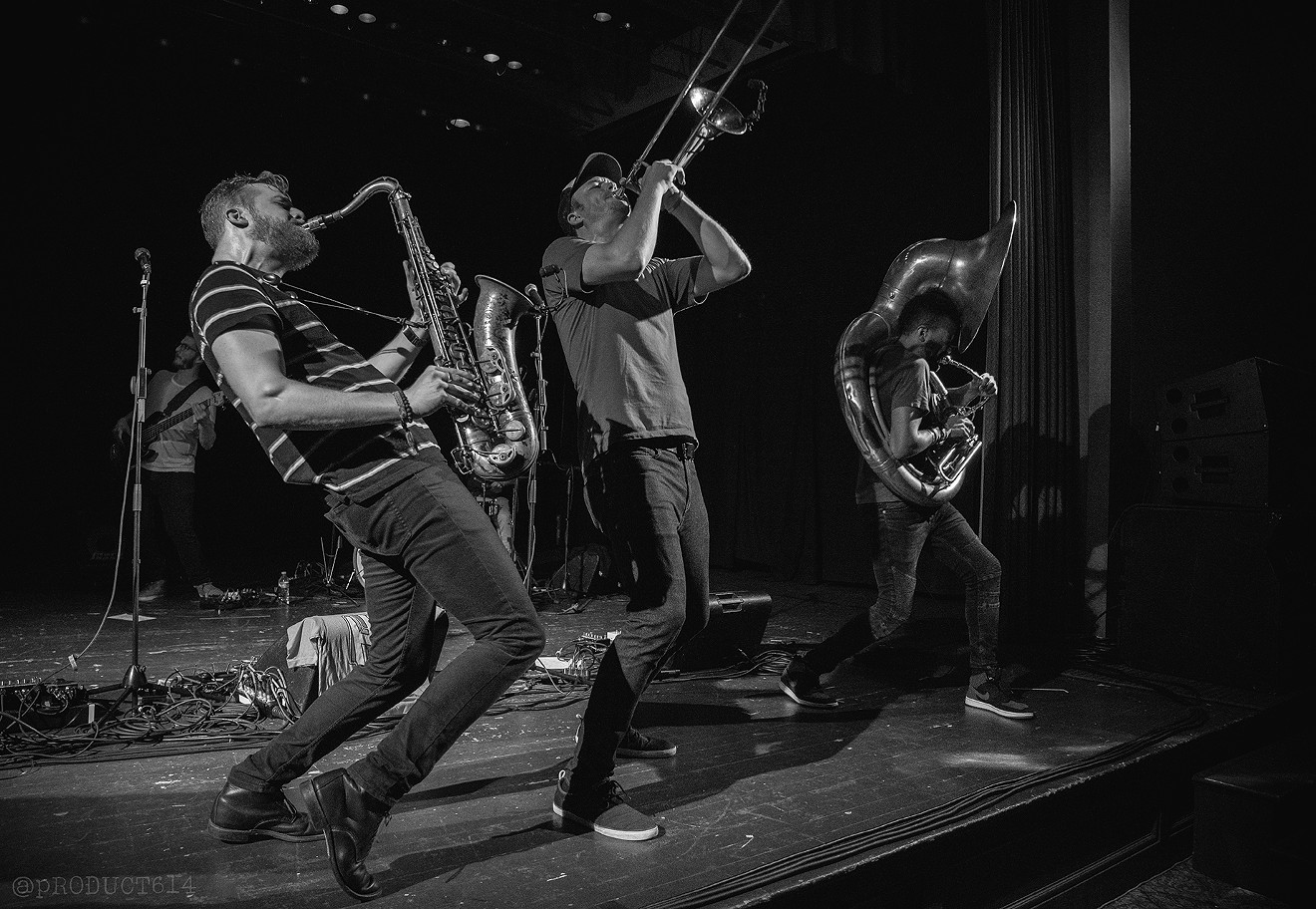 The musicians that make up Huntertones don’t think music needs lyrics or vocals to be able to connect with people. That was the theory the bandmates set out to prove in 2012, when they formed their instrumental band.

“That’s one of the unique things about the band, the vocal quality of the band is kind of the three frontmen, the three horn players. That’s what makes it something unique because the sound produced collectively is the unique identity, and the chemistry on stage,” said composer and band leader, Dan White.

The bandmates — Dan White (saxophone), Jon Lampley (trumpet/sousaphone), Chirs Ott (trombone/beatbox), Joshua Hill (guitar), Adam DeAscentis (bass), John Hubbell (drum set) — all met back in college while attending Ohio State, where they discovered a shared interest in music. It all happened organically, as they attended classes together and quickly realized they all shared a similar sort of musical like-mindedness.

During this time, they composed together, performed together, and eventually would form a band together, naming it after the street that started it all, called Hunter Avenue, off of campus where they started out playing house shows.

“That’s part of the identity of the band, we started playing music for our friends, sort of the social atmosphere, also, we weren’t old enough to drink at that point. So we couldn’t even get into bars. And so we started writing music, and that’s really been the engine for the band,” said White.

After college, they moved to New York, toured over 20 countries worldwide, and continue to tour within the US and outside of the US. During which, they have been and continue to transcend language barriers across the world and cultivate new music based on their experiences.

“The last album that we did called Passport, is directly inspired, and programmatically about our travels and about playing music outside of the US and experiencing art and music and collaborations with those that are different from us,” said White.

For the bandmates, the key to a successful lyric-less performance is simple. They are always improvising and playing music that is in the moment, cultivating unique experiences for each audience.

“I think if there’s one thing that we want audiences to walk away from our performance, it’s feeling some joy, feeling a little bit better than they did before they heard that music because I think that’s one of the things that I think music can do, with or without lyrics and especially live, it can touch people in a lot of different ways,” said White.

“We’re going to be playing a lot of music from Time to Play, the newest album. This is something that is brand new, then we’re also going to be playing some brand new originals that we have not played in the US yet,” said White.  “So we’re looking forward to getting on stage and I mean, we love Savannah. We love this festival. So we’re very excited to get back, and to play all this new music for you.”

After Jazz Fest, Huntertones head off to a music festival just north of Atlanta. Followed by several collaborations, album recordings and tours abroad.