FROM RIVER STREET to the Southside, Savannah booms with music and rooms to play in. For those growing up here, churches, coffee shops, restaurants and eventually bars are the necessary stepping-stones for getting onto stages beyond the Hostess City.

Truly, Savannah’s young musicians are lucky to have these performance spaces and opportunities, often, under the guidance of seasoned, well-respected mentors.

The 37th annual Savannah Jazz Festival kicks off with some of the city’s finest, and youngest, musicians.

On Sunday, September 23, the Mansion on Forsyth Park hosts an afternoon of jazz that begins with performances from the students of Savannah Country Day School and Savannah Arts Academy. 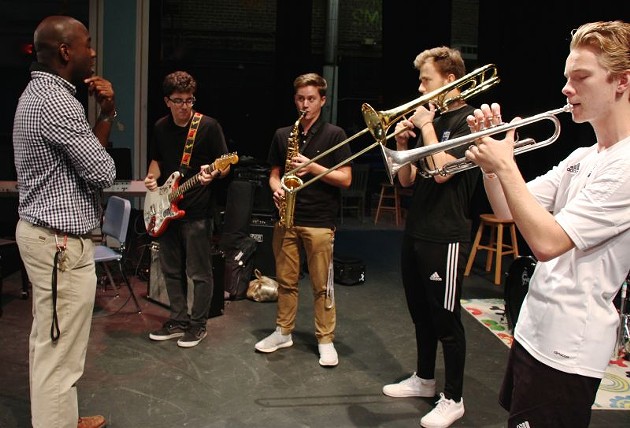 Dave Elliott, music director at Savannah Country Day, knows he has something special with his students.

“This year we’re trying something a little different,” explains Elliott, “Two ensembles will perform. We have a traditional 22-piece big band, and we have a smaller ensemble we’re calling the Flaming Vibes.”

The Flaming Vibes consists of seven players—bass, drums, vibraphone, piano, two guitars and vocalist. They do jazz classics like Lullaby of Birdland, but they’ve also been writing their own jazz-pop composition “In The Dark.”

Sophomore Sarah Palmer, who aspires to be a professional singer, brought “some lyrics and a chord progression to the group,” Palmer says, “and we worked with Mr. Elliott to make it into a verse and chorus and instrument solos.”

At the front of the rehearsal room, Elliott counts them in, and the students launch into “In The Dark.” The tune starts on a vamp reminiscent of the iconic “Stand By Me” bass riff. And then Palmer dives in with her vocals.

The tune moves, its intensity a mix of Adele’s soulfulness and Florence and the Machine’s buoyancy. The instrument solos are precise—in and out—not too many notes. 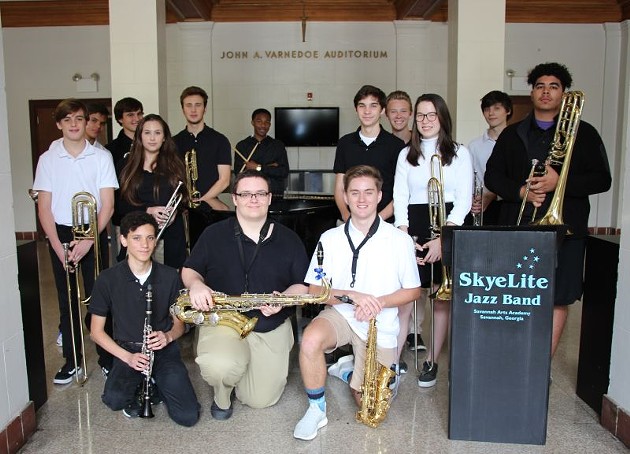 “With this I wanted to give the students an experience of being a session player, or working in a studio to write and record a song,” explains Elliott, “we collaborate and understand each instrument has its place.”

Dave Elliott has been teaching jazz and rock bands at Savannah Country Day since 2001. A music major from Northwestern University with 36 years of teaching, he’s the kind of mentor students need in their formative years—the kind of mentor who sees the valuable connection between music education and academics.

“Studies have been around for years about how playing an instrument or learning one makes you smarter, but I think it’s something more specific than that,” continues Elliott, “learning and playing music teaches you how to focus on one thing for a long period of time. In a 50-minute symphony all a musician can think about is that piece of music. If you can learn the power of deep focus, that ability translates to many aspects of learning and living.”

At Savannah Arts Academy, Michael Nestor heads up the music department where he’s taught jazz, concert band and percussion ensembles for the past five years. Nestor, the son of a military family, decided to stay in Savannah after his father retired from the Army at Fort Stewart. He went to Armstrong State initially to study bassoon but soon found he liked the tone and versatility of the baritone sax better.

“Jazz is a community thing,” says Nestor, “it’s an oral tradition, you learn to speak by first listening to it. By trying to speak like the greats, that’s how you find your own voice.”

To help his students find their voices, Nestor often asks local jazz players to sit in with his classes.

“I reach out to my friends and mentors like Teddy Adams, Randy Reese, Marc Chesanow, Eric Jones. These players come in as often as I can get them. Students can put faces with names and understand that jazz really is about community and conversation.”

This year the Skylite Jazz Band represents Savannah Arts Academy at The Savannah Jazz Festival. In rehearsal, Nestor goes over phrasing and asks students to focus on tone, dynamics, breath and exactly what they are trying to communicate with each other and to the audience.

The conversation must convey the fun of funk; the swing tunes should express more sass. “In rehearsal, we stretch our voices to say more clearly what we mean in the music,” explains Nestor.

Senior and first alto sax, Tristan Terry, has been playing saxophone since seventh grade. Though he doesn’t want to pursue a music career—he’s into computer engineering and sees his future at Georgia Tech—he chose to go to Savannah Arts Academy because he wanted to go to a high school with equally strong music and academic programs.

“Music gives you another way to understand sound and science and the relationships between them,” explains Terry.”

This is my second year playing Jazz Fest, and I like how attentive the audience is, lots of local pros who understand what you’re playing on a deeper level. But what I’m most looking forward to is improvising and my first year of being first sax. I feel like I finally have something to add to the conversation.”