IN THE early 1970s, Howard Paul was a young jazz guitarist with his eye on a coveted prize: a Benedetto archtop guitar. At the time, Paul could only dream of owning one of the finest instruments in the world, handcrafted by Robert Benedetto on his New York City workbench.

Now, after serving in the US Army and working as an executive for Chatham Steel, Paul blends his passion for music and sharp business acumen as President and CEO of Benedetto Guitars. 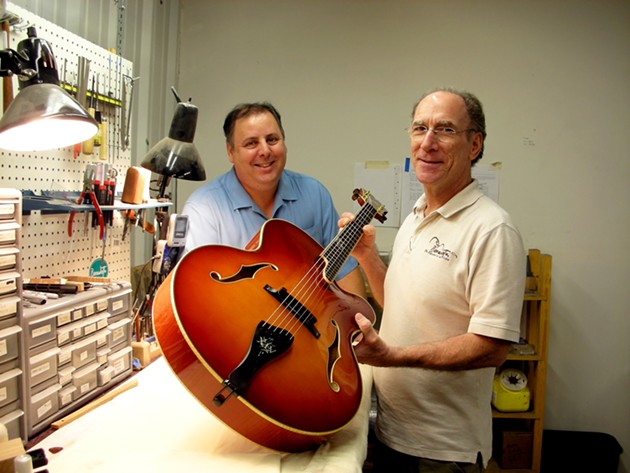 The very first Benedetto archtop was carved and assembled by Benedetto in 1968. By the 1970s, players like Bucky Pizzarelli, Chuck Wayne, Joe Diorio, and more were proud Benedetto players. The company moved production to East Stroudsburg, Pennsylvania in 1990, and not long after, Paul finally added his name to the waitlist for his custom-made dream guitar.

“At the time, it was a two-and-a-half to three-and-a-half-year wait,” Paul remembers. “During that time, I became very good friends with Bob and his wife Cindy.”

Benedetto, creator of “The Signature Jazz Guitar,” and Cindy, “First Lady of Jazz Guitar,” were in the process of moving to Tampa and regularly visited Paul and family in Savannah.

They became great friends, and in the late ‘90s, Paul was a Benedetto-endorsed guitarist. In 2006, Paul partnered with Benedetto and established a new, small manufacturing workshop in his home of Savannah.

“We were friends for ten years, over which period I was initially a friend and a customer and artist, and eventually in 2006, we became business partners,” Paul explains.

Benedetto’s Georgia headquarters continued to produce Benedetto’s legendary models, and Paul worked to expand the line to include more affordable guitars. In 2008, the recession hit while big box music stores like Guitar Center spread across the country and online retailers like Musician’s Friend rose to prominence.

Times were tough for small retailers, but despite the convenience of online shopping and chain stores, there’s no match for a handcrafted instrument made by a handful of the world’s finest luthiers.

“Today, we sell direct,” Paul says. “It’s all bespoke. We’re building custom orders. There’s no longer retail distribution, it’s all directly from us, and I think, today, we’re in a really good place.”

Benedetto celebrates 50 years of quality and craftsmanship with a unique Savannah Music Festival partnership. Festival attendees get the pleasure of seeing the instruments played by some of the finest guitarists in jazz today.

“One thing that makes this concert interesting is it features four generations of jazz guitarists,” Paul says.

“If you listed the top ten most influential jazz players, Pat Martino is among those top ten,” says Paul.

Active since 1959, Martino is prevalent in post-bop, fusion, soul jazz, and mainstream jazz. After an aneurysm left him with amnesia in 1980, the luminary was forced to relearn his craft, making his story one of the most remarkable in the modern jazz world.

Alden is a master of the seven-string guitar who’s spent 26 years as a Benedetto artist.

Lubambo brings a sound that fuses his Brazilian musical heritage with American jazz tradition; he’ll perform with Pinheiro, a leading figure of modern jazz in Brazil.

After the festival, Benedetto continues their big 50th anniversary celebration through collaborations with Perry Lane Hotel and The Kessler Collection. Locals can look forward to a big concert with noteworthy Benedetto artists at the annual Savannah Jazz Festival in September.

As Paul and company reflect on a half-century of quality instrument creation, Benedetto is proud to call Savannah home.

“We keep everything manufactured here in Savannah—a rarity in the guitar world,” Paul says. “Even though Bob Benedetto retired four years ago, the quality and integrity of the brand name is better than it’s ever been.”