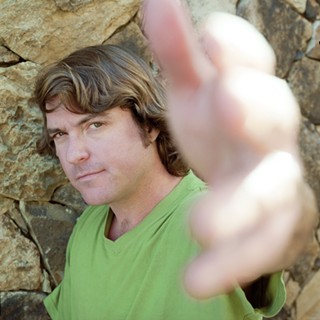 Known for his quirky turns of phrase, dazzling solo guitar work and the ability to change musical horses in midstream, Keller Williams returns to Savannah with an all-new project. His collaboration with the Travelin' McCourys, a (Del-less) offshoot of the Del McCoury Band, has taken on a life of its own in the last year.

This is bluegrass, Keller-style, which means the songs ("Sexual Harassment," "I Am Elvis," "Messed up Just Right") are a far cry from the McCourys' foundation blocks, set in traditional bluegrass stone. It also means that Williams himself is reigning in the electronic loops and guitar effects that are the hallmarks of his live shows.

"To me, the McCourys are complete royalty," says Williams, who's no stranger to bluegrass. "In my opinion, it's not too far of a step outside of their comfort zone when we play together. But it's slightly 'out there,' and it's possibly as exciting for them as it is for me to be a part of this vocal chord that we can create together."

The unlikely marriage began in the fall of 2011, with a joint performance at the Wannee Music Festival in Florida. Since then, Williams and the McCourys have played about a dozen shows together, making a fine album (Pick) along the way.

Meanwhile, the McCourys are the McCourys, and Williams still plays about 110 shows a year, as a solo singer/guitarist or with his other side project, Kdubalicious (he's the electric bassist in the reggae/dub/funk band).

"I personally don't want to get stuck in some rut, you know?" Williams explains. "Not only with me and my brain, but with the kind folks that come and see me in these towns that I play every year. I want to bring something different to the table each time. And if I don't, I want to make sure that I play completely different songs.

Just out, as a download, is an all-new Keller Williams album. Keys is a collection of Grateful Dead covers, played on piano. "Jerry ballads," Williams calls them.

"Piano," says Williams, "was my first instrument. When I was a little kid, running around the house crazy, the piano was kind of like a stop in the rounds that I would make. My mother would pull out the pots and pans and the wooden spoons, and that'd be another stop. Then I'd have a guitar, and I'd put down the guitar and pick up a hockey stick 'cause it was easier to hold. And it looked more like Ace Frehley's guitar.

"Since folks started buying tickets in the early 2000s, I've been able to bring more stuff. Starting six years ago or so, I brought a little keyboard along, and I would play one or two songs towards the end of the first set.

"I've been playing a lot of these songs live over the years; sometimes I'll play a nice theater that has a baby grand over in the corner, with stuff piled on top of it. I can talk the folks into letting me use that."

Keys is a fascinating excursion — Williams sings the tunes with a bluesy vibrato, and his jazz-inflected piano work gives a nod to Vince Guaraldi, and to George Winston (a Guaraldi devotee, Winston was a favorite of Keller's mother, who played his albums all day long in the family's Virginia home).

Even though Williams, in his extensive travels, has played with several former members of the Dead, some diehards haven't thrilled to the "very loose interpretations" (as he calls the songs on Keys).

"A lot of the Grateful Dead traditionalists aren't that psyched with it," he explains. "In the sense of the Grateful Dead improvising, and going that way, that's one thing. But there's a whole 'appreciation of how the song was done' that's definitely not there." See kellerwilliams.net