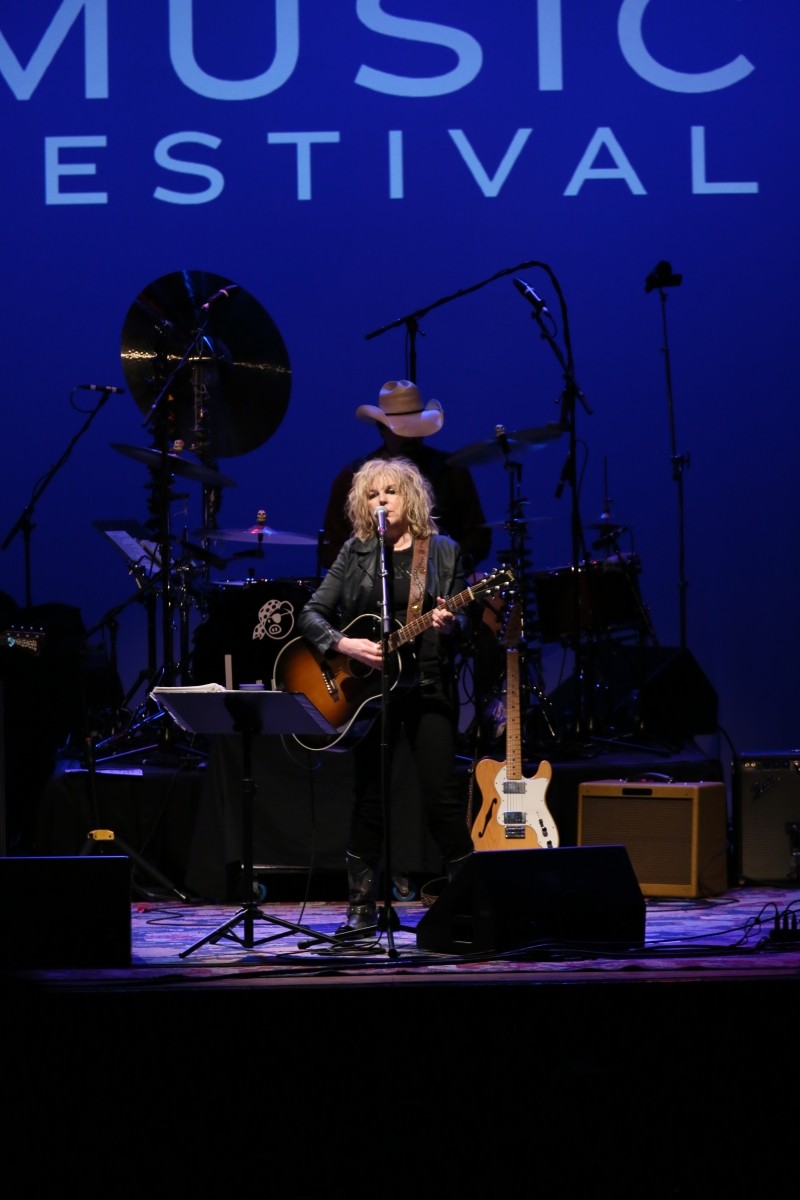 I'VE been talking about Lucinda Williams' show nonstop since Friday: to fellow attendees, to people who have never heard of the singer-songwriter, to everyone.

It was the kind of powerful set that isn’t easily explained in a quick exchange. Seeing Williams play was a peek into the mind and manner of one of America’s greatest writers, complicated and entirely riveting.

Williams kept the audience at arm’s length for much of the show, a near-drowsy swagger and nonchalance about her. She took to introducing songs with a simple off-hand introduction: “This song’s called ___.’”

Not that Williams needs to contextualize her songs, build them up, or hold anyone’s hand through them. Her songs are snapshots (sometimes sprawling ones) of the American South, the open road, the broken lives of people she’s known and lost.

They’re gorgeous, they’re high-res, they’re devastating, and they speak for themselves.

Does Williams enjoy performing live, or is it just a necessary part of the job? I kept wondering, watching her face for clues, as she performed.

She wasn’t trying to win her audience, wasn’t going on about how beautiful Savannah was, wasn’t gauging reactions or letting the crowd in her sight line.

In fact, she had a music stand with a binder of songs that she kept her eyes locked on much of the time. Was it out of necessity? Does she have difficulty remembering lyrics, or was it a comforting barrier between stage and crowd? Sometimes it made me think of karaoke.

Other times, I recalled someone telling me that poet Anne Sexton, riddled with anxiety, invited jazz musicians to perform with her while she read.

Williams moved with her rhythms, simple steps going side-to-side. She started out on her acoustic guitar, utilizing a thumb pick as she fingerpicked and pulling up-tempo, brassier notes by strumming higher up the neck.

At times, it sounded like Williams’ voice was on the verge of collapse, then she pushed through, feverishly, with astonishing resilience. Sometimes the high notes splintered and dissolve, as if she’d trailed off in the recesses of memory.

Thundrous applause followed favorites “Drunken Angel” and “Something About What Happens When We Talk.”

Hats off to Williams’ support: guitarist Stuart Mathis, who brought every ache of country twang out of his instrument, big-grinning and happy-footed bassist David Sutton, and drummer Butch Norton, who made use of a full kit and all kinds of accoutrements, including what appeared to be a glass rain stick. They left her alone a few songs in, and that’s when Williams stood the starkest.

Few can convey years of emotion in the arrangement of a handful of words the way Williams can. She can capture an entire family history in a still life, as she does in “Bus to Baton Rouge”: “The company couch covered in plastic/Little books about being saved/The dining room table nobody ate at/And the piano nobody played.”

“Look at the World,” off her latest, Down Where the Spirit Meets the Bone, was especially powerful live, evoking Nina Simone’s “I Got Life” with verses acting like a laundry list of struggles juxtaposed against an optimistic pep-talk of a chorus.

Williams told the crowd that she had long considered turning one of her poet father’s works into a song and had finally done it with “Compassion,” one of his best-loved poems. There was something about that lack of information—was it her most-loved? Did she have a particular bond with her father about this poem?—that was both upsetting and wonderfully distant.

The more I thought about it, the more I realized it wasn’t any of our business; this was how Williams had chosen to share her late father with strangers. Perhaps the best artists are the most tight-lipped between songs.

The band returned to finish the evening with a streak of honky-tonk house rockers like “Burning Bridges” and the sultry flirtations of “Hot Blood,” which Mathis dressed up with a little James Brown lick.

Williams took a look around the seated room and said, “I wish we were in a bar or something, so y’all could dance.”

For the double-entendre-laden “Honeybee,” some couples did. It would be nice to experience Williams in such a setting—one in which she has made clear that she would be more comfortable. It’s a place where attention is easily diverted by a drink order, a conversation, a dance, but there was something beautiful about seeing her in a place where none of that was an option.