OPENING NIGHT: THE THOUSAND AND ONE NIGHTS

PICNIC IN THE PARK

THE TRUMPET AND ORGAN SHALL SOUND

THE PRINCIPAL WINDS IN PARIS

FROM THE NEW WORLD

ALL YOU NEED IS LOVE

POST-IRMA environment permitting, the Savannah Philharmonic Orchestra and Chorus are scheduled to open their 2017-2018 season this weekend at the Lucas Theatre with an electrifying opener titled "The Thousand and One Nights."

The show opens with the overture to “The Bartered Bride” by Smetana, progressing to Mozart’s Piano Concerto No. 21 with guest soloist Margaret Singer. The evening concludes with Rimksy-Korsakov’s “Scheherazade.”

We spoke with Savannah Philharmonic Artistic Director and Conductor Peter Shannon about the opening night, and about some highlights from the rest of the season.

“Everyone knows Smetana from ‘The Moldau,’” Shannon says. “But whereas ‘The Moldau’ is more reflective, this is an effervescent, exciting, energetic opening.”

Shannon has worked with pianist Singer one time before, when the Savannah Philharmonic did a full staging of the Mozart opera ‘Cosi fan tutte.’

“I really enjoy working with her. We have this eye-to-eye communication,” says Shannon. “It’s a real thrill to work with a musician at that level when there’s a real sense of knowing what each other wants, and what the composer wants.”

The Rimsky-Korsakov showpiece is also going to be a showstopper, Shannon says.

“It’s a massive piece, very virtuosic. It’s an epic piece – the whole story is epic. About the adventures of Sinbad and the sailor, crashing waves, everything about it is gripping,” he says.

“Scheherazade” features a series of violin solos, serving as a central part of the narrative. 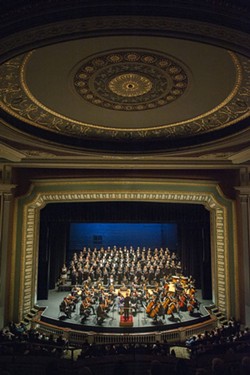 “This piece features concertmaster Sinisa Ciric,” says Shannon. “It’s so wonderful to see the motivation of the orchestra to support him. That helps my work as well, when one of the orchestral players is under particular pressure. Their colleagues get behind him or her more.”

“Scheherazade” of course tells the story of the Thousand and One Nights – sometimes called The Arabian Nights — of storytelling by the titular character, in order to save her life.

“There’s something about Russian and French composers using the whole palette of the orchestra,” Shannon says of Rimsky-Korsakov’s colorful arrangement.

“Germans do tend to be somewhat reserved, in the style of Brahms or Schubert. Their power is somewhere else. But French or Russian composers stylistically wear their heart on their sleeve. What we hear is what we get,” says Shannon.

“Rimsky-Korsakov of course has that element of daring and death-defying myusical stunts. He throws everything on the page and says, deal with it!” Shannon exclaims.

“Technically it’s very difficult to play. The orchestra must play loudly, but play loudly with passion, with conviction. I want to hear force, but not forced sound.”

Another upcoming season highlight is the ever-popular Picnic in the Park, this year scheduled for Oct. 8.

“The theme this year is Lights, Camera, Music. So of course there will be many movie references,” says Shannon. “We’ll have ‘Also Sprach Zarathustra,’ aka the theme from ‘2001: A Space Odyssey.’ We’ll have a tribute to John Williams, and music from ‘Pirates of the Caribbean.’”

The season concludes in May 2018 in the most epic possible way, with a performance of Beethoven’s legendary Ninth Symphony, with full choral accompaniment by the Savannah Philharmonic Chorus. The ensemble has only performed the piece publicly one other time, several years ago.