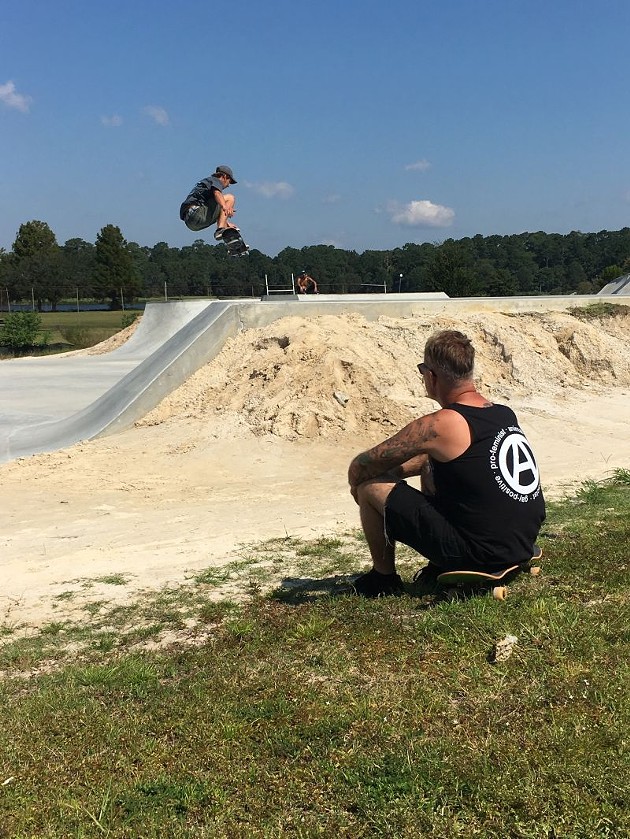 PLASTIC WHEELS shriek on metal and scrape concrete like nails on a blackboard, punctuated by the occasional thud of bones hitting pavement.

It’s a tortured symphony that Savannah Skatepark organizer Ben Maher has been waiting to hear for almost a decade.

“It’s like music to my ears,” he grins as a board loses its rider and strikes the curved wall with a loud thwack.

A Savannah native and lifelong skater, the 37 year-old Maher has headed up the effort to build this community recreational resource since 2004, first on Tybee Island, then on a piece of county-owned land next to Lake Mayer. Former Chatham County Commission Chair Pete Liakakis helped Maher and his group secure a 20-year lease on the property in 2010, but no funds were allotted to build the concrete course.

“We should have worked it out as a tourist attraction, it would have gotten a bigger budget. Or any of kind of budget,” says Maher wryly.

Skateboarding’s early ‘90s reputation as a social nuisance has transformed with the advent of public skateparks, the result of partnerships between communities and the private sector with a shared mission of serving the area’s youth. 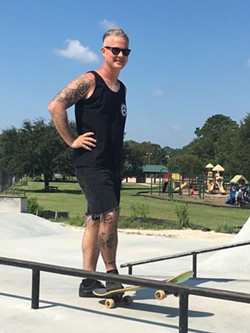 Jessica Leigh Lebos
Ben Maher has been working on the project for over a decade.

“If your city doesn’t have a skatepark, your city IS a skatepark,” is the rallying cry of advocacy groups that argue sanctioned parks curtail skaters’ habit of riding handrails and shredding in unwanted spaces.

While Bluffton, Charleston, Portland and myriad other cities have dedicated millions to funding their public skateparks, no local municipal entities or corporate givers saw value in giving kids a free place to skate. Maher and his dedicated team of grassroots patrons slowly built up the coffers themselves with a series of art auctions and band benefits. Other fundraisers over the years have included oyster roasts, pizza parties and video premieres.

The effort received huge boosts from designer Marc Jacobs, who donated a portion of t-shirt sales that garnered more than $100,000 towards the project, and the Tony Hawk Foundation, which awarded a $25,000 check to the Savannah effort, the largest prize the celebrity’s charity bestows.

Thousands of dollars were still needed when the project broke ground in 2015, and the rest of the park’s final $225,000 price tag came from Savannah’s small business community.

“The people who didn’t have the money to give are the ones that gave.”

During the long stretch between the lease signing and concrete pouring, the grassroots organizer and heavy metal bassist finished his Master’s degree in Marine Biology, got married and secured a legit job with the Dept. of Natural Resources, but he never let go of his labor of love. 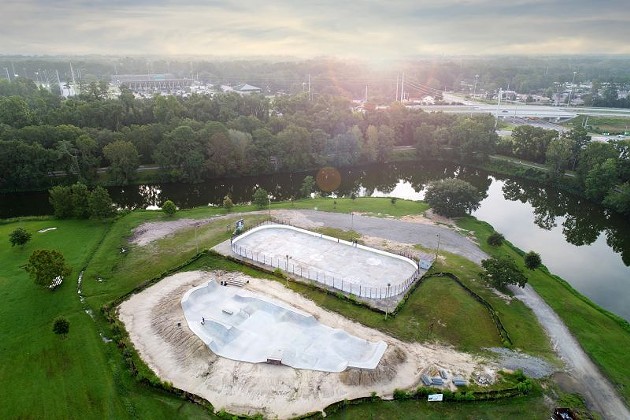 “So many times, I wanted to give up,” recalls Maher, shaking his head as 21 year-old Justin Kesler catches air over one of the park’s basins. “Seeing them out there shredding makes it all worth it.”

The 7500 square-foot course of rails, ramps and quarter pipes was designed and built by Orlando-based Team Pain, whose staff hauled equipment and smoothed rough edges in the heat and rain for six weeks this summer. Due to delays caused by Hurricane Irma, the area surrounding the concrete pad remains bald, but Hutton’s Landscapes will soon be replacing the dirt with donated time and materials.

“It is really cool that we now have a skatepark at that beautiful park by the lake,” marvels folk artist Scott “Panhandle Slim” Stanton, a former professional skateboarder who calls Team Pain founder Tim Payne “The Frank Lloyd Wright of skateparks.”

“Twenty years ago, I never thought such a thing would be a reality,” continues Stanton. “But then again, I also never thought Wal-Mart would have a freezer dedicated to vegetarian food or Misfits t-shirts in the clothing section.”

A grand opening for the Savannah Skatepark is scheduled for this Saturday, Sept. 30, likely attended by some of the elected officials who wouldn’t dedicate a single dollar to the project.

“I’m glad we did it without them. It’s more punk rock, it’ll always have that DIY ethic,” shrugs Maher.

The grommets had their wheels up the minute the cement was dry, and the park has been loud with grinds and nose slides ever since. On a recent sunny Sunday morning, several families were hanging out at the lake, the kids rolling around the pockets and parents lounging on the bleachers.

Sherrie and Eric Breen watched as their three sons—Ian, 13, Von 10, and Fin, 8—bobbed among the seasoned skaters, who gave them a wide berth as they executed more complicated moves. The couple remarked that having a free, accessible spot to shred helps their boys burn off extra energy and allows everyone to enjoy the outdoors.

“This is our second time here this weekend,” laughed Sherrie. “Everyone has been so welcoming, and the older, more experienced kids will give tips and encouragement.”

Maher was out there, too, though multiple reconstructive surgeries on his left knee keep him from reenacting the kickflips of his youth. Still, he’s content that this long held dream is finally a concrete reality.

“I hope it inspires people to be more active, both physically and in grassroots projects,” he mused as another group of kids climbed the hill.

“This is going to serve a lot of people.”

Benefit for the Savannah Skatepark @The Jinx