Savannah Smokehouse: Authentic BBQ in the heart of downtown

BONE-STICKING barbeque for a low price that you can get downtown—that’s the aim of Savannah Smokehouse BBQ & Brew.

David and Christine Cutlip and their family quickly set themselves apart as serious restaurateurs in this bustling town. They first opened Below Zero, inspired by a trip to Thailand, which was followed by Savannah Seafood Shack, and now Savannah Smokehouse.

For the new digs, David drew inspiration from his love of cooking barbeque at home. He also spent some time cooking while serving in the Air Force.

The restaurant sits in what used to be Super Taste and before that a music store. When Savannah Smokehouse got into the place, they lucked out and found the original beautiful brick of the building hidden behind layers of wood and drywall. A bit of art adorned the walls by local SCAD student Jessica Jiang, and the space completely changed.

The giant music shaped sign outside of the restaurant is original as well. David explains that it’s only one or two original signs left in the historic district.

Even the long line of taps behind the counter that pours Georgia made craft beer is artful. What better way to wash down the smoky sweet food than a frosty glass of local brew?

Hired to back the team in the kitchen and collaborate with David on recipes is Chef Curtis Morris. They came up with and make almost everything in house, even the super-secret dry rub used to coat the meat.

The team even put a ton of thought into what they would use to cook their meaty meals. Savannah Smokehouse uses a Southern Pride smoker which circulates the smoke. This cuts down on the ventilation needed during the cooking process, ideal for a downtown restaurant.

As for how they cook the food, David says, “Everything is smoked daily. The big meats, like the brisket and the pork butt, are going to be smoked overnight. We put them on in the P.M. and then when we arrive in the A.M., the suckers are good to go. Nice and juicy.”

The choice in wood used to permeate the meat is hickory. It gives the low and slow cooked pork a mild smoky sweetness. 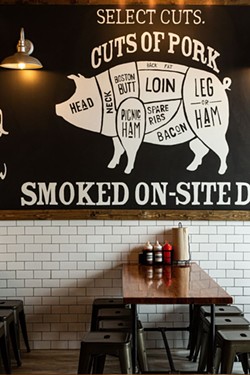 All of the sides are made from scratch, and the barbecue brigade took some time and effort to get every one just right. You can expect the BBQ classics like mac ‘n’ cheese, good Southern cole slaw, vinegary collard greens, beautiful baked beans, hearty Brunswick stew, and fluffy, slap-your-mama cornbread.

Keeping true to the Lowcountry, the restaurant included red rice as well. It’s worth mentioning that the baked beans are meatless for those patrons that do not eat meat.

Even the French fries stood out, made fresh to order and finished with a sprinkling of Savannah Smokehouses’ secret and signature dry rub. Once you try one, you’ll undoubtedly be unable to stop yourself from eating the entire serving.

For David, creating the menu was a no-brainer. “We just wanted good traditional barbeque with a little bit of new funky things. That’s why we have the cornbread bowl on the menu and the Southern egg rolls,” he says.

For your meal, start with the Southern BBQ Egg Roll—a small plate on the new menu. They were so delectable, I wasn’t very graceful when I sat down with David to eat the finger-licking food and to talk about his new spot.

Two giant egg rolls are stuffed with tender smoked pulled pork and briney braised collard greens. On the side you will find a traditional sweet sticky chili sauce.

As I hogged all of the egg rolls, I was sure to tell David how surprised I was that the deep fried rolls were not the least bit dry. I attribute it to the use of the expertly cooked low and slow cooked pork jammed inside.

Another amazing small plate (perfect for sharing if you are feeling generous) is the Cornbread Bowl. Two oversized slices of cornbread sit as the base. Piled on top is a heap of mac and cheese and pulled pork. A light sprinkle of green onions and a dousing of peach barbeque sauce are included as the finishing touches.

If you can fit a bit of each item onto your fork, your bite will have a little bit of every flavor you want: savory, sweet, salty, smoky, and spicy.

For your main, there is no other option than the Sampler For 2. It embodies what Southern food is all about, sharing your food with those with whom you are sharing your supper.

This gargantuan meal is served on a sheet pan which comes stacked with your choice of four meats and three sides. And of course there are slices of cornbread thrown in too.

Just like any true barbeque fan, brisket will always be one of your first choices. For the remaining three meats, I say go for the smoked turkey, smoked sausage, and the ribs.

The smoked turkey stood out compared to the other meats. To serve sliced turkey that is as moist as the brisket it sits next to is no easy feat. And this brisket ain’t no joke.

As for the three sides, truly anything you pick will accompany all of the meats like peanut butter and jelly (or peas and carrots for you Forrest Gump fans).

If you are feeling stingy, and do not want to share your food, a classic barbeque sandwich is ideal for you. But I do insist you get their fries as your side.

David plans to keep innovating the menu and pushing himself and his team more and more everyday, especially considering it is only been a few weeks since Savannah Smokehouse opened.

He says that not only will Savannah Smokehouse push their menu to be better and better, but he hopes that they will keep growing into other avenues.