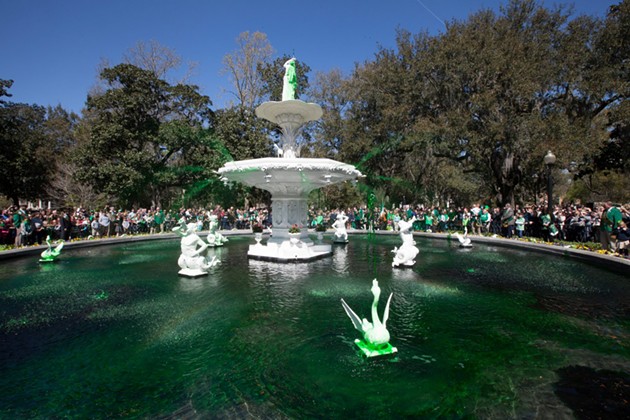 Courtesy of the The Savannah St. Patrick’s Day Parade Committee
The Greening of the Fountain celebration of 2018. This event will be held virtually in 2021.
The Savannah St. Patrick’s Day Parade Committee has announced that it will present several celebratory events only virtually in March of 2021, according to a statement issued by the organization early on Feb. 12. “Although we are unable to have the parade and election of the grand marshal this year, we know that it’s important to respect tradition and our Irish heritage as much as possible while ensuring the safety and health of others,” said John Fogarty, general chairman of the Savannah St. Patrick’s Day Parade Committee. “To that end, we are working with the City of Savannah’s guidelines regarding the ability to film private events in traditional locations that we plan to virtually share with the public.” According to Fogarty, the parade committee’s events celebrating the Celtic Cross Ceremony, Greening of the Fountain, Jasper Green Ceremony, and St. Patrick’s Day Mass will all be held virtually. “These four events represent four important aspects of what we stand for. The Mass represents the honor given to a great saint who spread Christianity throughout the pagan land of Ireland. The Celtic Cross represents our heritage and past immigrants that came to this country though struggle and turmoil. The Jasper Green represents how the Irish inserted themselves into this country and fought to build it up from the Revolutionary War and beyond. And the Greening represents the whimsical part of what the season offers as a fun way for families to enjoy the season,” Fogarty stated. Fogarty added that “Due to these extraordinary times and out of an abundance of caution, we will be filming these events and presenting them virtually to the public. This is much different than in 2020, when we had already elected the parade grand marshal and held several events such as the Celtic Cross Ceremony before we had to cancel that year’s parade. Now we have more data and information so that we can make a responsible decision in a more timely manner." In March of 2020, the Greening of the Fountain celebration was successfully held in person shortly before Savannah's St. Patrick's Day Parade was canceled as the COVID-19 outbreak became widespread. Previous emergencies have caused Savannah's St. Patrick's Day celebrations to be canceled or curtailed over the course of history, according to Fogarty. “Since the first Savannah St. Patrick’s Day Parade in 1824, there have been extraordinary times when we had to cancel the parade and other events, and this is unfortunately one of those times. Our top priority has always been to ensure the health, safety and welfare of our members, participants, and attendees,” Fogarty noted. In January of this year, the City of Savannah announced that it was not issuing any special event permits through March 2021. As a result, the parade committee had to cancel the 2021 parade. Fogarty said that “after the 2020 parade cancellation, we were hopeful for a return to normal in 2021 and we had applied for the special event permit for the parade. Now it is important for us to be united with the recent decision and we look forward to celebrating our parade and its traditions in person in 2022.” The Savannah St. Patrick’s Day Parade Committee will provide more details about the virtual events on their website, savannahsaintpatricksday.com, prior to March 17. 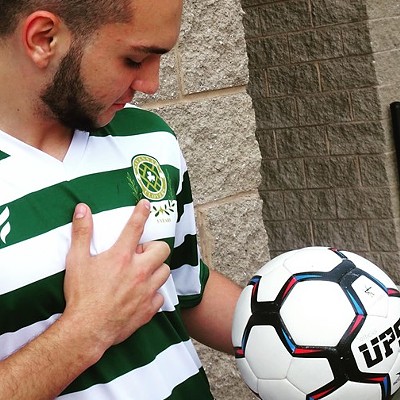