The Dark Romantic’s style renders haunting environments and sheds light into the darkest depths of human capability. Savannah Stage Company will capture it all in their trademark bare-essentials style. 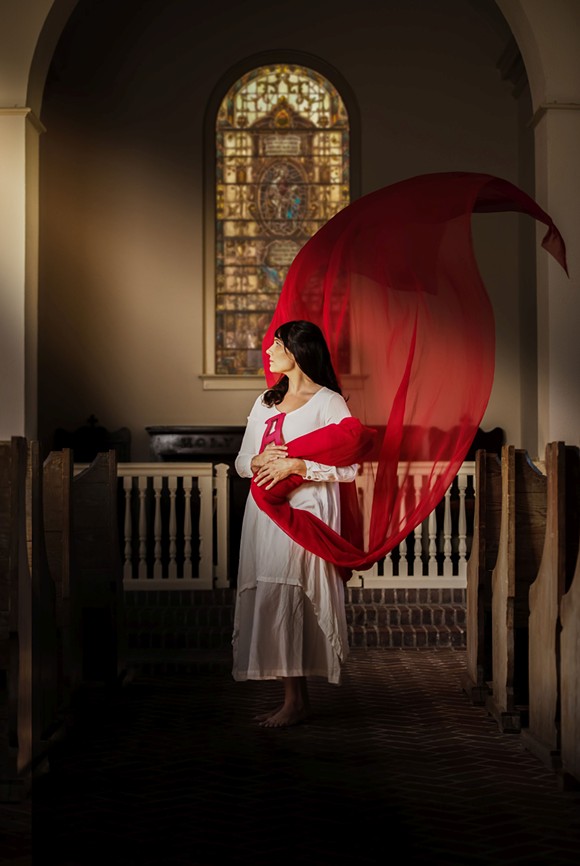 McCall and SSC Artistic Director Jayme Tinti trace their friendship back to 2008 when they were part of the same theatre company.

“We became fast friends and developed the same artistic vocabulary,” McCall shares. “We don’t spend a lot of time in the same place anymore, but we always find something artistic or professional to talk about. It’s just so reassuring to know this is a friendship that will last forever, because it’s based on that.”

For many folks, it’s been awhile since Hester Prynne’s name came up in conversation: let’s refresh.

It’s 1642 in the Puritan town of Boston. Prynne has been convicted of adultery and is forced to wear a scarlet letter “A” on her dress as a mark of shame. The governor demands Prynne reveal the name of her lover; she refuses. When Roger Chillingworth, seemingly a newcomer, arrives in Boston, everything changes. Chillingworth is actually Prynne’s husband, presumed to be dead at sea for years. When he finds out that Prynne has been unfaithful, Chillingworth decides to find the name of Prynne’s lover and the father to her newborn baby, Pearl. It’s rare to see the classic story told on the stage.

SCC will use an adaptation of The Scarlet Letter penned by Catherine Bush; the Company has used a number of her adaptations in the past. As he compared Bush’s adaptation and Hawthorne’s original novel, McCall found that Hawthorne’s famously lengthy descriptions comprise most of the work.

“It’s almost a perfect medium for it,” he says. “The theatre is the language of metaphor. A line means a thousand different things, as opposed to a film, where it’s one thing. As we go through, we’re not necessarily going back to the novel, but I have it in the back of my head and it informs a lot of my decision-making.”

There is a wealth of knowledge to be gleaned from The Scarlet Letter for people of all ages.

“I think this is one of those stories that is really a tent pole story—it holds so many stories within it,” McCall says. “That’s why it’s an endearing classic. On the surface, it’s about a woman who committed adultery and has a child to show for it. But it’s also a story of forgiveness and how important forgiveness is. We have people dying in the show because they’re trying to uphold the strict moral standard of religious ideology while denying the human aspect of ourselves. We are not perfect—we can always strive to be—but when moments of weakness or mistakes happen through a puritanical lens, we have to forgive ourselves and carry on. 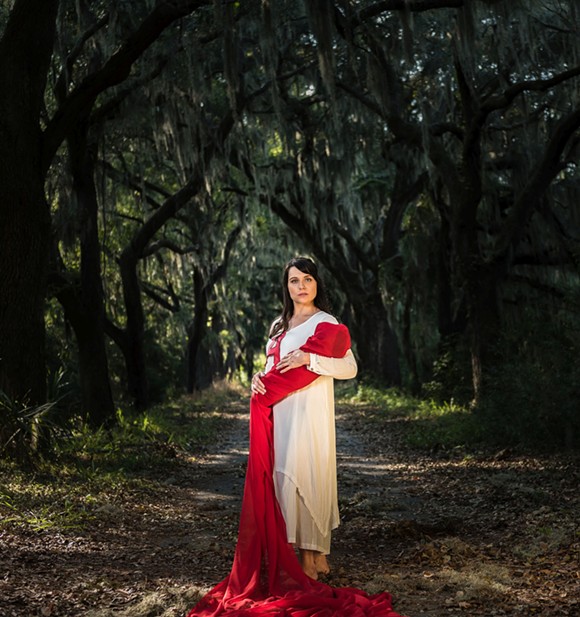 “We keep talking about this community. We embody them with a Greek-like chorus in the context of the show, so that you really get to see how necessary community is. All community—when Hester doesn’t have that connection to the community at large, she has it with her daughter. That’s something we can all relate to, is seeking communities and seeking to belong. I guess it’s quite appropriate at this time. That’s what keeps coming out to me: the need to connect, and that spiritual level of connection.”

McCall has enjoyed working with some familiar faces and new folks, as well.

“They’re all locals, students, and working professionals in the community, and they are so gung-ho and wide open and hungry to push themselves,” he praises. “I feel like the biggest cheerleader in rehearsal. You see them try new things and push themselves, and if one pushes, then the rest of them start to push. They take leaps of faith and use imagination and bravery to put themselves out there.”

“Savannah Stage Company has a special place in my heart,” he shares. “I call it my artist haven! We can come and just focus on putting together the best play with the best acting we possibly can under limited resources.”