Caamp @ Ships of the Sea Museum

Ohio natives Caamp come to Savannah for their first Stopover appearance, a headlining one at that.

Bandleaders Evan Westfall and Taylor Meier met in high school and began playing music together, later adding bassist Matt Vinson for their third album, “By and By,” released last year.

Caamp is a rising star band to watch, and their set Saturday night at Ships of the Sea is one not to miss. We talked with Westfall last week about the band’s history, Spotify playlists, and the power of a really good soundtrack. 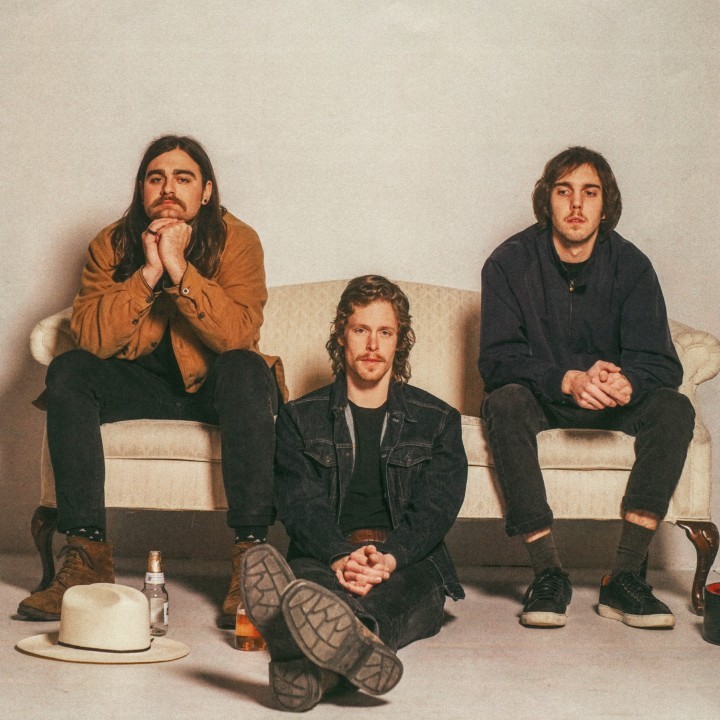 We’re not doing South By this year—we’re just doing our own thing, hitting some cities we didn’t get to hit in the fall. We’re still supporting our album, “By and By.” We’re playing a couple festivals and I’m pumped to get down to Savannah for a couple reasons, but definitely the weather. And I heard you can drink on the street, too, which is pretty appealing.

How did you and Taylor meet and get Caamp started?

We were in high school and we had a class together. We didn’t really hang out before that, but for some reason we watched “Remember the Titans” in class and we bonded over the soundtrack. Every song that came on, we were like, “Man, that’s a sweet song.” I knew he had a good voice, and he knew I was playing guitar at home and stuff.

I had him come over to my basement one day after school and I started learning covers. We weren’t planning on playing any shows or anything, just doing it for fun, and I just wanted to hang out with him and get to know him better. I guess that’s where it started.
Then Tay moved down to Athens and went to OU, so I went to Wittenberg. I lasted six days, so I moved back home with my folks and Tay was down there. We were trading song ideas back and forth, and I’d go visit him and we’d party and jam. Towards what would have been our junior year, he started playing some open mics down there.

Senior year, I was still at home in Columbus and he was like, “Just come down and live here and we can make an album and play around town.” That’s what I did—I went down there and started playing open mics and whatnot and started building this organic fan base down there. We recorded the album and put it out on our own, didn’t really expect much of it.

A couple months later we both moved back into this house in Columbus together. Our songs somehow landed on a couple Spotify playlists and we started getting calls and emails from industry folks all over the country, wanting to come out and see us play. We hadn’t really played a show before, so we were freaking out. We were like, “Okay, we’re a band I guess, we’ve got to play.” We were kind of forced into it; we were a band, but we were kind of jump-started into a band once the Spotify thing happened.

We ended up getting pretty lucky with touring—we hadn’t toured before, ever, and in November 2016 we were just at home in Columbus picking up shows here and there when we could. The band Rainbow Kitten Surprise heard our music, probably through Spotify, and they asked us to tour with them. At the time, they were still getting started, so we were playing 300-cap rooms. They were in a little van and we were in my Kia Sorrento, and they took us around the country a couple times and that helped us land other tours.

And now you’re the headliner for this festival—

Yeah, which is fucking wild! I don’t know how that happened. There are so many good bands we love that are not headlining! It’s like we gotta bring it.


What’s it been like to go from just playing music for fun to now being a headlining band?

We’d always wanted to do it, but we wanted it to go a certain pace we felt comfortable with. We didn’t want to jump in and sign a huge record deal and then … We just like to be low-key about everything. We like to maintain that indie band cult following vibe. The bands we listen to are all like that. We look up to a lot of other bands; we just try to base our careers off what are our favorite bands doing, what can we do.

Who are some of those bands you look up to?

That’s a tough one always. When we were starting out, Tay and I were listening to a lot of Trampled By Turtles, Houndmouth, Bon Iver and the Shouting Matches, Justin [Vernon]’s other rock project. Stuff like that. It’s grown since then, it’s a little different now, but we still look up to all those guys.

Tell me more about the third album, “By and By.”

Matt Vinson, who plays bass, recorded our second album and that’s how he ended up playing in the band. He’s a great engineer and whatnot, and we had to beg him to play. We were starting to play bigger rooms and we wanted a bassist really bad, and he’s a great musician. He was out in Denver and we were in Columbus, and he would’ve had to move, it was a whole thing.

But he ended up wanting to do it, so for the third album it was the three of us in the studio working. Tay had a bunch of songs, pretty much full songs, that he brought into the studio and we just made up parts in the studio as we went along. That was a big chunk of the record. Some of the songs were songs that Tay and I had from four years ago that we had written and not done anything with. A couple of the songs we all wrote together, just like at my house over a couple days.

It’s a nice mix, a lot of different writing. It’s Caamp songwriting, Tay’s lyrics are still at the forefront, we just beefed it up instrumentally. We wanted to try some different things with drums and electric guitar and things like that.

Every once in a while, if we’re in the same room jamming, something will pop out and we’ll stick with it. But when we first started out, Tay and I were in the same room face to face sharing ideas and stuff, and then we moved back home and it was kind of like that still. Tay would bring a lot of ideas and songs and then I would fill in the blanks with drums and bass and whatever. Then for the third album, Tay lived on his own and would bring over songs and we were all like, “Oh, that’s a sweet song,” and come up with our parts for it.

It’s all over the place, but a lot of it comes from Tay starting out something on the guitar and bringing a bunch of words and showing it to us and then we put our parts over it.

When you’re done with this leg of the tour, what are your plans?

We’ve been talking about the next album and everything. We’re really excited to get started on it. We met a couple of times and showed a couple initial ideas and just talking about what we wanted it to sound like, but it’s still very much up in the air—what it’s going to sound like, what it’s going to be. But it’s exciting at least that we’re starting to talk about it.

My favorite thing is being in the studio and writing songs, collaborating with my buddies and creating something from scratch. That’s my favorite thing in the world. But it’s definitely the cherry on top to play it for a thousand fans every night, getting to see the country and meet new folks and hear their stories about how they interpret the songs. That’s just a bonus. It’s super cool and I wouldn’t trade it for the world.