Durand Jones and the Indications @ Ships of the Sea

DURAND Jones and the Indications throw it back to the glitz and soul of the 70s, but with a modern flair.

Founding members Frazer and Blake Rhein met in college, both studying audio engineering and playing in a rock ‘n’ roll band together. Rhein also ran sound for a student performance class that Durand Jones was in.

“He heard Durand sing and was like, ‘Me and Aaron are writing songs together, why don’t we all hang out?’” recalls Frazer.

The band recorded their self-titled debut album for under $500 and called it a day.

“After we put out the first record, we were like, ‘Hey, we did it! That’s great, we put out a record that’s beyond our wildest dreams of what we thought this project was going to be,’” remembers Frazer. 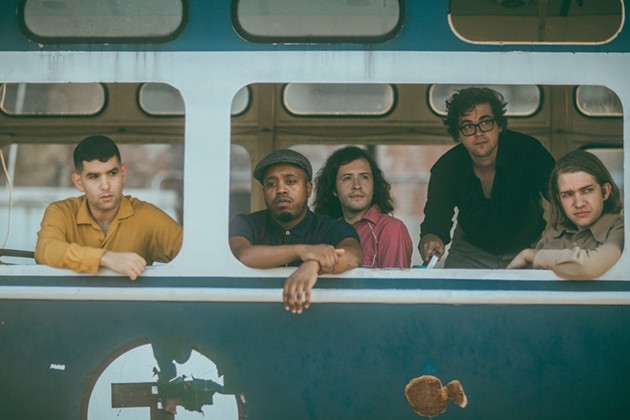 But then came a record deal with indie label Dead Oceans, which turned out to be a game changer.

“We realized we that we could actually have a real budget to create something that we dreamed of making back in 2012, ’13, ’14,” shares Jones. “When we were doing the original album, we were still figuring things out ourselves as musicians, as humans. None of us have ever really dove into background singing, group vocals, that sort of thing, but we all knew that we really enjoyed that kind of singing. The challenge was really to create some good music where it could feature multiple voices, which was really cool.”

Their second album, “American Love Call,” released last year, features vocals by both Jones and Frazer, who complement each other’s voices so well.

“I started singing when we put our first record together,” remembers Frazer. “We cut a song and I was singing it in my chest voice, and it just wasn’t sounding right. So I was like, ‘Okay, Durand can do this song justice.’ We recut the demo for Durand to sing on and I wound up singing the scratch vocals so he’d know what the vocal melody was, and we listened back and were like, ‘Hey, that actually sounds pretty good!’”

The writing process was fairly different for “American Love Call” than it was for their eponymous debut album.

“For me, the best part of that process was the writing sessions in Chicago and New York City with Blake and Aaron, when we were just hashing out ideas and really just letting our minds go free and really sing, really vibe,” says Jones. “When it came to the studio experience, I think it was something new for all of us with that time schedule and working with string players and harpists and all these different instrumentalists. It was something new and really cool to do.”

During the recording process, Jones received news that his grandmother, who was a major supporter of his music career, only had a few days left to live.

“I had to make the decision to stay in New York City and finish the album or go home and see her one more time,” says Jones, “and I chose to stay because I knew that’s what she would have wanted me to do. But that was really tough and difficult, and I’m hoping that my next studio experience with this band will be a little more light-hearted and not so heavy!”

There’s no doubt this band will have many more recording sessions in its future.

“It still feels surreal in a lot of ways,” admits Frazer. “The tour we’re on right now is a lot of cities that we’ve never played before, smaller places because the last couple years, we’ve been focused on the bigger cities where there are more people. Even in these small towns, you show up and play these songs and from the stage I can see people in the crowd singing songs and I’m like, ‘Hey, how do you know this song? We’re just making music in the basement, how do you know this?’ It’s been really special and beyond what we ever anticipated when we started just hanging out together on Sundays.”

For this set, expect a soulful set designed to get you dancing.