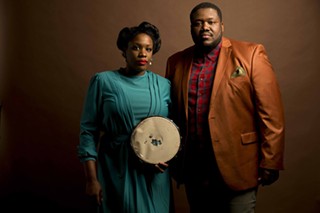 The War & Treaty will perform at Trinity United Methodist Church on Saturday, March 9.
90 performances will take place over the course of March 8-10 at Savannah Stopover Music Festival, including a Thursday night headlining set from Seattle's The Cave Singers, a wild Friday night Club One performance from hip-hop star Kemba, and an Americana, Soul, Gospel and Country Night on Saturday with Liz Cooper & The Stampede, The War & Treaty, Colter Wall, and Wild Child. The festival has announced this year's special events, including: Thursday, March 8th: Opening Night at Ships of The Sea with an all Georgia lineup including Payne Bridges (SAV), Ruby Velle & The Soulphonics (ATL) and Larkin Poe (ATL), food trucks, art exhibitions and local vendors.

Saturday, March 10th: Stopover In The Yard @ The Grey featuring a special performance by Nashville’s Becca Mancari to benefit the Savannah LGBT Center and a special fixed-price outdoor menu by The Grey.

Saturday, March 10th: Closing Night Event with of Montreal at Ships of the Sea Museum. Athens’ glam rockers of Montreal return to Savannah for the all-ages party of the year. Up-and-comers Gus Dapperton and Colin Caulfield (DIIV) will open the night. Costumes encouraged.

The weekend begins on Wednesday, March 7 with "The Night Before Stopover" in conjunction with Graveface Records and Green Truck Pub. The event includes a Lagunitas Pint Night at Green Truck, which benefits the Leukemia & Lymphona Society, and a four-band lineup at Graveface Records & Curiosities from 5-10 p.m. The event is free and open to the public (no Stopover passes needed).

Secret shows will include "Lot 33 on the lower level of East End Provisions as well as B. Matthews. Enjoy a Friday afternoon Happy Hour Secret Show on March 9 at Edgar's Proof & Provisions. All secret shows will be announced one hour before the performance via Twitter.

The full festival schedule and additional information can be found via savannahstopover.com. Tickets are available.