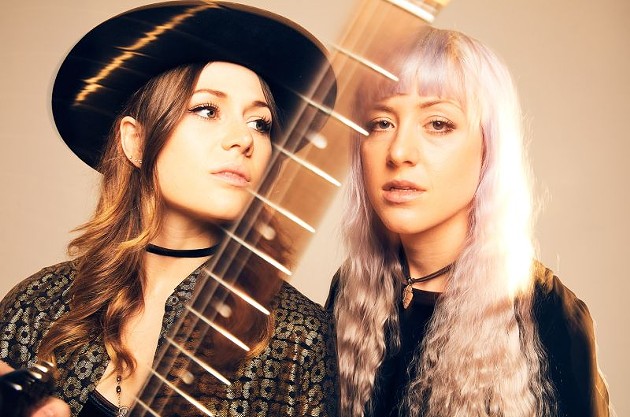 The in-demand Lovell sisters have resided in Nashville for two years now, but the sisters grew up in Calhoun, Georgia.

“Calhoun is a tiny place,” Rebecca Lovell says. “When we got a Longhorn, it was a big deal! We led very quiet lives—our folks homeschooled us, we grew up wild on 70 acres in the country. When we were introduced to bluegrass, it was relatively late—we were 13, 14 years old.”

After attending a bluegrass festival in the Tennessee mountains as teens, the sisters made connections and mentors in the world of roots music. They formed a group, the Lovell Sisters, in 2005; that band disbanded in 2009, and the next year, Rebecca and Megan returned as Larkin Poe.

2017 welcomed the release of Peach, a record of originals and killer blues covers and their third full-length to date. Rebecca’s raw guitar work, Megan’s dirty slide guitar and their signature harmonies are at their finest on the release, which they self-produced.

“We did what felt natural,” Rebecca says. “It was like a long weekend of work that brought Peach together. We went in and it was really fast-paced and instinctual.”

The record showcases a blend of roughed-up Southern influences and contemporary pop underpinnings, as heard on the original tune “Pink & Red.”

“Some of the electronic stuff is my passion,” Rebecca explains. “Growing up in Atlanta, there’s a great pop scene. Some of those sounds are really addictive and unnatural in a way that Meg and I really like. We’re bringing roots instrumentation to the table and it’s fun to mash those together.”

After the wild acclaim surrounding Peach, Larkin Poe hopes to release a new album in 2018.

“We’ve got a good batch of songs fleshed out, we’re just waiting on the people who are late to the party,” Rebecca laughs. “We’re waiting for five or six more songs.”

“You gotta take everything in stride,” she says. “Last year we were busy making a record and getting out on the road...we take it as it comes.”