The virtual festival series will showcase a variety of talent

As with all events and festivals slated for 2020, the Savannah VOICE Festival found itself in limbo at the onset of the coronavirus pandemic earlier this year. They were quick to pivot, however, and began to navigate what events could look likely virtually so as to carry on the important work they’ve been doing for singers and performers.

Now, they’re prepping the launch of their first stay-at-home season of virtual concerts, which begins on Sat., August 8 and goes throughout the month until August 22. The series of virtual shows begins with a kickoff concert featuring voices from around the country.

“I think the evolution of this was sort of easy, in the sense that as sort of the pandemic hit, we knew that there were things ahead that would be cancelled. Including our gala event in New York, which had to be cancelled immediately,” SVF co-founder and Executive Director Maria Zouves tells Connect.

“We saw that, and then we started talking to artists, and we realized that they were frightened, and they wanted to do something. Our patrons were also concerned that everything was going to be shut down, and the music was going to stop. Those two things really just lead us to say, ‘I’m sure we can figure something out.’” 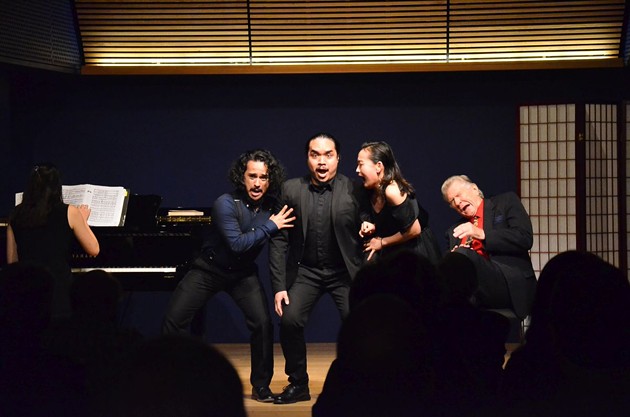 Opera as Drama Showcase from 2019.

They’ve certainly done more than that—curating an extensive schedule of virtual shows that are being put together remotely through pre-recorded performances that will air exclusively on the show dates. Each show will start at 7 P.M., with a rebroadcast the following morning at 11 A.M.

The eleven shows will feature singing, of course, but will also echo the spirit of classic variety shows and offer entertainment that promotes positive and inspirational messages.

“Two months was not enough to create 500 minutes of music video, but we spanned out really across the globe. We had singers in Brazil and Argentina and Italy. All sending video files and rehearsing on Zoom,” Zouves says.

The performances were all recorded in the performers’ homes or a setting of their choosing, with the SVF team helping to curate and direct their recordings. They opted for the pre-recorded route rather than attempting to do a fully live stream, which has allowed them to not only ensure optimal audio and video, but also to edit in segments with prominent locals who will share trivia, and create a flow that really does feel like a variety show.

The entire team at SVF has been working to put together the shows, including Zouves’ son, who is a video editor.

Inspiration for this direction, Zouves says, came from the variety shows she grew up with but also the recent Saturday Night Live shows that were filmed remotely by cast members.

“They activated right away; they just did it right away and started working from home. I’m a big SNL fan, and I watched it and realized, ‘Wait a minute! I can do that,’” she says.

There is also the aspect of reaching a wider audience than perhaps they could at previous festivals that were held in person. Because the festival is virtual, it opens up the audience to those outside of Savannah and gives more of an opportunity for connectivity.

“One of the things that I say is that we’re both confined to a box now, and have the real estate of the vast cyberspace. There’s a dichotomy there, and there’s a lot of responsibility to get it right,” she says.

One of the performers in the first show is doing something particularly notable as part of a segment called “Welcome to My Window,” which is intended to showcase singers’ environments during quarantine.

“It’s her first program, and she did it all about Black Lives Matter because that was what was going on in her world at the moment. That was her world, and then she picked this French piece about being jealous of someone’s beauty. She picked it,” Zouves says.

“My son edited it, and he said, ‘Mom, am I doing this well? I wanted to do it well.’ He wanted to do justice to the Black Lives Matter movement. I watched it and it gave me such chills. It was so poignant. I said, ‘This definitely has to be on the first show.’”

As for the future of SVF and their newfound virtual format, Zouves enthusiastically says there’s no reason why they can’t keep exploring streaming and virtual concerts as a way of providing art and entertainment to their patrons.

“There’s no reason why we can’t have this as one of the things we do,” she says. “We’ve learned so much during this process—why put it away and not do it going forward? It’s very creative. These shows are a very wild ride, from start to finish.”