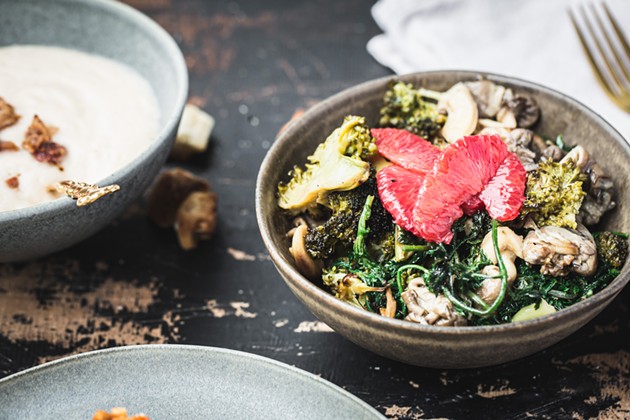 Lindy Moody
The broccoli, mushroom, and grapefruit salad included in a recent Eden Box prepared by Chef Jared Jackson.
It is believed that the supper-club phenomenon started in the 1930s. Like any good fad, the idea has died and resurfaced with the times. Over the last decade, supper clubs have been popular epicurean destinations of the foodie scene. A supper club is the best way for a chef to break free from the four walls of a restaurant and do something completely different and unexpected. Oftentimes each dinner is held at a different (and sometimes secret) location, allowing for the kitchen to constantly draw inspiration with new environments. The concept has also served as a way for restaurateurs to raise funds for a brick-and-mortar restaurant they hope to open one day. When the pandemic hit, the supper club fad died once again. Initially, there was no way to host a full room of guests while following coronavirus safety precautions. But out of necessity, restaurateurs, chefs, and kitchens have found a way to adapt to our new normal. Eden Supper Club was one of the first supper clubs to pop up in Savannah, and it is now the first supper club to evolve with the times. With the inability to host its exciting seasonal dinners, Eden Supper Club introduced the Eden Box − the supper club experience in a to-go version. Your own dinner table can now serve as the hot place to dine.
click to enlarge 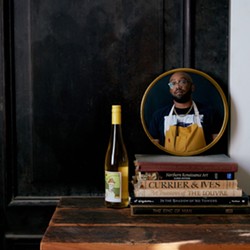 Courtesy of Eden Supper Club
Chef Jared Jackson.
The creator of Eden, Chef Jared Jackson, explained his supper club’s evolution. “The Eden Boxes themselves sort of spawned out of necessity. When the world shifted last year due to the pandemic, I noticed the food industry had the unique challenge of finding different ways to provide our services,” Jackson said, adding that this was especially difficult for “an industry based fundamentally on people leaving their homes to enjoy our food,” forcing foodsmiths to get creative. “This pandemic was and continues to be a big problem for chefs and restaurant owners all around the world. I think I honestly lucked out in a way, having built a strong community of patrons who were still interested in the experience of Eden,” Jackson continues. “I thought that if we could minimize the risk and cater towards how the world was shifting, we could still reach those people and provide them with a unique experience − just in the comfort of their own home.” The Eden Box is available for two at $75, which gets you enough food to feed a tiny army. I ended up parceling mine out over a couple of meals. The ‘For Four’ option is only $125. “Typically an Eden Box includes three to four courses for two or four people to enjoy. Usually two starters, a main, and something sweet. I designed it with the thought of it being at least two meals, or one really large one that you might not get up from the table after,” Jackson said. “I've tried to keep the dishes simple at heart but intentional with flavor and seasonality. So our fans might miss the full experience of Eden Supper Club, but the boxes provide a little taste.”
click to enlarge

Lindy Moody
Chef Jared Jackson's lasagna and pound cake.
Each box normally includes four different dishes handmade by Chef Jackson himself. And even though you may not get the full experience of dining out with a take-home box, customers still get the full taste of Eden. “My method for creating menus usually stays the same. I think about where people are eating and how they are going to likely experience the food, and move from there. I think of flavors of the seasons, which just pushes the creative train forward,” Chef Jackson told me. For the box I ordered, the menu included a flavorful cauliflower soup, a bold and spicy broccoli salad, red-pepper lasagna, and classic pound cake to finish. Because there was so much food, I split it all over the weekend. For my first meal, I ate the first two dishes − the soup and salad. The Loaded Cauliflower Soup is called “loaded” because Chef Jackson created it to be topped with buttery croutons, warm gooey Brie cheese, and umami-filled bacon. The soup itself was a standout. Extremely creamy, almost like it was whipped into mousse, and full-bodied in flavor. To pair with the Loaded Soup, I chose the bold and spicy Burnt Lemon Broccoli Salad. The second day I heated up the Eden Lasagna, which was my favorite dish of the bunch. Chef Jackson makes every noodle by hand to layer his unique take on lasagna. It was a showstopper because the Eden Lasagna did not taste like the often-heavy and over-sauced dish. Somehow, Eden Box pulled off a hearty fresh mozzarella-jammed pasta that was bright due to its roasted red pepper and heirloom tomato sauce. If you missed the chance to order this lasagna, don’t get upset, because according to Chef Jackson, “You will probably see a pasta dish on every other menu, just because I love making pasta. I’ve always had an attachment to making pasta. Cooking is craftsmanship just like baking. I feel like making perfect pasta requires another skill set. I’m far from perfect yet, but I work at it often.” It was hard to save the dessert for last, and I am slightly disappointed I waited so long to try it. The Sour Cream Pound Cake was so delicious I asked Chef Jackson for the recipe. You know a pound cake is perfect if it can stand up to the buttery Southern pound cakes that your grandmother or mother always makes. Chef Jackson’s hit all the markers: a thick sugary crust on the outside with an almost undercooked buttery center inside each slice of cake.
click to enlarge 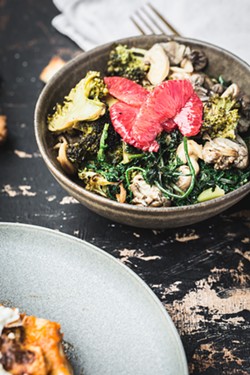 Lindy Moody
The lineup of dishes in each Eden Box changes with the new ideas of Chef Jared Jackson.
Other Eden Box menus have included items like Honey Roasted Butternut Squash, Meyer Lemon Risotto, Buttermilk Pie, and Pumpkin Pappardelle. To order a box of your own, says Chef Jackson, “Right now the best place is our social-media @edensupperclub on Instagram and Facebook. Updating the website will allow me to offer them through my platform. Hold tight for that, but still visit the website edensupperclub.com. Join the e-mail list and we will send e-mails with the menu once a week.” He elaborated, “I have a goal of having one every week available. Making a few updates to my website in order to streamline things in that department. Hopefully by the spring I can do it once a week consistently. For right now, I’m creating a new menu every other week, which will be available for two weeks.” There are plenty of Savannahians that missed the chance to experience Eden Supper Club for what it can be in person. This year Eden is slowly opening the doors to its well-loved supper-club experience. In early February, Eden joined up with Savoy Society and the Together in Paradise studio to host yet another one-of-a-kind event. Visit Eden’s website or Instagram page to find out the next time Savannah with have a supper club to enjoy. Eden Supper Club: visit edensupperclub.com for more information. Check out epicuropedia.com to read more by Lindy Moody.