SAVANNAH MUSIC FESTIVAL Executive and Artistic Director Rob Gibson is now in his 15th year at the helm of the beloved local cultural event.

This year’s edition promises an even more diverse and compelling lineup than we’re already accustomed to, which is saying quite a bit.

We caught up with Rob last week to talk about the performances, and his point of view on the state of the arts in Savannah.

There are some really unique shows this year. How do you find these things? 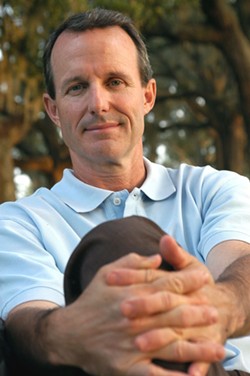 The Brahms vs. Tchaikovsky show we’re bringing, for example, I saw that in Bristol, England, at the Bristol Proms.

Most people don’t realize the two composers were contemporaries and pretty much detested one another. There’s an actor playing Brahms and another playing Tchaikovsky, in a fictitious script about their rivalry that plays out between the pieces of music.

This uses a lot of cameras to give the audience multiple views, in a multimedia/theatrical presentation. The presentation makes it very modern, and also interesting for people who aren’t used to attending chamber music.

Their performance in Savannah is literally the second time this production will ever happen, anywhere. And I think it’s actually a better production here, because we’re spending more money with the cameras and big screen.

We try every year to give people one-time-only productions like that. We have special double bills that happen only in Savannah. You literally can’t see them anywhere else in the world.

What are some other things this year that have you hyped?

We’ve got a fantastic group from Haiti, Chouk Bwa Libète, making their U.S. debut at the Savannah Music Festival. I saw them at Peter Gabriel’s WOMAD Festival. It’s one of the most incredible performances I’ve ever seen. I decided we had to have them in Savannah.

They’re not playing anywhere else in the U.S. We’re flying them in from Port Au Prince to Atlanta and down to Savannah, just for this! You can imagine in this era how challenging that was.

And they will play in a room that holds only 300 people. This will be one of the most intense performances you’ll ever witness.

It must be an ever-increasing challenge finding the right venues in Savannah for these acts.

The Johnny Mercer Theatre was modern — in 1967! But it’s tired as a facility. Performers and audiences today expect a more modernized and better sound.

Charleston had a version of the Johnny Mercer Theatre, the Gaillard. They redid it, and shrunk the seating from 2800 to 2000 seats. But it cost $150 million to do it.

Now they’re talking about building a whole arena here in Savannah for about that same amount. Which really can’t be done for that amount of money, whether people realize it or not.

Right now, every single day on I-95 there are artists and musicians in a tour bus driving right by Savannah. They’re going from Charleston to Jacksonville, or maybe from Asheville to Miami. We just don’t have the venue for them here.

I love the Lucas and Trustees for what they are. But they were built as movie palaces, in the ‘20s and ‘40s respectively. Their design is clearly for watching a movie on a big screen, the purpose for which they’re originally designed.

Savannah also has historic places of worship, which are very unique places to have performances. They’re doing great things over at the Ships of the Sea, which we’re happy to use as a venue.

And of course the Charles Morris Center has been a fantastic venue for us. We practically live there during the Festival.

I know a lot of folks who specifically come to see shows at the Morris Center and Ships of the Sea because they say they like the intimacy of those places.

Live jazz in a small venue can be a life-changing experience.

We’ve got some master level jazz people coming. We’ve got Rodney Whitaker, an incredible bass player who has over the last 12-15 years built an amazing program at Michigan State. It’s a band made up of faculty members, so they decided to call themselves the Professors of Jazz.

That same night we’ll have Marcus Printup from Conyers, Georgia. He created this group called The Youngbloods, basically kids between 18-23

So we will have the Professors of Jazz and the Youngbloods playing one smokin’ night at the Morris Center.

We’ll have Joey DeFrancesco, probably the best organ player of our time. We’ve got Ike Stubblefield, the best Hammond B3 player in the South today. And the Monk And Dizzy at 100 show at the Lucas will bring a marvelous cast of people together, in more of a big band setting.

Challenges aside, booking this Festival must be a blast.

I’ve been doing this kind of work for basically 35 years. I’m in my 15th year at the Savannah Music Festival. I like to think I’m getting better at it (laughs). Right now we're trying to finish booking the 2018 Festival. I'd say we've got about 60 percent done. We've even got some for 2019 done.

It’s tricky because classical music really has to be booked two years in advance. You can book some bluegrass about 9 months to a year out. You can’t book most rock music until about 5-6 months out at the most. That’s just the nature of that type of music. They can wait for the phone to ring.

For example, the Avett Brothers, who have been with us before, they have changed and evolved so much. They’re a well-oiled machine now. They’re doing two nights with us, but they can sell out 12,000 seat arenas now with no problem.

Jason Isbell is another one like that. He played at Ships of the Sea last time he was here, and since then has just taken off. He’s graduated, in a sense, to the bigger Johnny Mercer.

Where does the upcoming Cultural Arts Center fit into your future plans? Or does it?

Well, it’s being built as we speak, and it’s happening regardless of what you and I say about it. And I’ll tell you the same thing I’ve said in numerous op-eds and letters to the editor.

All I ever wanted was for them to rethink the Cultural Arts Center as more of a public/private partnership. Then you could go out and find those people willing to gift a million dollars to put their name on a seat.

That would alleviate some of the burden on taxpayers. Then you can take what’s short in the budget and create a finer performance space.

But that just wasn’t the thinking out of City Hall at the time. I think the new person in that position [City Manager Rob Hernandez] will do a much better job. I think he has a real task to do in front of him. But I’m pulling for him.

I will say we are lucky to live in a city that continues to fund culture like Savannah does. That’s not a given by any means.

Of course you remember what happened when it was suggested to slash cultural funding. Don’t think that’s not going to come up again someday.

The City of Savannah remains our largest supporter and we value that relationship. We’re helping to sell 12,000 hotel rooms, we’re filling up restaurants over town. We don’t look at the funding they give us as a gift — we think of it as the City making an investment in what we do.

The Atlanta Journal-Constitution just called us “one of the gleaming musical treasures of the Southeast.” You can’t buy that type of positive press for our city. I don’t know very many other local cultural organizations generating that kind of national spotlight.