Six films will be presented along with accompanying presentations 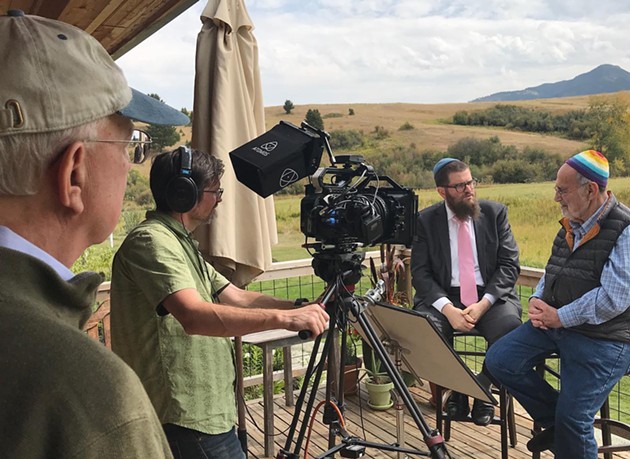 Courtesy of "The Rabbi Goes West"
A scene from the filming of "The Rabbi Goes West," a documentary featured in the 2021 Savannah Jewish Film Festival.
The Joan and Murray Gefen Savannah Jewish Film Festival will be held again in 2021 with a virtual format during Feb. 28-March 11, according to organizers. Since its foundation in 2003, the Savannah Jewish Film Festival has screened many international and independent films that otherwise would never have been shown in the Hostess City, according to the organizers' Feb. 4 announcement. From comedies to poignant dramas and documentaries, each film promotes and celebrates the diverse Jewish history, culture and experience. With a collaboration with the Charleston Jewish Film Festival, organizers are able to bring the Savannah Jewish Community six acclaimed Jewish films and six programs to go along with those films. This year’s films will be available to screen at viewers' homes for 72 hours before its related program. Programs include the directors or actors from the films or distinguished scholars to speak on the topic of the film. The festival will open Feb. 28 at 7 p.m., with highlights including the opening night film, “Kiss Me Kosher.” This is a subversive love story between clashing cultures and families, about two generations of Israeli women falling for a German woman and a Palestinian man. Another highlight includes an afternoon opportunity to view four student shorts produced by incredibly talented students from the Sam Spiegel Film School in Jerusalem. A panel discussion features the Israeli students that created the films. Durng Food for Thought on Mar. 4, viewers can watch “Commandment 613,” a film about Rabbi Kevin Hale, who joyfully practices the sacred craft of Torah restoration, bringing new life to scrolls saved during the Holocaust. Rabbi Hale, who was the associate sofer for Savannah's Congregation Agudath Achim when they had their Czech scroll restored. Other films on the program include the documentaries "Shared Legacies" - about the friendship and coalition between Jewish and African-American communities during the 1960s civil rights movement - and "The Rabbi Goes West," about a rabbi who moves from Brooklyn to Bozeman, Montana to bring traditional Judaism to the American West. Organizers encourage viewers to become a “Friend of the Festival” to help support the Savannah Jewish Film Festival and other cultural programs. Visit savj.org/film-festival for more program details and festival information.