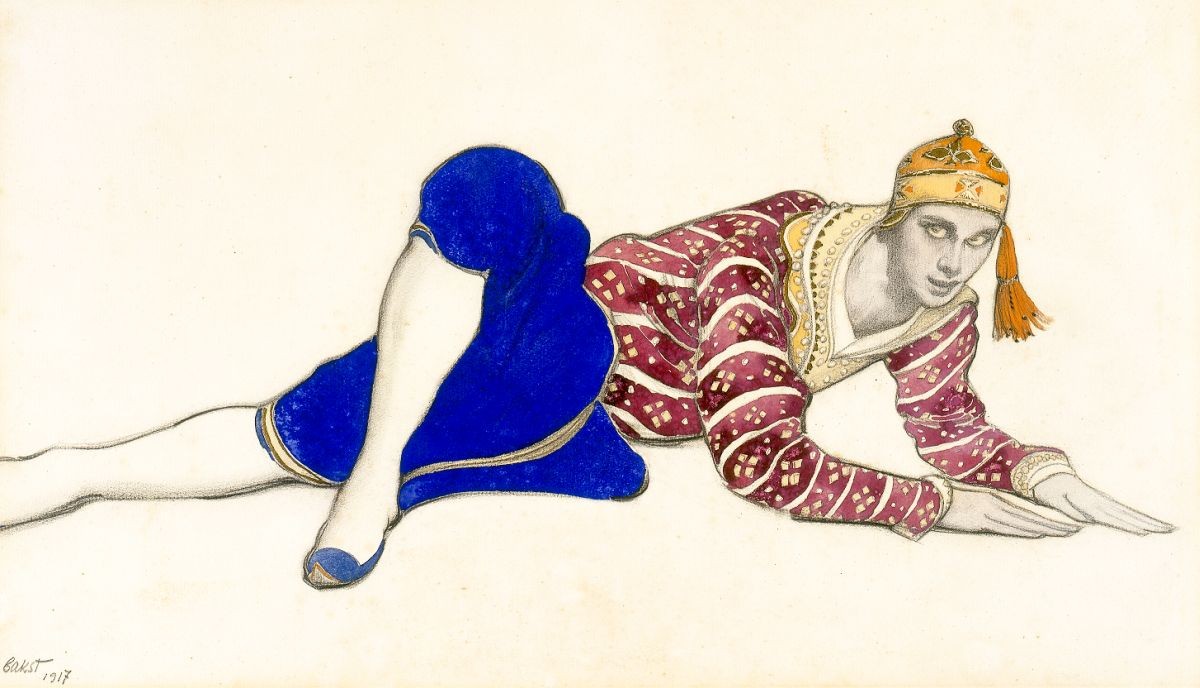 Virtual opening lecture March 4, 6 p.m. via Zoom (event postponed due to weather emergency) Telfair Museums presents a virtual lecture by R. Scott Blackshire, Ph.D., curator of the Tobin Collection of Theatre Arts at the McNay Art Museum in San Antonio, Texas. This lecture is sponsored by the Telfair Academy Guild. Register in advance at telfair.org. Virtual open house for educators Feb. 24, 4 p.m. via Zoom Telfair Museums’ education staff will offer a preview of the exhibition and a virtual walk-through of the gallery. An educator guide and passes to view the exhibition at the Jepson Center will be available to all participating educators. Register online at telfair.org. Registration will open closer to the event date. Free family weekend April 16-18 Savannah-area residents are invited to visit the Jepson Center free of charge for three days, including access to the Picasso to Hockney: Modern Art on Stage exhibition. Displays of theater arts and fashion design by local students will be featured every afternoon of the free family weekend.
Art truly comes alive when combined across its multiple forms, whether it be drawing and fashion or painting and theater. The new collaborative exhibition debuting at Savannah’s Telfair Museum of Art encapsulates the pairing of artists to show art enthusiasts the dramatic magnificence of alliances between creative minds. Opening to the public on Feb. 19 at Savannah’s Jepson Center, Picasso to Hockney: Modern Art on Stage is a traveling exhibition considering modern artistic practice from the late 19th century through the 21st century, focusing on how visual artists innovate and experiment with theater arts, said Erin Dunn, associate curator of Modern and Contemporary Art with Telfair Museums. “Telfair Museums wanted to host this exhibition because we know Savannah is bursting with hardworking arts organizations that promote the thesis of the show − partnerships and interdisciplinary practice between the theater arts and visual design,” Dunn said. The exhibition features 85 works by 30 artists, with names familiar to art fans – including Pablo Picasso, David Hockney, Henri Matisse, Louise Nevelson, and Joan Miró. Their pieces on display were envisioned and executed in collaboration with the creators of varied dramatic works, often in different formats than what these artists are typically known for.
click to enlarge 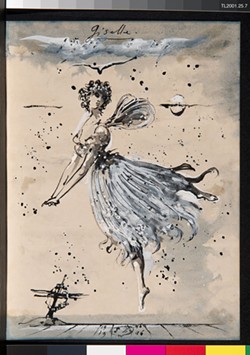 Photo courtesy of Telfair Museums
Costume design for Giselle, Act II, in Giselle’ by Eugene Berman.
The exhibition was organized for the McNay Art Museum in San Antonio, Texas, and premiered there before going on display at Florida’s MFA St. Petersburg and the Dayton Art Institute in Ohio prior to its showcasing here at the Telfair Museum of Art. “Savannah is such a culturally invested town, a culturally interesting town, and with so many theater productions,” Dunn said. “We feel like this show just kind of enhances and builds on the creative community that we have here.” The works include drawings, paintings, costumes, books, and set designs from artists spanning more than 100 years of creative production. “It’s not just 2D works on a wall, but really a 3D exhibition that you can walk around and see,” Dunn said. Guests can view designs on paper made by featured artists, and then see the transformation to a real-life costume, Dunn said.

“Telfair Museums wanted to host this exhibition because we know Savannah is bursting with hardworking arts organizations that promote the thesis of the show − partnerships and interdisciplinary practice between the theater arts and visual design.” - Erin Dunn, associate curator of Modern and Contemporary Art with Telfair Museums.

Many pieces in the exhibition were created for the Ballets Russes, an itinerant ballet company based in Paris that performed between 1909 and 1929 throughout Europe and on tours to North and South America. “It’s a really exciting way to see how artists have collaborated with other art forms, including literature, theater, and opera,” she said. “It will be a lot of costume designs and set designs, as well as some actual costumes themselves. I think those will be really exciting forms for people to see.” For this reason, the exhibition appeals art lovers of all mediums, from fashion designers, graphic designers, and set designers to writers, dancers, choreographers, sculptors, and musicians. “It’s an exhibition for everyone,” Dunn said. “It has a populist appeal, really graphically interesting and beautiful works.”
click to enlarge 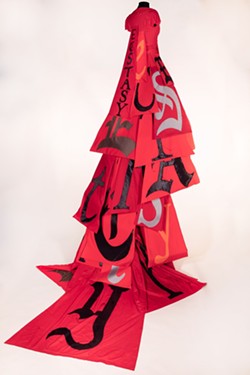 Photo courtesy of Telfair Museums
‘Red Ecstasy Dress from Divide Light’ by Lesley Dill.
Visitors get to see their favorite painters and sculptors in a new light while seeing how they worked with other creators and collaborators through different sections of the exhibition, Dunn said. Picasso to Hockney: Modern Art on Stage was organized by three curators affiliated with the Tobin Collection of Theatre Arts and the Tobin Theatre Arts Fund: curators R. Scott Blackshire and Jody Blake, and assistant curator Timothy James Retzloff. The Tobin Collection of Theatre Arts was derived from collector Robert Tobin, who acquired a love of theater from his mother, Margaret Batts Tobin, who was well-known and respected in the art world for her service to the McNay Art Museum. The entire collection begins from the 1500s to the modern day, and continues to grow. In addition to learning interesting details about the featured artists, exhibition viewers can dive into the history and context of their times, Dunn said. She explained how the Industrial Revolution had people venturing into cities looking for entertainment, which resulted in a desire for more theater, ballet, and other performances. “The artists really jump on board and make these really experimental and exciting productions,” Dunn said. A fan of Picasso’s work may not have ever known that he worked with composers like Erik Satie to create theater productions, Dunn said. The exhibition is meant to dispel notions of isolated studio practice. “It is artists inspiring artists,” Dunn said. “They weren’t working by themselves in the studio, but working together to produce something for people to consume at the time.” Dunn said the exhibition is also a chance for people to learn about artists they may not be as familiar with, like Natalia Goncharova, who lived from 1881 to 1962. She was a Russian-born artist who studied painting, sculpting, and architecture at the Moscow School of Painting, but after meeting her partner − Russian artist Mikhail Larionov, who is also represented in the exhibition − she focused solely on painting. Goncharova was asked by Ballets Russes founder Serge Diaghilev to design sets and costumes for the 1914 production of “Le Coq d’Or” (“The Golden Cockerel”), so she incorporated her most recognizable floral and other Slavic motifs into the production. In 1916, she created numerous paintings depicting Spanish women dancing in traditional flamenco dresses, mantillas, and fans. Dunn said the exhibition will feature several costumes derived from the works of American artist Robert Indiana, also known as Robert Clark. Indiana, who passed away in 2018, played a central role in the development of assemblage art, hard-edge painting, and pop art. His “LOVE” print, created in 1965, was the basis for his LOVE sculpture that inspired the widely distributed 1973 U.S. Postal Service “LOVE” stamp. He is also known as a prolific painter and costume designer. This exhibition is the first that Telfair is holding in their large Jepson Center gallery space since the start of the pandemic last year. A series of special events affiliated with the Picasso to Hockney exhibit will be held both virtually and in-person. The exhibit will remain open to in-person visitors through May 31, with the permanent collection and special exhibitions also available to be viewed with the museum’s exhibition guides.
click to enlarge 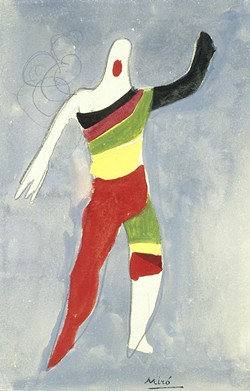 Photo courtesy of Telfair Museums
Costume design for a Spinning Top in Jeux d’Enfants’ by Joan Miró.
The Telfair Museum of Art is taking precautions to prevent the spread of COVID-19 among exhibition-goers by asking that guests wear a face mask and practice social distancing while visiting. Also, tours will not be held at the museum, but all exhibition guides are available online. “We’re really excited to offer viewers something new to see,” Dunn said. Picasso to Hockney: Modern Art on Stage is on view during Feb. 19 through May 31 at the Telfair Museums’ Jepson Center (207 W. York St., Savannah). Visit telfair.org for information on the exhibition and the museum.