WE CAUGHT UP with The Walking Dead star Norman Reedus on making the most of his Savannah visits, modeling with that famous mop, his real-life penchant for crossbows, and why his character, the fearless Daryl, is such a fan favorite. 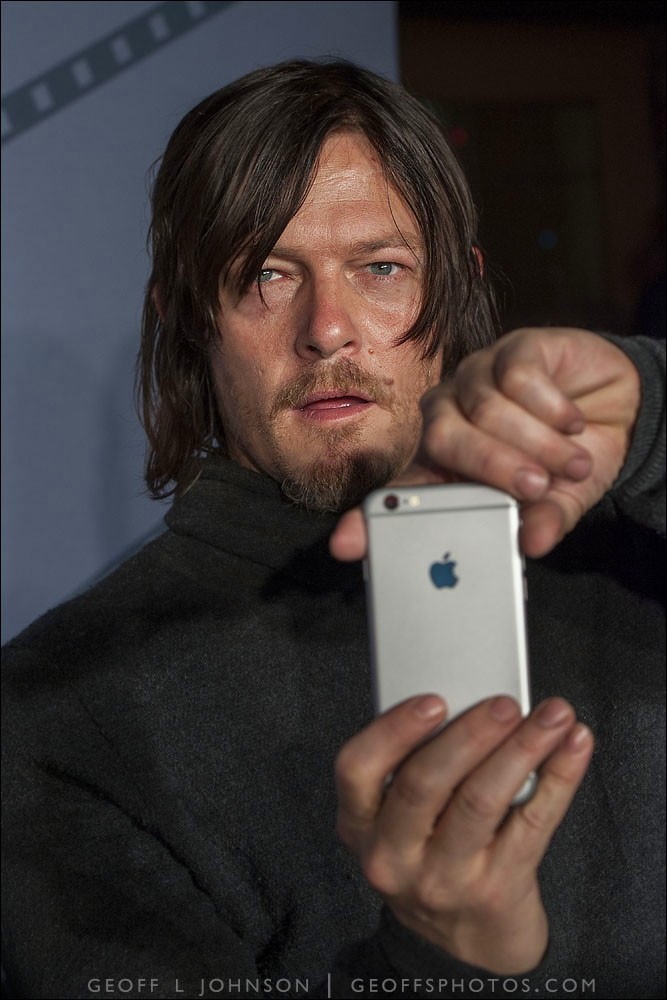 Geoff L. Johnson
Norman Reedus turns the tables on photographers on the red carpet in front of Trustees Theater

You’re back in Savannah again! I know you’ve mentioned The Pink House; is there anywhere else you like to stop by while you’re here?

Norman Reedus: He’s honest. He wears his heart on his sleeve and he means what he says. You’re watching this guy who’s very childlike in a lot of ways slowly become the man that he would’ve loved to be if this didn’t all go down. And this probably wouldn’t have ever happened, you know? And this backdrop sort of gave him an opportunity to discover himself, and it’s interesting to watch.

Is there anything in particular you feel you’ve learned from the character?

Norman Reedus: Oh, tons. It’s like any other job. If you love your job, going to work every day is fun. You know what I mean? And that’s rare. My whole outlook on everything has changed. I’m having a great time.

You have an interesting angle too, because, unlike other characters, Daryl’s not in the comics.

Does that allow you a kind of freedom in how to explore that character? Is there an unpredictability since you don’t necessarily know what his plotline might be?

Norman Reedus: A little bit of all of it, you know. They don’t stick exactly to the comic books. But it might have been harder if there was a comic version of me out there that I was trying to emulate that, you know what I mean? It would be weirder, I think. It’s nice to have the door wide open. I like it.

I understand you’ve become taken with the crossbow since you’ve been acting with it—outside of filming, too, yeah?

Norman Reedus: Well, I steal them every year, so. In New York, I have about five. My house in Georgia, I have one of those, I have a compound bow, I have a whole bunch of stuff. Yeah, I’m pretty good. The trees in my backyard all have bolts stuck in them.

Do you practice when it’s not season or filming?

Norman Reedus: Yeah, I’ll have a coffee and I’ll just start shooting things sometimes in the morning, getting ready to go to work.

This was a record-breaking premiere for Season 5. It was interesting timing with the news—Ebola, terrorism—do you think there’s a reason that The Walking Dead is speaking to people? It’s kind of survivalist…it’s kind of a fearful time.

Norman Reedus: Yeah, but I mean, it’s our fifth season, so it was super-successful right off the bat. It is a weird time, though. Yeah, it’s pretty freaky, the coincidences of those things. But I don’t know. I think there’s always going to be one of those coincidences—every year, there’s going to be something. Hopefully this Ebola thing will slowly go and our show will stay.

Slightly more lighthearted note—you also have a modeling career. What’s that like, going from being covered in blood and dirt to that…do you treat them separately?

Norman Reedus: Are you talking about the GQ covers? They get actors to do those. I don’t think there’s really models that do those, but I’ve done a few campaigns. I’ve done Prada, Dell’Acqua…what else…couple other things. But you know, I’m short, and I never sleep, and I have long, wild, animal hair going on. I don’t know, they just put you in skinny jeans and twelve sweaters and a bunch of people yank on your clothes and you just try to look natural. (Laughs). I’m not very good at it. But it’s fun. It was cool to say that I did that ‘cause that’s a thing, that’s a big deal.

Is it a different approach than acting for you?

Norman Reedus: Oh yeah, you’re just having your picture taken. One, you know there’s a camera there, the other one, you’re trying to forget the camera’s there. It’s totally different.

Anything you’d like people to know while you’re in Savannah?