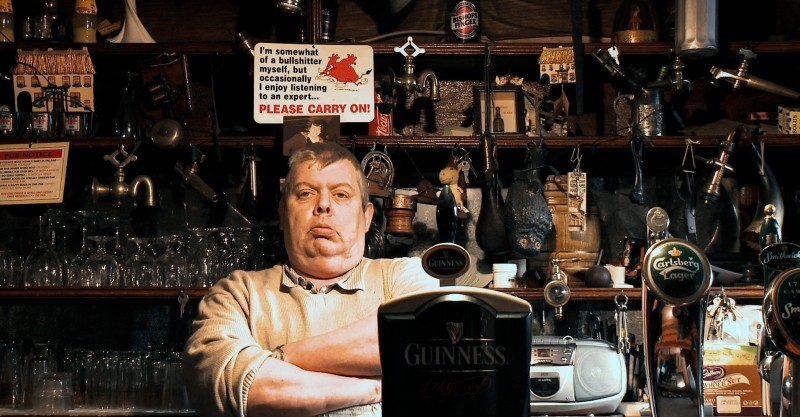 PERHAPS THE most unique new twist at this year's Savannah Film Festival is the "World Shorts" series, this year focusing on Ireland and Irish heritage.

It is, of course, a perfect fit for Savannah’s own heritage.

The flagship entry in the series, though, isn’t a short at all. It’s the altogether charming full-length documentary The Irish Pub, in which several very individualistic and hilariously funny pub owners from all corners of Ireland talk about what makes an Irish pub particularly Irish, the importance of the pub to Irish society, and the challenges facing the institution in a modern age.

We talked to affable director/producer Alex Fegan a few days ago. He’ll attend the screenings here, and you can probably buy him a pint later on at Kevin Barry’s, where we hear the Irish-themed filmmakers are gathering after their screenings.

Alex Fegan: I was interested in documenting the third-generation type pub. Often by the fourth or fifth generation, the kids become well educated and go off and become a doctor or whatever, and sell or close the pub.

Once that family line breaks, often that spells danger. Because what’s required to run a small business is a level of passion that sometimes goes beyond proper commercial sense.

We found that having a family member involved in the pub hugely helps its existence moving forward as other family members go off and do other things.

Is that mostly why they say the Irish pub is a dying institution?

Alex Fegan: Unfortunately in Ireland as elsewhere, we're heading into a situation now where more and more aspects of life are homogenized. The Starbuckization of society is killing the pub. The pub is almost a last stand, where the person behind the bar has the same name as what's over the door.

And TV coming into pubs is becoming a bit of a problem. Anytime you’ve got a TV in the room, you’re looking at it over the shoulder of the person in front of you you’re talking to, and you’re not doing either thing well.

In a really good third-generation Irish pub, TV is a big no-go. Having said that, you might have a TV on if Ireland were playing a rugby match or something.

The rest of the time the general philosophy is to switch it off and allow people to talk. It’s about conversation—not so much about getting drunk. It’s about the banter.

People unfortunately stereotype the Irish, but in many pubs I’ve visited around Ireland sometimes you’ll see people just having a cup of tea and wanting to have a chat. And they want to know the person behind the bar is the owner.

The Dublin pub owners you interview have a sort of swagger. They seem to think they have the most authentic pubs, but would you agree the country pubs you went to are probably a lot more authentic?

Alex Fegan: Well, in Dublin they have a different sort of wit. It's more of a town mouse versus country mouse thing. The Dublin pubs are very much famous, and rightly so, but there is a difference in that the Dublin pubs are more traditionally Victorian pubs, with a big connection to the literary history of that period.

There’s definitely a greater sense of history connected with Dublin pubs. Rather than living day by day, the owners themselves might see those pubs more as a museum and themselves as curators—and I don’t mean that in a bad way at all.

In country pubs it’s still the case that you get people of many different age groups together interacting in one place. Not so much in Dublin.

In the country pubs you have that sort of thing where a young fella in his early 20s would be easily talking to someone in his 80s. Of course he might know him, that might be a friend’s grandfather.

Did any pub owners just not want to be in the film, and turn you down?

Alex Fegan: Only one said no. He said, "I want to but I'm too shy." My only criteria going into this was that the pub had to be at least three generations in the same family, and the owners themselves had to stand for the interview—no managers or what have you.

They’re usually filmed behind the bar mostly because that’s where they’re most comfortable. The framing and composition of the shots comes back to the idea of just holding a mirror up to the pub. I wanted people to be able to see the background as clear as the person in the foreground, and not just have your standard talking head.

I read an article about the Irish bust in the global recession that said the Irish themselves were pretty fatalistic about it. They didn’t get very worked up nor did they blame anyone but themselves for the collapse. Is that true, and do you find that reaction particularly Irish?

Alex Fegan: Well, since 2008 there hasn't been one protest in Ireland. There's not many countries that can say that. In Ireland we had everybody jumping on the bandwagon when things were good. We should have really realized what was happening. There is this attitude in Ireland that things come, things go, and they come back again.

The Irish pub might actually have a part to play in that. In Ireland the proximity of the individual to the politician is quite close. I’d say there’s a maximum of three degrees of separation. So there’s not this sense of separation between the people and the politicians.

Ireland is actually a very cosmopolitan country these days. So with the EU you will have wine imported, and craft beers from Germany or Belgium. That gives people many more options than in the past.

But also there’s the fact that if anything a lot of Europeans who come to Ireland come specifically to enjoy the Irish pub. Whatever it takes to keep it alive!

Speaking of Lucas Theatre For The Arts