"Reinterpreting the Sound of Blackness" remains at the Jepson through May 6. On Feb. 8, the Jepson presents its W.W. Law Lecture, a conversation between Benjamin and Reese, at 6 p.m. Lecture is free and open to the public.

YOU’LL HEAR Paul Stephen Benjamin’s exhibition before you see it.

As you walk up to the gallery hosting “Reinterpreting the Sound of Blackness,” you’ll hear Aretha Franklin’s voice through the walls. The sound comes from Benjamin’s video installation, “God Bless America,” a wall of 90s-era TVs.

A similar video wall further back in the gallery, “Summer Breeze,” features clips of Billie Holiday and Jill Scott’s performances of “Strange Fruit” surrounded by video of a young girl on a tree swing, in a heartbreaking echo of the song title’s original reference.

These two video projects are emotionally impactful and force us to think about race relations in America. Benjamin presents video from two different eras to focus on the time between. What has changed between Holiday’s 1939 performance and Scott’s 2015 rendition?

“What we’re doing in this show is talking about how context changes over time,” explains Rachel Reese, associate curator of modern and contemporary art.

“There are a lot of connections between the Civil Rights movement and the Black Lives Matter movement and how it’s been recycled and become relevant again, unfortunately.”

Benjamin’s work is focused on the concept of the sound of black.

“I use video stills and sound pieces based off the premise, if the color black had a sound, what would it sound like?” says Benjamin.

Benjamin plays all of his videos on old television sets intentionally.

“Repurposing old TVs represents a time frame,” he says. “Some are from the early 2000s and some are from the late 90s, when flat screens first started coming out. The technology of it is important, but also a rectangular screen is how we receive information now.”

“He uses analog TVs, like tube TVs and old technology, and he exposes all the cords and DVD players on purpose to not hide anything, as a metaphor,” explains Reese. 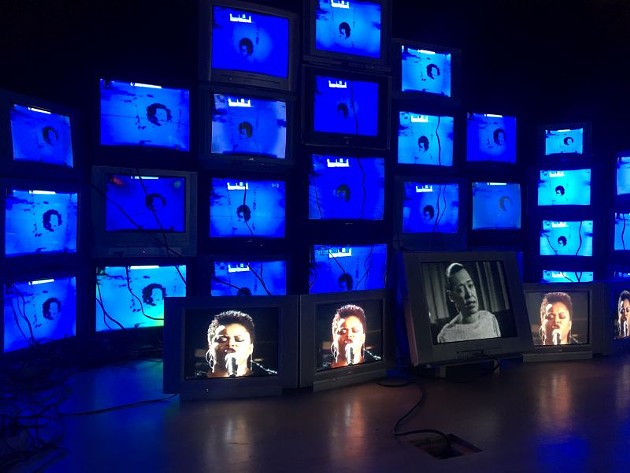 The exhibition also includes a wall of portraits of black males, barely visible in the dim light of the gallery.

“A lot of Paul’s work is monolithic, black on black, but it’s the nuance of getting up close to something, whether it’s music lyrics or getting close to a photograph and letting something reveal itself to you,” Reese notes. “He’s very poetic in that way.”

However, one of the most compelling parts of the exhibition is the wall. Benjamin painted the walls of the gallery five different shades of commercially-available black paint.

“I’ve been working with the color black as a monochromatic approach to my work for fourteen-plus years,” Benjamin explains. “I use black paint as a means of uniformity, and I’m interested in the variations and names associated with black by a commercial entity. When they’re presented collectively, they’re even more important.”

The five colors of black on the wall are Pure Black, Totally Black, New Black, Very Black, and Black Beauty. By thinking about the names that we use for black objects, we also think about the way we discuss African Americans. How are black people presented in media and pop culture? What’s the power of the words we use?

“I think there are so many facets to the color black when dealing with blackness and race in general,” continues Benjamin. “There’s no one way to describe a people—that’s becoming more and more evident.”

“Reinterpreting the Sound of Blackness” should be at the top of your list of exhibitions to see, and not just for the powerful message it sends.

“Even if someone doesn’t want to dive hyper-deep into the history of these pieces, the visual and sound will draw you in because the sound of these video installations is very rhythmic,” Reese says. “You can start to pick up on all the layers. It’s just visually beautiful.”