SCAD and the Fab 5 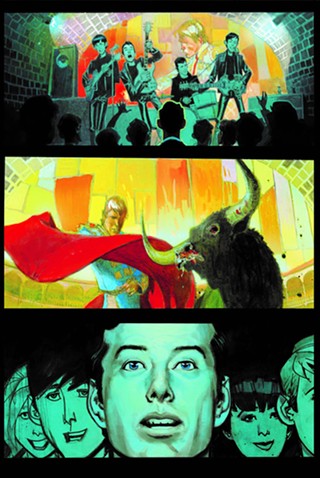 Dark Horse
A page from "The Fifth Beatle." In the early '60s, Brian Epstein's other obsession was bullfighting (and bullfighters).

For most of the past month, The Fifth Beatle, a vividly-illustrated graphic novel chronicling the rise and fall of star-crossed 1960s pop manager Brian Epstein, has sat at the top of the New York Times chart for Hardcover Graphic Books.

The closest competition includes graphic novel naturals like Batman and The Walking Dead.

The Fifth Beatle was written by Tony-winning Broadway producer Vivek Tiwary, who is currently adapting his Epstein story into a feature film.

Andrew Robinson drew and painted the 120-page book, which follows Epstein's discovery of the raw young Beatles in a dingy Liverpool club, through their meteoric ascent to the mountaintop (through his machinations and tireless devotion to them), to his tragic death from an overdose of prescription medication at the age of 32.

"It's a very big story, but it's also a little story," says Robinson, whose portfolio includes Dusty Star, and covers for the likes of Superman, Starman, Hawkman, The JSA and King Conan.

"And the little story is very close to me. I've lost some really good friends who were in their 30s. Actually, three days before I read the script a good friend of mine passed away. So I had this emotional charge. I could take that pain and sadness, and put it into those parts of the story where I needed that emotion in there. I just felt close to Brian: I kind of understood some things that he was going through."

Much of the book is focused on Epstein's homosexuality. He wasn't just closeted, he was terrified of the world finding out (although his beloved Beatles knew, and accepted him). In those days, homosexuality was a crime in Great Britain, punishable by prison.

Just before his death in 1967, Epstein had paid off a brutish former lover who'd threatened to go public with the great impresario's secret.

All of this was new to the 43-year-old Robinson, who was born and raised in St. Augustine, Florida, on his father's potato farm.

Robinson had been a comic book geek until the age of 13, when skateboards and girls took over. But his love of drawing, and innate talent for characterization, drew him in 1989 to the nascent Savannah College of Art and Design. "The school was a lot smaller, and it seemed a lot more bohemian then," Robinson recalls. "A bit more artsy, you know — a lot of patchouli and hippies, that kind of thing."

Those were also the days when SCAD's historic preservation — buying up empty buildings and refurbishing them into thriving college facilities — was beginning to revitalize the largely shuttered downtown area.

Following a break in his junior year — he served in the Army Reserves during Operation Desert Storm — Robinson graduated from SCAD in 1993. "There wasn't a major for sequential art at that time, so I was majoring in illustration," he says. "The last year of school, I had a few electives just to finish out my program, and so I took Comic Book 1 and 2. Those were the only classes in sequential art that the school offered at the time."

Through a school friend who was already working professionally with Dark Horse Comics, Robinson — who'd married and became a father around the same time he graduated — began to find employment.

"I just wanted to work," he says. "I wasn't really picky. Comics were really changing at that time. There was more of a variety of stories. Of course, now it's really blown up to a huge array of genres and stuff. But there was plenty of work there. It was also a chance to use your imagination and create your own stuff.

"And with the gaming stuff there was more than just pen and ink work. You could paint. Eventually I got into painting covers at DC Comics."

Robinson and his family live in Southern California now. That's where he was when he was offered The Fifth Beatle. Vivek Tiwary's agent knew Robinson's agent.

"Working with Andrew Robinson was a gift," Tiwary told us in an e-mail this week. "His talent speaks for itself — the art is simply breathtaking. And behind the scenes, Andrew works with a meticulous passion for research and detail that's invaluable for a period piece like The Fifth Beatle.

"Moreover, his ability to creative collaborate was a joy."

Robinson agrees that while it was Tiwary's project, their work was indeed collaborative. "The dialogue was really rock solid," he enthuses. "And that's pretty much what I went by. But it came to me to decide how many panels on a page, what should be a double page spread, what should be really big and what should be small. I would choose camera angles and shots, and really took control of the book visually.

"We still worked together, where I'd do a breakdown and show Vivek what I had planned for the page. And nine times out of 10, he was on board with what I wanted to do."

Of course, the Beatles' story is one of the most frequently-told in contemporary showbiz. From the start, Robinson wanted to bring a fresh approach to its depiction.

"There are two processes you could use for the story," he explains. "One being you just copy famous photographs, to get that realistic look of the Beatles. But then you're limited to other people's photographs, and that's stuff that everybody's already seen.

"The other mode is to try to find your own way of representing these icons of pop culture. And that's a bit more freeing.

"It was a struggle, and there were certain pages where I just had to re-draw their faces, erase and draw and erase and draw, till I finally got something that was right. And fit my visual language."