The SCAD Savannah Film Festival returned for the 24th year on Oc. 23, celebrating the achievements of accomplished and new filmmakers.

The day was loaded with screenings and workshops for festival-goers to experience. The evening was topped off with the stars walking the blue carpet.

His exhibition “People Are People” opened at the SCAD Museum of Art on the 22nd. This is his first solo museum exhibition and it honors his captivating contributions to fashion.

The honoree for the evening was award-winning actor and filmmaker Kenneth Branagh. He was the recipient of this year’s film festival lifetime achievement award recognizing his body of impressive work in various aspects of the film and television industry. Branagh has over 60 film and television credits on his resume.

His film “Belfast” was screened on Saturday night. Before the screening a Branagh received his award with a standing ovation from the crowd.

“I can make as many films as I like but if there isn’t an audience, it’s not worth anything. You’ll see in the film you’re about to see that there’s a love of what’s happening right now, which is still pretty unusual to see a large group of people in a movie theater together looking at a big screen. It’s a miracle and because you are coming back to support this film festival, you inspire me,” said Branagh as he accepted his award.

Branagh served as writer, producer and director on Belfast which is about a nine-year-old boy who must chart a path toward adulthood through a world that has suddenly turned upside down. A film that he describes in aspects as a reflection of his life with parallels to current day situations of families getting through the pandemic.

“Writing this was personal, making it was little more a process of giving it away to the actors and to our crew. A lot of actors improvised and did beautiful work. The collaborators made things a little different, so it wasn’t a literal recreation of my entire childhood,” said Branagh.

“It was sort of an emotional experience writing it. I chose to do it at this time because we were living through this period of uncertainty and being unsettled in the way the pandemic had its effect on everybody,” said Branagh. “The story of the film is about a period of deep uncertainty with my family. When something happened when I was nine years old, when our world was turned entirely upside down in the north of Ireland, what was a peaceful environment? A very happy environment turned into a very, very dangerous one.”

Branagh expressed it was a very emotional experience watching the film as he had to look into understanding his family and a big moment of change in their life. He is pleased that people are watching the film and recognizing how some changes applies to their own lives. Belfast will be released in the US on November 12 and it is already generating Oscar buzz.

Dune was screened on the 23rd at 2 p.m. at the Trustees Theater and Mowat and Green participated in a Q & A after the screening.

Mowat and Green both were thrilled to be at the film festival and to experience their work on the big screen because over the past year covid had limited most releases to streaming platforms and other mediums.

“This makes me very happy and especially for young people, the students, to be able to get back into the world and experience cinema, that’s really important,” said Mowat.

Dune, directed by Denis Villeneuve, tells the story of Paul Atreides, a brilliant and gifted young man born into a great destiny beyond his understanding who must travel to the most dangerous planet in the universe to ensure the future of his family and his people.

“It’s a character driven movie. It’s also an action driven movie, and I think sound in particular, can be one of those things that really distracts people if it’s too flashy and gaudy and outlandish. So, it’s all about trying to keep a sense of realism,” said Green.

“It’s very interesting how many sorts of parallel experiences we have and very separate things that we do in one visual, one hearing and sound but they are all very grounded in reality,” said Mowat.

Dune was released in the U.S. on Oct. 22. The SCAD Savannah Film Festival continues through Oct. 30. Find the fill schedule and more at filmfest.scad.edu 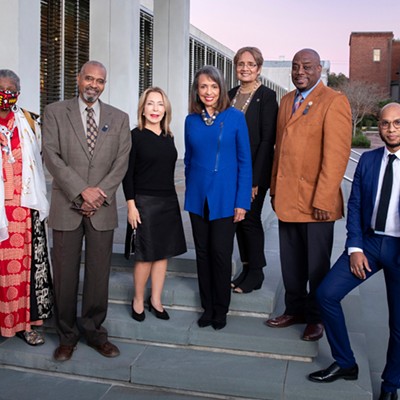