HEY, how you liking that nifty new phone? And having lights on after the sun sets? How about the lack of botulism in your burger?

What about SPF 50 sunscreen and airplanes and food-pollinating honeybees and bridges that don’t fall apart?

Fun, helpful stuff, right? It may come as a shock to some, but these modern essentials were not in fact developed by alien wizards or handed out by Jesus riding a dinosaur.

Nope, pretty much everything us hairless, flat-toothed humans enjoy and rely on not to die on a daily basis has been brought to us by scientists, who are actually just other humans with advanced academic degrees and cool white lab coats. 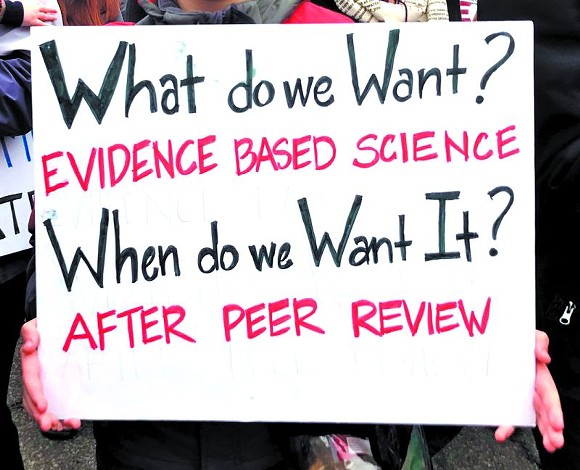 A sign seen at the Women’s March on Washington in January.

In addition to asking Big Questions, scientists also have the annoying habit of testing the same theory over and over again, sometimes for years, to make sure what they say is true, and they really don’t like it when people ignore their work or just make stuff up.

Right now, scientists and the people who value them are hopping mad, on account of our country’s centuries-long tradition evidence-based policymaking exploding like a third grader’s baking soda volcano.

Our fact-averse leadership has already crippled funding for the Environmental Protection Agency and the NOAA’s ocean research, tossing out definitive data on climate change and rising sea levels into our groundwater-leaching landfills.

Money for clean energy research, NASA missions and the examination of new treatments for widespread diseases like Alzheimer’s, cancer and diabetes is also dust in the unharnessed wind.

Considering the emphasis on objectivity and factual rigor, most scientists tend to be apolitical when it comes to their methods (except for political scientists, who may be responsible for this gawdamn mess in the first place.)

But like other groups marginalized by the monstrous ignoramuses in charge, they’re taking their resistance to the streets with the March for Science this Saturday, April 22, America’s official Earth Day celebration.

Hundreds of thousands of are expected to descend upon Washington, DC and 425+ satellite cities, bearing nerdriffic signs like “If You’re Not Part of the Solution, You’re Part of the Precipitate” and “Trump: No Science, No Rogaine, No Hair.”

Savannah’s science community will be out in full frictional force at Forsyth Park, led by the coastal advocates of One Hundred Miles and Savannah Riverkeeper. (No word on any official headgear à la the Women’s March’s pink pussyhats, but knitted brain caps and double-helix headbands are all over Etsy.)

“People say it’s not the government’s business to be funding these things with public dollars, but science benefits everyone because it helps us understand the world around us,” sighs Dr. Delana A. Gajdosik-Nivens, Professor of Chemistry and Dean of Science and Technology at Armstrong State University.

“If we cut the public funding for basic research, it’s going to be very difficult to maintain the standards of knowledge in our society.”

The danger isn’t only a bunch of dumb bunnies who hate polar bears and think the moon is made of cheese. Science is already exploited as a pay-to-play model as private funders pick and choose studies based on what outcome they want to see.

The total co-option of objective science by the private, corporate sector means an economic agenda will be attached to every experiment—a terrifying thought when it comes to things like your ADD medication and those gross GMO fish strawberries pushed out to market before they’ve been tested properly. It also defeats the purpose of experimentation:

“The goal of science isn’t to make money, it’s to learn. Science takes time, it’s tedious,” explains Gajdosik-Nivens, who cites colleagues who have been changing out a particular bacteria’s DNA one amino acid at a time for five years.

If they come at all, useful applications often come decades down the laboratory line. “I mean, the polymerase chain reaction that’s used on crime scene DNA wasn’t just dreamt up in a day,” she scoffs.

That backlog of 175,000 untested rape kits collected from victims—of which there are more than 4,400 in Georgia? Unlikely to ever see a courtroom now, thanks to this administration’s intersectional assault on women and science.

Naturally, the environment is the front line of the battle. Saturday’s march was first spearheaded by a group of earth scientists appalled by America’s unfortunate slither backwards from the global push to fight planetary meltdown, and local ecologists are feeling the burn.

“The entire world is on board with climate change except for the party in power. Obama started late, but he had things in place that were going to help,” mourns Randy Tate, an evolutionary biologist who currently coordinates the local chapter of the Longleaf Alliance.

“Now we’re looking to the Chinese for leadership.”

Also frustrating is that the study of other species—except for the ones we eat and wear—will become a low research priority, even if their existence is to our advantage. The Caretta Research Project on Wassaw Island focuses its work on the breeding habits of the marvelous loggerhead sea turtle and has found further reaching perks of the gentle giants’ life cycles.

Science educators already have a hard time keeping young minds engaged, but the active fight against actual data is wearing. Effingham High biology teacher Lauren Stallard says she struggles daily with trying to teach the imminent impacts of fossil fuels while even some of her colleagues still don’t believe in climate change, “or evolution, for that matter.”

“I feel like I’m becoming an alarmist, you know, ‘one of those people,’” laughs Stallard. “But when I tell my students that carbon dioxide levels have now surpassed four hundred parts per million and they just shrug, it can be hard.”

Teenage apathy aside, what the war on science really does is hurt the children. It already seems like a long time ago that words like “innovation,” “globally competitive” and “tech-based economy” were bandied about by a government willing to invest in its future.

After a decade of pushing STEM education and extra effort to draw girls and minorities into science-related fields, the budget cuts and backwards attitudes could mean a whole generation robbed of the job prospects they’ve been promised.

“My biggest concern is that I don’t want the younger population to get discouraged or feel like their views are invalid because of the national commentary,” says Alice Kohler, a STEM Academy teacher who says science research skills are valuable no matter what the career path.

“We need to keep fostering curiosity about the world, to encourage students to collect information and analyze data properly. Also, to learn from failure. That’s a huge part of what science is. It’s not supposed to work the first time.”

That’s a maxim to remember as we keep on marching for truth and justice. It might not work the first time, but all those tenacious steps—of the mad scientists, the resistors, the folks who spoke up about those ignored rape kits at #ICantKeepQuietDay earlier this month, and the Tax Day Rally protestors who stood in front of climate change denier Rep. Buddy Carter’s office this weekend—are adding up to a force that can topple the false pretense and gasbag reality denial.

After all, nature abhors a vacuum, and we’ve gotthe law of gravity on our side.