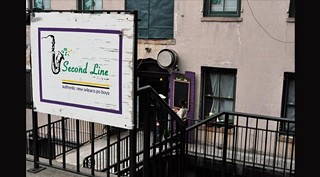 I’ve been to New Orleans twice in the past year. The best Po’ Boy sandwich I’ve had in that time was in...Savannah.

In post–Katrina NOLA, the truly good eats and the real characters of the Crescent City’s culinary scene have moved to the outskirts — off-the-beaten path neighborhoods and nearby towns. The best of the local cuisine has returned to its roots — to the locals.

Yeah, the big boys are still dishing some rock star caliber cuisine, but you know what? It’s still just fried chicken and greens.

The jazz was playing loud on the sound system and the view onto the Savannah river was gray as a thunderstorm passed through. I had barely found the place, nestled into an alley between Jere’s Antiques and Dueling Pianos before the rain drops doused me.

Go down some steps and across a catwalk spanning Factor’s Walk. You’ve arrived at Second Line and you’re about to be indoctrinated with real–deal NOLA Po’ Boys.

The husband and wife owners are Katrina refuges who never went back. You might remember the angst they had getting open — traversing a litany of ordinances and restrictions — far more than they were accustomed to coming from New Orleans.

I’m glad they hung in.

My roast beef Po’ Boy was piping hot, topped with tomato, lettuce and savory, taste bud popping house made gravy. I skipped the mayo, ‘cause I wanted to taste, to bask in, to savor the gravy.

Oh, yeah... that’s the flavor. Even the bread is special, shipped in from Atlanta to mimic as closely as possible the French bread that made NOLA’s Po’ Boy so legendary.

A side cup of red beans and rice was sporting plenty of sausage and mouthful of flavor with each spoonful. I know I’ll be back: A Muffaletta awaits, as does a genuine Debris Po’ Boy (hot roast beef, turkey and ham shavings).

Shrimp Creole and chicken gumbo make regular appearances and the bread pudding sounds like just the ticket to assuage my sweet tooth.

Expect funky, eclectic, and that tinge of Savannah/New Orleans benign decay that turns a stuffy restaurant a comfortable joint. There’s live jazz on Friday nights and a energized bar scene Thursday–Saturday, when hours extend to 3 a.m. Beer and wine only. Of course, Abita is on tap.