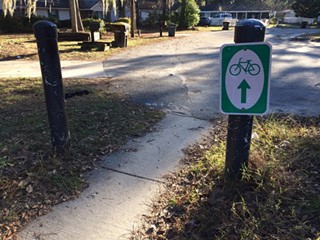 Bikes weren't an afterthought when Southside streets were designed — they weren't even a thought at all.

As we pedaled our bikes on Hodgson Memorial Drive, just south of the Oglethorpe Mall, my friend turned to me and made an important point. "As you can see," he said, "people live here."

His comment was instructive. Those of us who spend most of our time north of DeRenne Avenue may mistakenly regard Savannah's Southside as a monoculture of big box stores, fast food joints, and car dealerships.

Those things are present, of course, but if you look just beyond the shopping centers and office "parks," you'll find apartment complexes and single family homes that aren't always visible from a speeding car, which is the vantage point from which most of us perceive the Southside.

The tens of thousands of people, who live in these residential areas, are within easy walking or biking distance to all sorts of shopping, restaurant and entertainment destinations. Unfortunately, what looks like a short walk on a map can be totally different experience on the ground.

The Southside's major commercial corridors are notoriously unfriendly (and even deadly) to pedestrians and bicyclists. It's too charitable to say that people who walk and ride bikes were an afterthought in the design of these streets. The truth is they weren't even considered at all.

My friend invited me on a Sunday morning bicycle tour of Southside to help me understand the numerous barriers to safe passage with which pedestrians and cyclists must contend. Some of them seem to have been created entirely out of spite.

For instance, he showed me a fence erected between a commercial development and an adjacent neighborhood that forces residents to walk blocks out of the way along a busy street with no sidewalks to reach nearby stores, restaurants and a transit stop. These destinations would be only steps away without the fence blocking the way.

Yet inventive cyclists and pedestrians have learned to hack their environment, discovering tricks to make travel safer and more convenient. My friend recognizes that riding his bike through a parking lot comes with its own share of risks, but finds that it's the best way to navigate a particularly troublesome intersection.

He's also learned which traffic signals can be triggered by a bicycle (Hint: almost none all of them).

People who ride bikes on the Southside and in other unfriendly territories often develop a repertoire of alternate routes that permit them to reach destinations via calmer and slower streets. But there's a tradeoff. The safer way may be circuitous and time consuming.

Consider the official North/South Bikeway route, for example. A cyclist following it from Montgomery Crossroad to its southern terminus near Armstrong Atlantic State University will cross Abercorn twice.

You read that right. Twice.

If you're running late you might be tempted to take a more direct route and take your chances on streets that are engineered to maximize motor vehicle throughput and speed.

These streets are populated with motorists who are also running late and attempting to get a jump on the workday by answering email, making phone calls or eating breakfast behind the wheel. Many are speeding.

That would dissuade most people from riding their bikes to work, if they have a choice in the matter. Many do not.

The good news is we can learn from Southside cyclists and pedestrians and formalize their informal solutions. Examine the shoulders of many roadways and you'll see trails worn in grass and weeds by foot and bicycle traffic. These "desire lines" show the demand for sidewalk and bike paths and where they should be located.

Boundaries between neighborhoods can be made porous, permitting bicycle and pedestrian movement without increasing auto traffic. Simple fixes such as a gate installed in a fence or a couple yards of asphalt can help people safely and conveniently overcome currently impassible divides.

I saw several examples on my Southside tour. More are needed. This is the low hanging fruit.

The real solution, however, is the adoption and implementation of Complete Streets policies to ensure that pedestrians, cyclists and transit riders are accommodated in street improvement or new roadway construction projects. Our citizens deserve transportation options that are safe and convenient, no matter how they move around our city.