BEFORE DECIDING to alter the course of his life, the story of Semaj Clark was all too familiar to everyone who witnesses the reality that surrounds misguided youth.

Now as founder of the FIRE organization, he looks to inspire youth to avoid the same mistakes he made early in life.

FIRE, which stands for forgiveness, introspection, respect, and education, is a program dedicated towards the empowerment of youths of all ages through the teaching of basic life skills that are necessary for success.

On June 27, the upcoming FIRE forum at the First African Baptist Church will provide the first of many opportunities for those youth to lead their own discussions about how to find solutions to the problems that are plaguing their community.

“I’ve been talking to a lot of people and they say that the adults don’t really care about our own perspective. So, I felt like I need to maybe do something for them and let them get a chance to speak,” says Clark.

In addition to discussions about possible solutions to issues plaguing Savannah, there will be also be opportunities to help launch the growth of the program in Savannah. Forms will be presented providing details for student enrollment.

Also, there will be announcements regarding ways to create partnerships and sponsorships that will provide kids involved with even better opportunities to be exposed to different experiences.

“It’s going to offer opportunities like jobs to kids because not everybody has parents that are going to guide them and direct them to do good,” says Clark.

Those youths who have interacted with Clark have been able to connect with him because they realize how similar his past experiences are to their own. 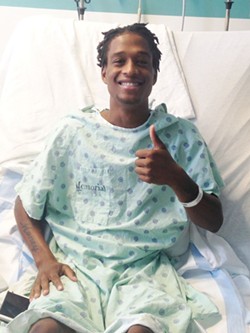 A file shot from last year, soon after Clark's shooting.

“They’ve been telling me stuff that they’ve been going through and I’ve been able to say I’ve been there before.” These past experiences are what have shaped a story defined by initial failures followed by a remarkable redemption.

Semaj was born in Los Angeles to a drug-addicted mother without the presence of a father. These circumstances led to him being placed in foster care where he was subjected to abuse. The combination of these difficulties led towards feelings of bitterness and distrust that fueled his early struggles.

“When there’s so much going on in your life and so many things that you’ve been exposed to it just feels you up with this evil that makes you not care”, he says.

This attitude led to a downward spiral that included being involved with gangsters and an eventual arrest for burglary at age 12. However, it was an experience that was caused by his bad decisions that would serve as the catalyst for the acceptance of change in his life.

“When I was 15 I had got shot and I was like I could have died. That day I told myself that I couldn’t straddle the fence anymore,” Clark says.

Following that, he embraced programs such as BLOOM, or Building a Lifetime of Options and Opportunities for Men, sponsored by the Brotherhood Crusade, which would teach him the values necessary to find success. The commitment members of this program made towards helping him is what inspired Clark to focus on improving his behavior and attitude.

“I pushed them away for a like a year but then I started working with them because they showed that they cared,” he says.

With the support of a group of advisors and mentors, Semaj was able to quickly become a role model for other young people who have shared the same difficulties. His newly found leadership would propel him to yet another life altering experience.

As part of the My Brother’s Keeper initiative, President Obama was visiting the Los Angeles Trade Technical College to recognize organizations impacting the community. As a member of the Brotherhood Crusade, Semaj was among the 11 groups there for the presentation. He was chosen as the representative to meet and shake hands with the president.

“That was the second moment where I decided that I couldn’t be straddling the fence. You can’t shake the president’s hand and then be in jail,” he says.

He used this moment as motivation to continue his pursuit of success. When he reached the age of 18 he had enrolled in college after previously dropping out of high school.

He also began finding success as a public speaker and as an advocate for black male achievement. This journey of success would eventually lead him to Savannah.

Semaj’s group was invited by the Chatham County Juvenile Court to come speak and share their experiences with the troubled youth in the area. He soon fell in love with the environment of acceptance that he felt while visiting.

“The reaction was wonderful. I told them I wanted to stay in Savannah”, he says.

Unfortunately, this would also be the same environment that would once again alter his life. On October 10, 2016, Semaj was permanently paralyzed during a robbery attempt in the Yamacraw public housing project following a community safety forum.

Instead of letting this incident anger him, he used it as motivation to stay in Savannah and help the same youths that injured him.

One person who has witnessed this dedication is Kim Dulek, who has developed a strong relationship with Semaj through her role as the Chief Navigator of Anchor Advocacy and Consulting Group, a business aimed at helping those with disabilities to live independently through community support.

“I was impressed with his energy and drive to move forward with what he was already doing to transform the lives of youth. Instead of being bitter about his injury I was inspired by his energy to turn that around,” says Dulek.

She has also experienced first-hand the dangers present in Savannah.

“Bullets came into my home during a gunfight last march and it brought an awareness to me about the many people dying around Savannah”, says Dulek.

Semaj will continue to fight this battle against violence and use FIRE as a way promote awareness of issues plaguing the youth. He wants to develop chapters across different areas to reach more people.

“FIRE is going to be everywhere. I’m never going to stop pushing FIRE.”