Service Brewing keeps on keepin’ on

Kevin Ryan gives us a status update on beloved brewery

When the pandemic arrived, Service Brewing found itself in a unique position.

The manufacturing part of the brewery was able to stay open and running, but the taproom had to close temporarily, then adapt to changing restrictions. Even worse, fter the loss of the St. Patrick’s Day boon, their distribution side is on the downswing.

But through it all, Kevin Ryan and Meredith Sutton have kept a positive attitude and not only kept their staff working, but increased their pay.

We talked with Kevin last week about how Service is doing, how they’ll move forward, and what he’s learned about himself as a business leader.

How are you guys doing? 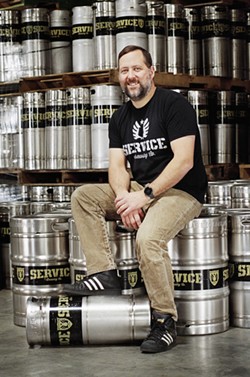 Kevin Ryan in the brewery. Photo by Tim Hutto

It’s like everybody else in the food and beverage industry. It’s certainly losing money every day, every week. We’ve been able to stay open the whole time, whether it’s just selling beer to-go so people can have something to drink at their house, or as things progress the opening of Georgia, putting seats outside so people can sit outside and enjoy beer. At the beginning of May we started having a food truck every Saturday to do to-go beer and food. The weather was just so amazing during this whole shutdown. People were just itching to sit outside and drink a beer and eat some food.

We’re just now in the process of working out details to get people back inside. I think we’re going to get about 32 seats inside. Our capacity is 299. The guidance that the governor gave, we could probably get 104 at 35% capacity, but we’re a brewery. Just like a bar, people are going to come out, they’re going to drink, they’re going to want to hang out and start to mingle.

We’ve got a lot of seating outside too, so we’re going to get socially distanced seating inside to try to control the groups so people aren’t wandering around. We’ve got high-top tables set up around the taproom and a couple seats at the bar, but really you come up and order at one spot, then go to your seat or outside. We’re not going to have people milling about. I don’t want to have to be that person that’s like, “Hey you over there.” We’re trying to separate them far enough so it’s not that natural tendency to turn around and start a conversation with somebody who’s close to you.

That runs counter to what usually happens at bars. What does it feel like to ask people not to do that?

Now is not a time to make a new friend. The last thing I want is someone to come to the brewery looking to enjoy themselves and there’s alcohol involved and get to a point where I have to tell them to follow the rules, and they get upset and what could’ve been a great experience for everybody turns into a bad experience for the guests.

What are some things you adopted during this time that you’ll continue moving forward?

The folks who created our point-of-sale system developed an app that people can download. It doesn’t allow you to order beer, but it does allow you to open up a tab when you arrive, and it allows you to close your tab. It’s just one more thing for those people who like that type of convenience.

How do you think things will be different for Service Brewing going forward?

I think our distributors who sell our beer around the state are going to be much more cautious about what types of beers they will buy from us or how much beer they buy from us, because they probably had it worse than us from a loss of inventory perspective. They bought everything they needed to buy from us to support St. Patrick’s Day that never happened. It’s a huge volume of product that was in their warehouse waiting to go out and didn’t.

From the taproom perspective, I think it’s just a matter of time before it gets back to that level of regularity that it was at previously. We might even have more people that know about the taproom now because of the shutdown. More people were looking to do something that they could do. There were fewer things to take their attention. It was like, “Oh, what’s open?”

A lot of people have been like, “Oh, I drank your beer for a while but I’ve never been here.” They got a chance to come out and visit the staff, see the taproom that will open someday.

Most important for us in staying open was to be able to keep all of our staff employed and working, instead of being at home and potentially doing unhealthy things. We kept everybody, we increased their pay and kept them all working 20 hours a week for the part-time staff. They could maintain an income and still have some social interaction from a distance.

What have you learned about yourself as a business leader during this time?

I think it reinforced [that] my optimism is healthy and can be contagious. A lot of people were very nervous—“Oh my god, what are we going to do? Are we going to have a job?” It can be infectious if you’re negative about what’s going on. You can very easily pass that negativity on and upset your group, versus people who are confident that they’re going to stay employed and confident that we’re going to make it through this.

As challenging as it has been, personally, I have not felt a great deal of stress behind it. Now, when the first PPP loans came out and expired before we got any help from our bank, it was a little upsetting. We went from a big national bank to establishing a relationship with a smaller local bank that took care of us and will have our business going forward based on that. Someday in the future, there’ll be a big ol’ investigation into how banks manipulated the applications to get their larger customers.

What’s next for you guys?

We’re getting ready to bring back Bluegrass by the Pint, and [City Hotel] will be onstage Friday night. We’re trying to get them back into a regular Friday night gig. We’ve had a lot of people who miss their Friday night appointment at Service Brewing, whether it be musicians or guests who love to come hear those guys play. It’ll help us, and that’s why we do it, but it’s also great for the community so people can feel a little more normal again.