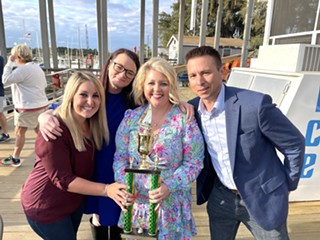 Photo by Bunny Ware
The Connect Savannah team accepts the Ships Spirit Award March 19 at Hogan's Marina from David Moses, founder of Shamrock Ships Flotilla, right.
The inaugural Shamrock Ships Flotilla and Soiree held March 17 on St. Patrick’s Day at the Savannah Convention Center brought in about $3,000 for area charities. David Moses, founder of the Shamrock Ships Flotilla and Soiree, said about 250 people watched from the socially-distanced seating at the convention center as ships passed on the Savannah River, dressed in green and celebrating the Hostess City’s Irish heritage. Trophies were handed out for Ship Spirit, Decoration and People’s Choice Votes Friday at Hogan’s Landing following the St. Patrick’s Day event which brought a safe parade back to Savannah this year. “It’s not the first time someone thought to have a boat parade, but it is the first time we’ve done it in Savannah under these challenging circumstances,” Moses said. The People’s Choice Contest, as voted on at voteboats.com, awarded a boat spearheaded by Meredith Bannon and Aaron Hall with Hopeful Horizons. They donated their winning portion to Hopeful Horizons.

"It’s not the first time someone thought to have a boat parade, but it is the first time we’ve done it in Savannah under these challenging circumstances." — David Moses, Shamrock Ships Flotilla founder

The Best Decoration trophy was awarded to the boat named “Seldom Sober,” and headed by Steve and Beverly O’Hearn. The Ship Spirit trophy went to Connect Savannah, headed by Publisher Erica Baskin. “There was a lot of spirit,” Moses said. “Here at the Shamrock Ships Flotilla, we believe that ship spirit is an integral part of our mission.” Moses announced three winning boats from the Wednesday event while attendees dined on food from the Burger Boat and sipped on concoctions from Cheers to You. “Thank you so much for being here and thank you so much for sailing on Wednesday,” Moses said Friday among flotilla goers who gathered at Hogan’s Marina to hear the wrap-up of the event.