Michael Corbett recounts his own ordeal and crisis of faith, from Boston to Savannah

A KEY SCENE in the movie Spotlight — which just won the coveted Best Picture Oscar — is when the Boston Globe investigative team finds the paper trail of transferred priests the Boston Archdiocese knew were guilty of child sex abuse.

Watching the film in Savannah, when Michael Corbett saw the real name of the priest who had abused him flash onscreen, it was a bittersweet moment of triumph.

“That whole montage, where they start finding all the names and begin unraveling the church’s coverup, really hit home,” he says. “It was a real sense of validation.”

A longtime counselor at Savannah Arts Academy after his move here from Boston in 2005, Corbett says he was the target of abuse by Father Robert Gale in July 1993.

The arc of his recovery has been long. Only recently has he been able to fully come to terms with the abuse and its impact on his life. 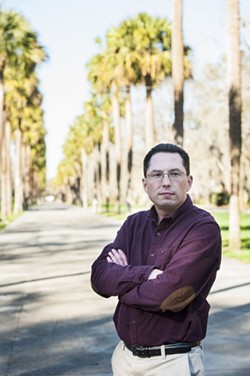 Photo by Geoff L. Johnson
While Corbett counts himself among “the lucky ones” who weren’t fully coerced into underage sex, that one violation of sacred trust began years of psychological and emotional trauma, including hospitalizations, PTSD, and a crisis of faith.

It happened like this: Father Gale had just finished baptizing Corbett’s cousin, and asked Corbett, then 17, if he’d like to come back to the rectory awhile.

“On the way there he was sort of tickling me, laughing, hugging me,” Corbett recalls.

“You have to remember this was a trusted family priest, and I was actually considering becoming a priest one day myself. So I was on cloud nine. I was getting so much attention.”

Corbett says once they got to the rectory —where the priest had a small bedroom adjacent to his office—Father Gale then in full view stripped down to his underwear.

“He said he wanted to get out of his priest clothes,” Corbett says.

There were sexually charged words from Father Gale, “talking about how it’s good to hold on to your virginity as long as you can, but eventually you find the right moment to lose it,” Corbett recalls.

Then, Father Gale began giving Corbett “Eskimo kisses,” and then tried to kiss him on the mouth.

“He said, ‘Priests have sexual needs too,’” Corbett remembers. “I pulled away and said ‘I’m not gay.’ He told me, ‘One homosexual experience doesn’t make you gay, it’s the lifestyle that makes you gay.’”

When Corbett got up to leave, Father Gale asked him for a kiss. Corbett said no.

“He then started talking about how embarrassed he was,” Corbett says.

“That’s how brilliantly manipulative these people can be—I actually left there feeling bad for him.”

While Corbett counts himself among “the lucky ones” who weren’t fully coerced into sex, that one violation of sacred trust began years of psychological and emotional trauma, including hospitalizations, PTSD, and a crisis of faith.

Making the matter worse—as the film itself makes clear—was a corrupt system that covered up the repeated abuse, and failed faithful parishioners time and again.

“Later I confessed a minor sexual activity to a priest in confession and was told I had committed a mortal sin,” he remembers.

“I was treated like a dirty Kleenex and told, ‘You need to get yourself some help.’” 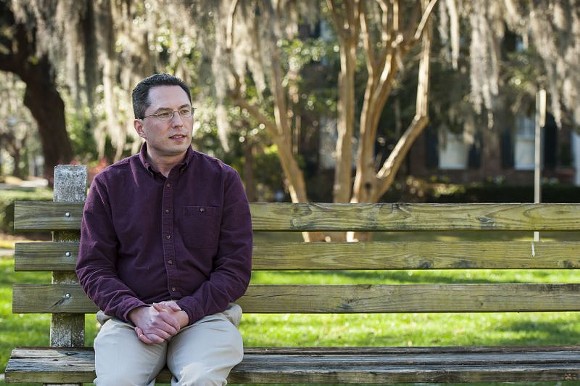 In early 1994, Corbett finally got up the courage to mention the abuse incident to his therapist at college—who was also a priest. “He had me report it, but that was it. Nothing ever came of it.”

In 1995, Corbett transferred to another college and worked closely with a Dominican priest who was head of his department.

It was then that Corbett began having vivid nightmares and flashbacks, “which were confusing,” he remembers. “I asked the priest what to do about it, and he said to do nothing and keep quiet about it.”

Rebuffed at every turn, Corbett’s resulting feelings of hopelessness and profound solitude kicked off a decade-long struggle with depression and anxiety, which he says only concluded with wellness in 2014, here in Savannah.

But back in Boston, in March 1996 came Corbett’s first overnight psychiatric hospitalization. By that summer, “I decided I was not healthy enough to return to school and took a year off to stabilize.”

Despite the ongoing struggle, Corbett persevered and was able to get his undergraduate degree in psychology in 1998, and later a master’s in 2000.

The turning point came in a therapist’s office in 2001.

“When I mentioned the incident with Father Gale, it was like the therapist said, ‘Thank you, now we see what this is all coming from.”

Why didn’t he mention it before?

“Two reasons. First, I didn’t consider it sexual abuse because I wasn’t actually molested. Second, prior to this everyone I told about the incident just said it was no big deal, that I should just shut up and be quiet about it.”

As the film also makes clear, were it not for the September 11, 2001 terrorist attack, the scandal would have been the biggest national news story in a very long time.

Corbett went public and was interviewed at length by none other than Walter “Robbie” Robinson, lead editor of the Spotlight team, portrayed in the movie by Michael Keaton.

Corbett says Keaton did a great job in the film, but remembers the real Robinson as a taller man with even greater gravitas and sensitivity.

“Robbie treated me like my own individual story was really important. A lot of it sort of flooded back to me when he interviewed me,” Corbett says.

Father Gale never faced criminal charges for his abuse of Corbett. But as a result of the Globe investigation, Father Gale was arrested and indicted in 2002 for the rape of a Wortham, Mass., boy during the 1980s, from the ages of 10-15.

As part of a deal between the Church and the court, Gale, then 63, only received a maximum five-year sentence. He was released in 2009.

Corbett, along with many other victims, sued the Archdiocese in a civil action and won a settlement. As part of his healing process, he decided to visit Father Gale in prison.

“He was a bit upset to see me,” laughs Corbett. “He said my charges were pure fantasy.”

Corbett notes the priest made a point of saying, both in court and to him, that he never abused anyone after 1987 — the year the Archdiocese quietly began a program in Connecticut called the Institute for Living, “just for priests who had abused kids.”

By 2005, Corbett had married. Trying to start over, he moved to Savannah and took a job as counselor with the Savannah-Chatham Public School system.

But, he says, “When I moved to Savannah it all became a secret again.”

Corbett says while Savannah is, like Boston, very strongly influenced by the Catholic Church and in particular the Irish Catholic tradition, he insists “It’s still nowhere near as intense as up there. In Boston, the archbishop is literally one of the most powerful people in the state.” 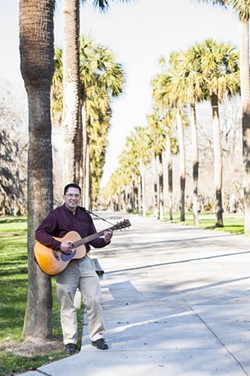 Photo by Geoff L. Johnson
Corbett's passion for the guitar has provided him great solace, he says.

Corbett, who currently attends the Unitarian Universalist Church of Savannah, says his crisis of faith is still ongoing.

“It was a slow process, like how the Titanic took a long time to sink. I drifted further and further away. At first I started calling myself a lapsed Catholic, then I said I was agnostic. Now I just call myself spiritually confused. I have no idea who I am.”

The release of the movie Spotlight—which he’s seen several times already— was a kind of sign that it was OK for him to tell his story to the world.

“There might be at least 20 people in Savannah 30-60 years old, still hanging onto something like this,” he concludes.

“Imagine if back in the 1960s all those victims felt able to come forward. How many like me would have been spared?”

Corbett’s not worried about what students or colleagues will think about him going public. “We have to educate people about these things, especially young people. That it’s OK to come forward.”

He says the best part about Spotlight winning Best Picture is that “in 25 years some young film enthusiast will look at the list of Oscar winners and decide to watch Spotlight. Then this important story will be told again and not forgotten.

“A new generation could learn about the dangers of unchecked authority and blind unconditional trust.”

Shining a Spotlight on Oscar contenders