Shooting for a comeback

After Savannah's blockbuster summer, we may be closer to restoring the film industry here 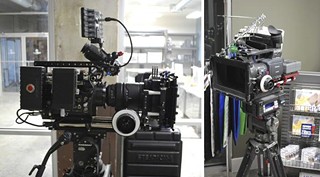 As the fond memories of our brush with celebrity during last summer's shoots for The Last Song and The Conspirator begin to fade, the state and the greater Savannah area are still making efforts to secure the future of the entertainment industry here.

One of the most important aspects of the long term success of the industry locally and in the state is tied to the incentives that help draw features here in the first place.

Created in 2005, the film production tax incentives have been modified over the years, and since 2008 have found a sweet spot wherein they are both valuable and economically sustainable.

"We think we have a good program," says Bill Thompson, Deputy Commissioner of the state's Film, Music and Digital Entertainment Office. "It feels like we're at the right spot, and we don't plan to chase the other states."

Currently, a production that spends over $500,000 can qualify for a 20 percent tax credit. They can earn another 10 percent if they include a Georgia logo somewhere in the finished product.

For a couple years toward the end of the last decade, states like Louisiana, Michigan and Iowa were involved in a race to the bottom of incentive rates, but several ended up losing money when their rebates went too low and had to scale back.

"Georgia went about their film incentives in a very smart way," says Jay Self, Director of the Savannah Film and Tourism Commission. "It probably has a much longer potential life than ones other states have put in."

One of the aspects of Georgia's incentive plan that has also helped it is the relative ease of the program.

"If it's not the easiest plan in the country to use, it's gotta be right up there," says Don Mandrik, a Co-founder of the influential consulting firm Georgia Production Finance. "I know the folks involved on legislative side went to great lengths to make it easy to use."

It was the strength of Georgia's incentive plan, and the ease that drew Disney to Georgia to shoot after there seemed to be a disagreement between North Carolina's Governor and Legislature over the incentive program.

"Their executive in charge of tax incentives said that Georgia had the best incentive, it may not be the most lucrative, but Georgia speaks with one voice," Self explains.

Although common wisdom once believed that lowering rebates to attract film productions would eventually create critical mass for the development of film industry infrastructure, the belief is now that by establishing a solid, sustainable incentive, we can slowly build credibility and infrastructure.

Self agrees that investment will come to Georgia so long as the incentive stays where it is.

Just because the feature films are gone for now, doesn't mean that the film industry has abandoned us completely . The less glamorous side - catalog shoots and student films - represents an important part of the local industry.

In 2008, TVproductions, including Ruby and an ABC pilot called Solving Charlie, among others, had an economic impact of more than $2 million. Still photography for things like catalogs had an impact of nearly $4 million on the local economy.

"There are some things that flourish in a recession and some things that don't. Commercials and still photography go down," says Self, who estimates that 2009, minus the features, brought in about a tenth of the business of years past.

The features may have come in and buoyed what would have been a very slow year, but things are finally starting to look like they're recovering. There have already been four large catalog shoots and the number of permits for student films is up significantly.

The local industry has gotten another boost from the opening of Meddin Studios in the former slaughterhouse-turned-artist-studios on Louisville Road.

In the last few weeks Meddin has hosted car commercial shoots, a few music videos, an Oscar party gala, a fashion spread and sold some computers. They also got a visit from the President of the United States, who wanted to check in on how well their Recovery Act-backed Small Business Administration loan was working for them.

"The main reason that we wanted to highlight what they're doing is they took advantage of an SBA loan to get this thing started," Obama said during remarks after his visit. "I was just finding out how that experience was. I'm sort of doing a customer satisfaction survey here."

Meddin is a unique addition to the local media industry because of the range of equipment, facilities and services they offer to local, regional and visiting professionals alike.

The building now houses soundstages, post-production facilities, conference rooms and an equipment shop. Although they aren't quite big enough to cater to the needs of a big feature shoot, they are equipped to dramatically improve the abilities of television, indie films, local producers and more.

"Having a resource like those guys in town is pretty valuable," says Jody Schiesser, an Associate Producer with Ruby, who also makes films in his free time with a local group called Perpombellar Productions. While working on the 3rd season of Ruby, they suddenly needed equipment, which Meddin was able to help with. "Usually we had to ship things in from out of town, but with Meddin being here, we were able to get everything we needed locally."

Because of the diverse range of services they offer, the team at Meddin doesn't need to wait for the next round of big productions to come through town before they can count themselves as successful.

"Our performance isn't based off feature film at all," says Nick Gant, one of the facilities co-owners, "but obviously when you get something like the Conspirator or a Miley Cyrus film, it increases interest and there are more people looking at Savannah."

One of the truly unique offerings from their new facility is Asset Management - not like financial assets, but film assets - for example they will help archive and catalog unused footage and B-roll so that it can be recycled in future projects or re-sold to other potential users.

They'll also help digitize and archive old footage so that it can be made available online.

"If you had a box of footage up in the attic, that you don't even know what's on it, some old 16mm, you can bring that footage in here and we could digitize it," Gant explains. "We've had some footage turned into us from Pearl Harbor, actual footage that came from somebody's great grandfather's locker."

They've already managed to do quite a bit considering several of the rooms in the facility were still under construction as recently as two weeks ago, and it bodes well for their future here.

"Meddin is going to enable local people, producers, directors to work at a higher level than they were able to before," Self says.

While Georgia may not replace Hollywood anytime soon, at the moment, it seems like Savannah and the state are positioned well for the future.

"Georgia has everything we need to have a very sustainable, very profitable film industry. Not just one off projects, but a true industry," Mandrik says. "A producer would be hard pressed to make the argument to shoot elsewhere."