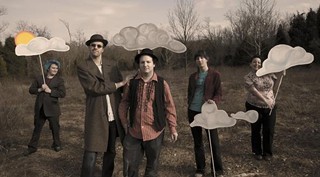 At the end of March, the Knoxville-based band Shortwave Society performed at that city's Big Ears Festival, alongside Sufjan Stephens, The National, My Brightest Diamond and others who continually push the musical envelope.

"I really felt like it was one of the first times we found our tribe," says the band's keyboard player and co-writer Jason Day. "A lot of these bands were primarily from the New York scene - St. Vincent, Dirty Projectors and all those guys. They came down and I really felt like we were home with them.

"Touring regionally, and primarily in the southeast, as to where we fit in, we're still trying to figure that out."

Certainly there were few prototypes for Shortwave Society - the band plays pretty straight-ahead pop music, heavy on the intricate harmonies, with violin, cello and laptop electronica driving the guitar and piano forward.

"We started out just playing a bunch of Beatles tunes, the Beach Boys and Brian Wilson," explains Day, who's a trained jazz pianist. "All kinds of things like that which were definitely the roots of the idea.

"Alexia (Pantanizopoulos) and Sarah (Hurd) were classically-trained string players who also loved pop music, and my background is in academia. But the other songwriters in the group are more fans of pop music.

"We started combining those worlds, and getting into the electronic world, too. Trying to figure out how to execute some of this stuff live, we started bringing in laptops and things like that."

Selling this extremely creative idea to Knoxville bar owners, used to the standard crowd-pleasers, wasn't easy. "We did it because we wanted to cover some of that music. With with Grant Geren's songwriting, it wasn't long before we were like ‘Let's try some of our songs.' I was doing some arranging and co-composing, and next thing you know, we had a band."

Curtis Geren, who's also a drummer (live drums tend to drown out the strings), adds orchestral flourishes, washy electronics, percussion and other unexpected delights into the mix.

Shortwave Society went through a Brazilian music phase, and a classical period, and they still roll around in Radiohead, Stereolab and early Talking Heads territory.

These days, however, they're focused on creating their own fusion.

"After a couple of years of experimenting, we really started to get it dialed in," Day says. "I feel like we're still learning and growing and figuring it out, but we've got it pretty together by now." Listen & learn: www.myspace.com/shortwavesociety

For the 24th consecutive year, the Coastal Jazz Association pays tribute to Duke Ellington with a concert of the master's music. Trumpeter (and all-around multi-instrumentalist) Longineau Parsons guests with the Savannah Jazz Orchestra, which features the standout vocals of Priscilla Albergottie-Williams. April 29 would have been Ellington's 111th birthday, by the way. Listen & learn: www.coastal-jazz.org.

I recently heard a track from Culberson's forthcoming studio CD, and the combination of his blistering, bluesy electric guitar and a new, more rock ‘n' roll approach to song structure, well, it was just phenomenal. The workaholic band has two South Carolina dates this week, and two here in Savannah, Culberson's appreciative hometown. Listen & learn: www.ericculberson.com.

Wayne Flynn and Sonny Bond are the lead singers and guitar-slingers in this heavy-duty Savannah rock band - John Howell plays bass, and the drummer is the estimable Brian Neal. Brokn Tyme has been a fixture (and a favorite) on the local metal scene for years, and the guys routinely tour up and down the Eastern Seaboard - this week, you can catch them twice here in the hometown. Listen & learn: www.myspace.com/brokntyme.